Later this week forex market participants get to deal with the US Non-Farm Payroll release which is one of the larger market moving events for the US Dollar. As we await the release, let’s take a moment and analyze the EUR/USD price pattern using Elliott Wave. This will allow us to establish a game plan for key patterns with levels we are watching prior to getting emotionally involved in the NFP release.

There are 3 higher probability patterns we’re watching. Last week, we identified 3 potential patterns in EURUSD that called for at least a 150 pip rise to 1.1050.

EUR/USD did eventually make it to the 1.1052 which was the minimal retracement we were expecting. Those 3 patterns are still in play and in each scenario below, they are discussed in more detail.

Bottom line, between now and 1.0800, EUR/USD has several wave relationships to cut through. Elliott Wave is probabilistic in that if the pattern is still possible because it doesn’t violate Elliott’s rules, then we have to be open for it to occur.

As a result, we essentially look to those price levels where patterns begin to be eliminated. The most important level according to this analysis is 1.0800. A print below 1.0800 elevates the bearish scenarios that we likely visit at least 1.05. The inability to penetrate 1.0800 leaves the door open for a move back towards 1.11-1.13 and possibly higher. Therefore, watch your downward sloping trend lines. If they break (currently near 1.0950), then bears can put away their claws for the short term. 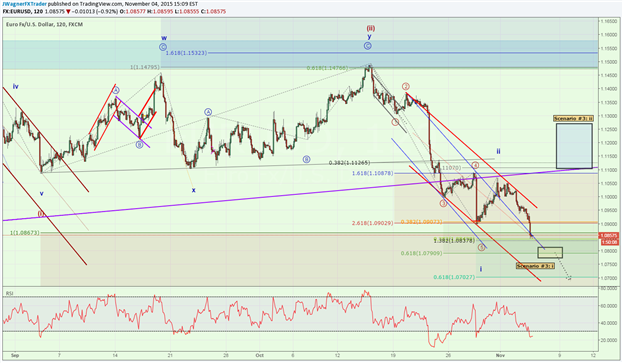 Wave (iii) typically has a Fibonacci relationship in distance to the length of wave (i). Typically it is a 1.618 relationship and the 1.618 measured move target is 1.0480.

When trading wave (iii), if you miss the initial start of it, then wait for prices to expand 1.10 times the length of wave (i). At this point, the equal wave corrective move becomes less probable and it becomes a higher probability move towards the 1.618 measurement. That corresponding level in this case is 1.0800. Additional technical analysis shows the July 21 low is around this same mark. 1.0800-1.0820 will be a point of contention between bulls and bears if price does get there. A break below 1.0800 elevates the potential for a move towards 1.0480.

Suggested Reading: How to Use Alternating Waves in a Forex Strategy

As hinted to above, one alternate we are watching is the whole move from August 24 is an equal wave move labeled (a)-(b)-(c). In this scenario, prices have already met the equal wave measurement near 1.0867. Therefore, a pivot higher would take place near current levels and likely above 1.0800 that eventually retests the 1.17 area. 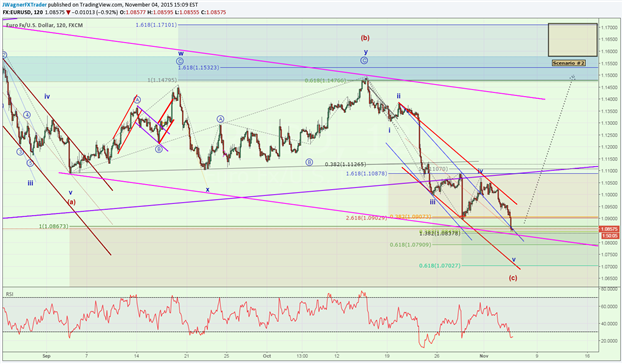 We can see some Relative Strength Index (RSI) oscillator divergence at the current price level. As mentioned above, look for prices to break above the red trend line to begin elevating this count.

As described above, the pattern since August 24 currently carves out as a 5-3-5 (meaning 5 waves down, 3 waves up, 5 waves down). This could represent an equal wave pattern or we may have simply finished the first leg down of the 3rd wave.

This scenario will behave in similar fashion to the equal wave scenario. Prices are likely to find support from near current levels, then bounce higher towards 1.11-1.13. Since this scenario has some characteristics of both scenarios #1 and #2 above, it will be more difficult to pick up in real time. Follow the key levels noted in #1 and #2 above. Namely, a break below 1.0800 for bears and a move above the red trend line for bulls near 1.0950.

Which count is preferred? Both are at a point where something will need to give soon. If we bring SSI into the picture, bullish sentiment is picking up as long positions are 3% higher than yesterday and longs are 9% above last week. At the same time, bearish sentiment is closing down as shorts are 8% lower than yesterday and 24% below levels seen last week. As a result, SSI increasing to +1.48 is taken as a contrarian signal and suggests further losses may continue in the pair which gives preference to scenario #1 or #3 above.

If price does work down towards 1.0800-1.0820, check our real time SSI to see if sentiment continues to shift towards the bulls which taken as a contrarian indicator suggests a breakout lower may be looming.

Additionally, EUR/USD tends to have a seasonality bias towards losses in November. Christopher Vecchio brings this to light in his November 3 article.

Lastly, Kristian notes the timing of the EURUSD low near this 1.0860/70 area could offer support to a bounce.