Macro Musings: Who Thought The Fed Would Raise Rates in 2015?

I did, along with a majority of investment banks on Wall Street. However, a scary scenario has developed. The Fed held and the USD rocketed higher and equities has dropped. Another scary recognition is starting to come upon investors. In short, the models by which Central Banks have been guided by may have a bug.

Debugging the Fed and Seeing What’s At Hand

What is the bug? Inflation isn’t something that one can conjure up in hard assets as much as softer assets. So what worked? We now understand that asset prices can be inflated. As long as you keep the denominator the same and add to the numerator, the whole number will increase. However, the value doesn’t really change, even if the price tag does. This hurts once people realize that the buyers are less and less and the supply remains higher.

Unfortunately, for the central banks, one sure path has led to cleaning out the flood of excess capital in the system and allowing the system to correct itself. Deleveraging, very painful deleveraging worked in the 1930s in the US, 1940s in Europe, and 1990s in Asia. Taking a look at Oil, which along with EMFX is the poster-child of the current inflation slump, price consistently runs into resistance and any pop in price encourages more supply to come onto the market. As Econ 101 told us, that pushes price back down as the demand currently isn’t enough to demand this new supply.

How Is This Being Played?

In short, buying bonds outside of the US seems to be a favorite strategy as well as back end US debt-buying. The Fed is now looking outward, this tells us that other economies are having a hard time keeping up and should the Fed start to raise rates, the economy may found itself out of sync, which could cause the unstable recovery to dip back in.

Where has all the liquidity gone? While history doesn’t repeat, it often rhymes and one of the cleanest rhyming patterns we’ve seen of late is a continual decrease of the Fed Dot Plots. The Fed Dot plot measures out where the Fed Members anticipates rates to be over the next 3-years in an anonymous reading. What’s scary to many and keeping bond buyers from holding on for dear life is that none of the factors that would send the dot plot higher are playing out and we’re seeing some of the conditions even worsen. 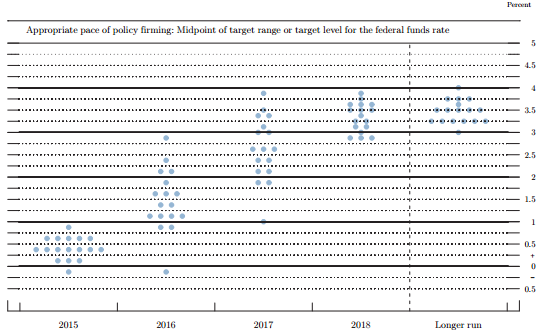 The scary question to ask is whether or not we’re seeing a mean reversion in process or a liquidation? Mean reversion is optional and performed by supposed rational market participants. Liquidation is forced and leads to the forced deleveraging. Also difficult, liquidation forces people to say they were wrong when prolonging and pushing the envelope of the system whereas mean reversion can allow people to say the system was simply over-heating. However, humans are notoriously bad at calling a top and it takes a large price change to change the mentality of the public so that once a liquidation is recognized on the large scale, opportunities will likely begin to emerge. For a case study of poor timing, it was in December of 1996 that Alan Greenspan rhetorically asked, “How do we know when irrational exuberance has unduly escalated asset values.” Equities didn’t top for another 3.14 years.

Overview: The path of least resistance appears to sell assets in Emerging Markets continues, which has led to a stronger dollar as a lot of borrowing that sent money to those economies are unwound. Currently, we’re not seeing the turnaround that many expected and that we’ve come to expect like developed after the drops of 2010 flash crash, 2011 government shutdown, 2012 European Sovereign Crisis, or the late 2014 Bond Flash crash. However, the Yuan devaluations communicate that the all is not well as we were told would be the case when governments eased. What is presumed is another wave of central bank liquidity with the emerging markets really started to show there hand in helping, what’s unsure is how the USD will react. My money is that it could continue to strengthen regardless of the central banks wishes.

We’re coming upon the Caixin China PMI preliminary readings that will help us see whether or not the Fed was early or late in reawakening fears about China when they decided not to raise rates. Chinese manufacturing PMI is at multi-year lows and a continuation of that trend (move below 47) would likely aggravate Fed and other central bank concerns. A break back above 50 could lead to a risk-on / relief rally but is currently seen as a lower probability play.

China’s planning body has said they see 7% economic growth this year, says Xinhua citing spokesman of National Development & Reform. Additionally, IMF’s head Lagarde says China slowdown is major risk for global economy and she has called the slowdown in global productivity troubling. The print tonight can let us know whether her view is warranted.

While Central & Eastern Europe as well as Africa isn’t as commodity dependent as other emerging markets, they do look to their trade partners for economic partnerships. As noted above, if a further decline is shown on the Caixin China PMI print, it could encourage the SARB to remain on hold as the Chinese slowdown communicates a larger problem before these regional economies can be revived. The rand has weakened after a short-stint of strength against the US Dollar after the Federal Reserve decided not to raise rates.

The Ukraine has suspended bond payments, including one note due on Wednesday, as they begin an $18 Billion restructuring plan that investors aren’t accepting terms on yet. The struggle has led to frustration for Ukraine’s government whose finance minister noted, "I call on all bondholders to support the proposed exchange…No creditor will be offered better terms than those of this exchange."

Looking Ahead:South Africa reports August CPI Wednesday, and is expected at 4.8% y/y vs. 5.0% in July.

The Brazilian Real has recently dropped to its lowest level as the countries budget faces a potential veto after they were downgraded to Junk status. The good news is that historical implied volatility aren’t skyrocketing like many would expect. This calm chaos seems to lead to the view that the Brazilian Central Bank or BCB will not increase intervention regardless of the ~40% drop of the BRL and the political woes currently at hand.

USDMXN trades at 2-week highs as US Treasuries and MBonos pushed lowered. The US hike probability is diminishing, as March 2016 is now the first month where a rate hike from the Fed is seen above a 50% probability. Because this drop is being blamed on world growth expectations, the deterioration of EMFX vs. USD could continue, pushing USDMXN higher still.

Written by Tyler Yell, CMT of DailyFX; you can join his distribution list with this link, and you can talk markets with him on Twitter @ForexYell