Macro: Mondays madness really focused on two FX themes that were equally impressive to market participants as the US 30 opening down 1000 points. The EUR & the Emerging Market currencies. Both tell a larger story as to what’s going on with what has driven the market over the past few weeks.

First, the front end of the debt market out of the euro zone has been yielding negative rates. What you have here is the breeding ground for the carry trade. Click here to learn more. If you want to borrow a currency in order to invest in a high-yielding currency, why not borrow currency that is yielding negative? That was the question many investors asked, which resulted in an answer of, 'absolutely how much can I get?!'

Typically, what happens when the carry trade is engaged is that risky assets are purchased. An example of risky assets are high-yield debt, which is debt written on sovereigns with lower credit ratings or companies with an unstable balance sheet. Money also often flows to high-performing equity markets such as the Shanghai composite or the NASDAQ 100 of the United States.

The problem with this approach is that pretty much everybody then is in a similar trade or at least funding the trade with a similar currency and that has been the EUR. While the destination of investment may vary, they’ll seek one thing, high-yield. When investments are entered solely because of its performance, few are willing to wait it out on a down turn and rather cash in their chips when performance turn south. Over the last week, this is exactly what happened. By the way, the rush of investors to cash in their chips on a carry trade is known as the carry trade unwind. This unwind was seen via a large drawdowns in “risk-on assets” and a forced repurchasing of the EUR that funded these trades. 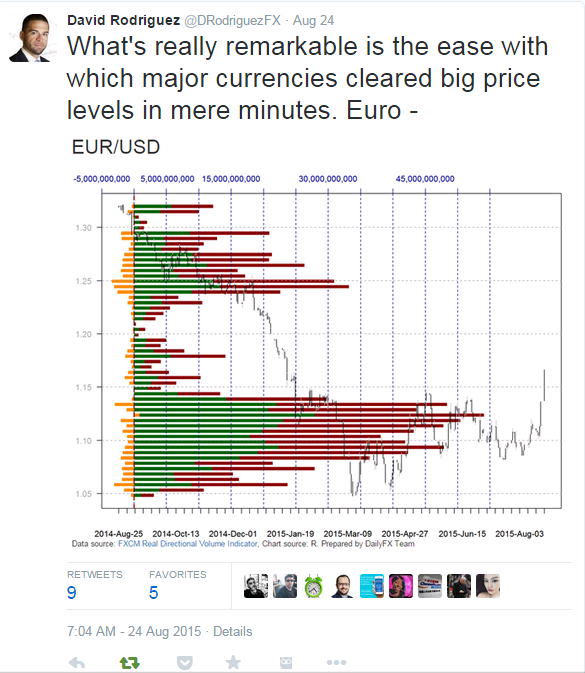 Overview: China cut interest rates for the fifth time to stabilize markets after many flash crash dominated headlines to open the trading week. Rallies in emerging-market asset classes should be suspect until a larger fundamental story changes, which could take a long period of time.

With all the headline stories in FX this year, whether it be the Swiss National Bank forfeiting their peg to the EUR, the European Central Bank engage in quantitative easing, or the US dollar pricing in the first rate hike and nine years, the story that has everyone’s attention now if yuan devaluation. While larger markets were stirred by the announcement on Tuesday, August 11, it is safe to say that smaller economies have been shaken to the core.

Key focus has been on the Korean Won and Japanese Yen among others in the region who have just seen a regional competitor in China gain a key advantage in exporting with their now cheaper currency. The immediate effects have been market disruption, which typically means the models have to reconfigure their inputs but the longer-term effect will be to see downside risk to inflation which could offset some of the fragile momentum building and global markets. 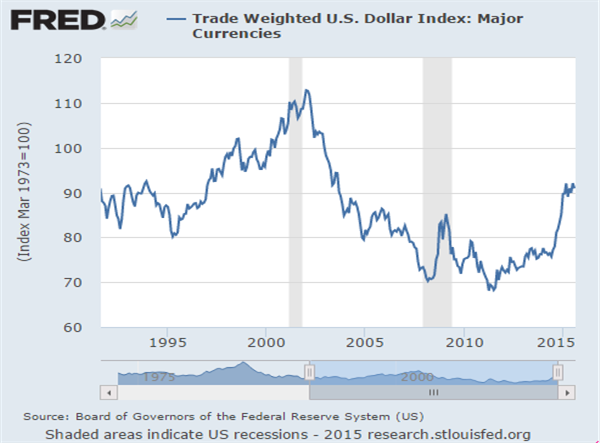 Looking at the trade weighted index above, you can see why developing and frontier economies are having a tough time. Not since the painful deleveraging post the Asian financial crisis has the dollar been this strong against Asian currencies on a trade weighted basis. Now, any business done with the US is done with a weaker currency.

The South African Rand has been another public victim of recent dollar strength. Recently hitting record lows against the USD, the South African reserve bank is now deemed more likely to raise rates. By looking at forward rate agreements, a contract where bets are made on interest rate directions, traders are seeing that the central bank has more room to raise rates in order to stave off inflation should the Rand fall even lower. However macroeconomic weakness seems to have the SA economy standing on the proverbial thin ice.

The commodity bear market has been specifically cruel to South Africa, who depends on commodities for more than half of their exports. This keeps South Africa particularly keen on a rebound in China and it’s easy to see why the Shanghai composite falling by the most since 2007 along with base metals falling your 16 year lows have brought down the South African Rand.

The next emerging market focus turns to Latin America as many record lows were printed against the US dollar on Monday's open. USDMXN printed 17.25 on Monday followed by USDBRL hitting 3.58 after consolidation around 3.55. Brazil among other Latin American economies are seen as a key victim of the Yuan devaluation. Lastly, USDCOP also printed a fresh record high at 3237.4.

Markets are now focused on the potential for Mexico intervention. Similar to South Africa, there is hesitation to let the currency fall too far. However, Mexico was also victim to the non-relenting slide in oil prices.

Looking Ahead: July trade balance for Mexico on Thursday.

Written by Tyler Yell, CMT of DailyFX; you can join his distribution list with this link, and you can talk markets with him on Twitter @ ForexYell