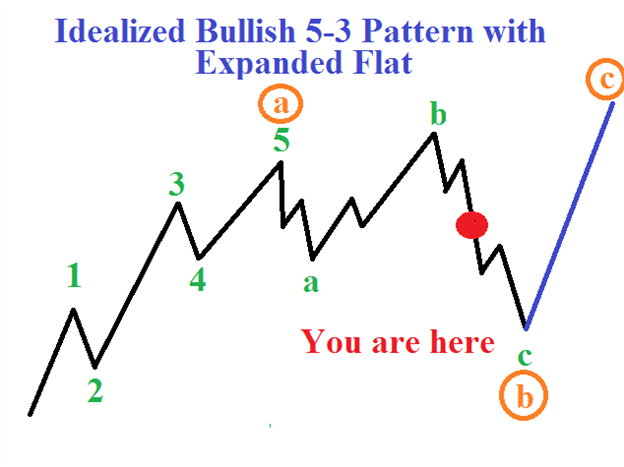 With the EURUSD breaking below 1.1200 earlier today, it elevates the potential of an expanded flat downward correction according to Elliott Wave Theory.

For those unfamiliar with Elliott Wave Theory, it is a form of technical analysis that assesses the characteristics of the waves without regard to the corresponding news. When reading this article, remember that Elliott Wave is probabilistic in that anything is possible so long as it conforms to the Elliott Wave theory rules.

With that said, each pattern has an idealized look and guidelines exist as to its ‘typical’ shape. Those counts that fit many guidelines are considered higher probability in nature, but that doesn’t mean what is anticipated will occur. As with any risk in the market, know where you are wrong and get out of the trade when the market is carving something else.

Last week, we identified two wave patterns that were higher probability and called for shorter term moves higher. The challenge was, however, that so long as we held below 1.15 we needed to respect the potential for a drop to 1.09-1.10.

Well, now that prices have broken below 1.1200, this elevates the expanded flat pattern identified last week as the higher probability move.

The higher probability scenario we are currently tracking is a smaller degree expanded flat correction that eventually works down towards 1.09-1.10.

Expanded flats are corrective moves meaning they move in the direction against the trend. In this case, since it is a downward expanded flat correction, we can anticipate that once this flat is exhausted, we’ll see a continuation of the EURUSD trend higher (see idealized pattern above).

Therefore, it appears we are in the middle of wave the (c) wave lower. Since the (c) wave typically acts as a false break on the (a) wave, prices could dig into the 1.09 handle.

(Click on the chart to zoom in; after zooming in, press the play button towards the right to set the market in motion since the chart was created)

Expanded flats are challenging patterns that are designed to fool many traders. It is essentially a dual false breakout pattern. We experienced a false breakout higher above the June 4 high which means we’ll likely see a false break below the June 5 low.

Once this expanded flat is exhausted, there will be an opportunity to buy the EURUSD and target new highs above 1.15. Therefore, if a trader enters near 1.10 with a 1.08 stop loss and a target of 1.15, that provides a target 2.5 times the distance of the stop loss.

As mentioned above, Elliott Wave is probabilistic in that nothing is certain, simply likely. Therefore, another option which would transpire calls for a break below 1.0815. Therefore, this 1.0815 level is key to determining the direction of the medium term trend.

Other wave counts (press the PLAY button towards the right of the chart to see market movement since the analysis was made):

How Much Juice is Left in USDJPY Bulls? (Daily Chart – June 9)

Make sure to join me Monday mornings at 9:30a ET inside the DailyFX Plus Live Classroom for the US Opening Bell webinar [free registration]. In this webinar, we analyze the major FX pairs using Elliott Wave technical analysis. The next webinar is Monday July 6.

Want to follow the Elliott Wave analysis on the EURUSD beyond the news event? You have the ability to copy my charts above so they appear on your desktop exactly as shown above. Email me at jwagner@dailyfx.com if you wish to receive instructions on how to do so. Feel free to comment on the chart with your views.