A few weeks ago, I mentioned a major trend line that the NZD/USD was approaching. It was a situation that I said could lead to a short signal if it had a daily close below 0.7915. Several days later, the Kiwi did close below that level and triggered a profitable trade for those acting on the breakout. But for those traders that missed out on the initial break of the NZD/USD, we could have another opportunity to trade this pair. Today we will look at the New Zealand Dollar and the US Dollar and decide if another short position makes sense.

To recap the previous opportunity, I have created the chart below. NZD/USD has been in a sharp downtrend since July. Not much has gotten in the Kiwi's way (including the major trend line at 0.7915). Traders that entered the day that this pair closed below the trend line, experienced 150 pips of potential profit before the subsequent reversal. There was a very strong bounce off of the psychological 0.7700 level which coincides with the previous lows as well. This is important to note because we will use this level later on. 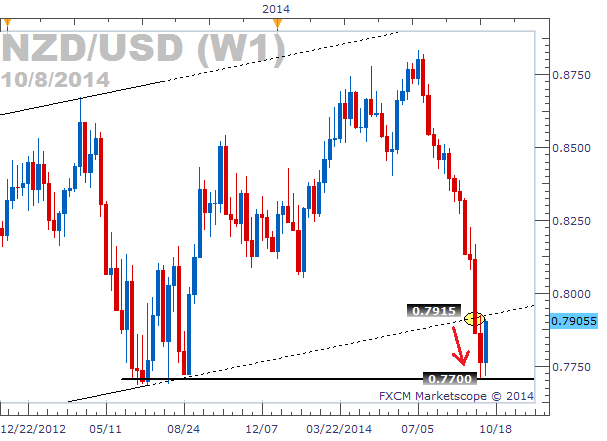 The Next NZD/USD Opportunity

Now that we know where price has been, it is time to look at the present. The Kiwi has recovered since its breakout lower and rests around 0.7920 (at the time this article was written). This is right at the previous support level that initiated the original breakout trade. As technical traders, we know that what once acted as support, can later act as resistance. So for this supporting trend line, it could resist price from breaking from below.

The method of placing a trade after a breakout recovers back to its original support/resistance level is something I explain in greater detail in my article titled, a Simple Way to Trade Trend Line Breakouts. It would be a good idea to check it out if this trade setup is not clear after reading the chart below.

Learn Forex: NZD/USD Selling Opportunity as it Hits Prior Support 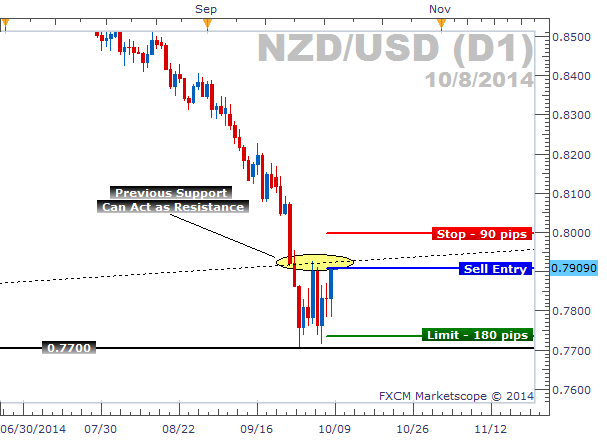 The exit strategy for this trade is based off of support and resistance as well. We would like our profit target to be within the nearest support level, which is what we identified earlier as the psychological 0.7700 level (and the prior swing lows). We can set our limit around 180 pips from our entry which will place it just above 0.7700, and our stop loss should be half this value at 90 pips. Using a 1:2 risk:reward ratio is a money management tactic I've taught hundreds of students and fits well with this trade setup.

Lastly, we cannot ignore the biggest reason why I like trading NZD/USD short right now, because it has a positive SSI. The Speculative Sentiment Index, in my experience, is the most powerful tool when trading currencies. By looking at what other retail traders are doing, we can look to do the opposite. For a full explanation of SSI, please read My Favorite Trading Tool, How to Use the SSI. It completely turned my trading career around. The chart below shows SSI alongside price which oftentimes have an inverse relationship with each other. It's this inverse relationship that explains why we often look to trade opposite of the retail trading crowd.

Learn Forex: Kiwi Sentiment is about +1.6, a Bearish Signal 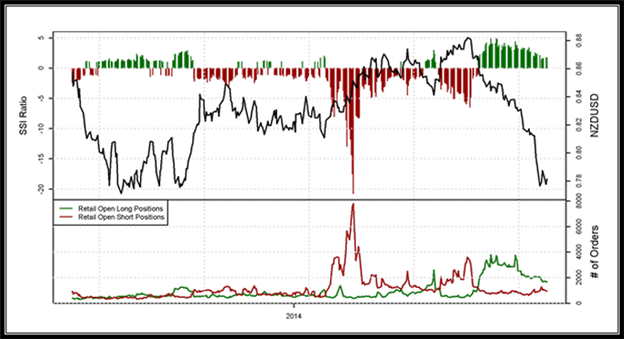 So in conclusion, if you missed out on the initial breakout on the NZD/USD, don't worry. The current trade setup we see today could yield another profitable trade. But as always, perform your own due diligence before placing any trades on your own account. Feel free to utilize a demo account to practice trading risk-free before trading with real money as well.

Start your Forex trading on the right foot with the Forex Fast-Track Webinar Series. This 4-part, live webinar course is the disciplined Traders’ Fast-Track to the Forex Market. Topics include:

This course is completely free, so sign up or watch on-demand today.