Where to Place Stops When Using Elliott Wave

"The Wave Principle is a simple rule-based methodology (3 rules) that allows the practitioner to dissect the collective ‘mindset’ of the market’s participants, which allows for defined, attractive/positive risk-reward trading/investing parameters--A game plan."

One thing you can almost always count on with Elliott Wave is that it is a controversial subject when brought up in a room of traders. One side argues that human nature and mental biases are much too abstract to move how Elliott Wave Theory says they often move. The other side argues that the beauty of Elliott Wave Theory is that within all the different news prints, sentiment indicators, and headlines, there is a limit to optimism and pessimism regardless of the environment and Elliott Wave is an effective frame work from which a trader can build an outlook to trade while managing risk.

See Also: How to Understand the Three Building Blocks for Trading Elliott Wave

Courtesy of DailyFX Plus On-Demand Course

In its simplest form, Elliott Wave is a trend trading timing tool. Elliott Wave is a trend trading tool in that it is built off of the concept that markets move in an uptrend with a set of higher lows and higher highs during times of optimism and conversely, markets can move with a set of lower highs and lower lows in times of pessimism. Elliott Wave is a time tool because it can help you identify common areas where a counter trend move is exhausted before the trend resumes. In the end, it’s a probability game so it’s critical that you trade with a favorable risk-reward ratio and that you are able to recognize common trend-correction patterns.

See Also: What Are the Traits of Successful Forex Traders?

How to Place Stops with Elliott Wave

Revisiting the prior argument, there are often intense views of Elliott Wave. However, if you keep an Elliott Wave count of the market to put the current move in context, you should have a point of invalidation or a price at which your view would be invalidated should the market trade there. That level of invalidation can and should act as your stop placement.

If you're still in a trade when your wave count is invalidated, you're like a fish out of water. 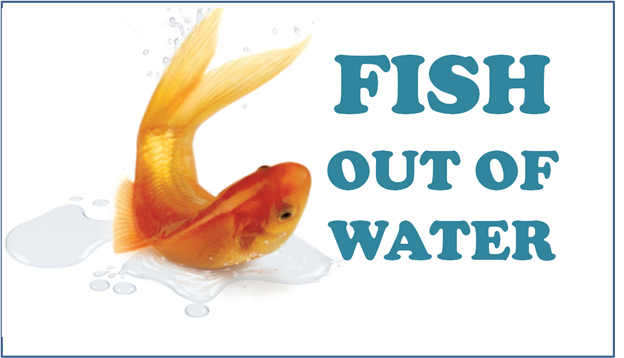 Taking this further, if you keep track of the 3 Cardinal Rules of Elliott Wave, you can use them to place a stop on the market your trading

As a trader, if you’re outlook is wrong as identified by the market breaking any of the above rules, then you’re a fish out of water and likely shouldn’t have your money at further risk because what you thought was, wasn’t in fact.

Following this schematic, if you believe you’re trading wave 3, the strongest and best trade to be in, then you should have your stop under what you perceive to be W.1. If you believe you’re in a W.5 and you’re looking to follow the trend and buy W.5 in the uptrend, you want to be sure you’re not still in W.4 or a different move that is reversing so you can put your stop at the end of W.1.

Of course, you want to be trading in the direction of the trend. In the end, if a level you identify as a reversal point is penetrated, then you should be out of the market. This can keep you objective and focused on only trading and staying in healthy trends.

This example of AUDUSD shows a 5-wave move higher followed by a potential, yet to be confirmed, 3-wave correction. If this holds, the 2014 low could still be the beginning of a new trend higher and when your conviction allows, you could buy AUDUSD with a stop below that level. Therefore, if you enter a trade because you believe a new trend is higher, you can use either the beginning of Wave 1 or the end of Wave 1 as a stop because when either of those levels give way, it is a sign that the trend integrity is weakening.

Now that you know a common pre-trend move, feel free to test your knowledge out on a free FXCM UKDemo account.

Claim your FREE universal membership to DailyFX Internet Courses & save yourself hours in figuring out what FOREX trading is all about.

You'll get this FREE 20 minute “New to FX” course presented by DailyFX Education. In the course, you will learn about the basics of a FOREX transaction, what leverage is, and how to determine an appropriate amount of leverage for your trading.