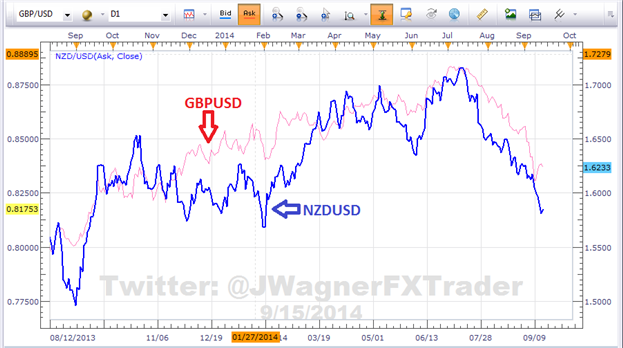 -A ‘Yes’ victory is not priced in, just increased volatility

-Sell GBP on a ‘Yes’ victory, sell the GBP against the EUR and NZD in a ‘No’ victory

There has been a lot of speculation and polling conducted to provide predictions about the result of this Thursday’s Scottish referendum vote. This article will lay out some strategies to trade through what is anticipated to be a highly volatile week.

First of all, when I view the charts of Sterling and its cross rates, I was surprised to see how steady it has been, even over the past couple of weeks.

For example, if you compare the GBPUSD versus the NZDUSD, you will find they have correlated well over the past several months.

Even though the ‘Yes’ votes have closed the gap in recent polling, the GBP hasn’t really sold off in a broad based rout. The sell-off has generally been contained against the USD.

To illustrate further, I calculated the difference in price now versus September 1, 2014. In early September, a ‘Yes’ vote wasn’t seriously considered as a probable outcome. It wasn’t until the next week did the ‘Yes’ polling begin to show a shot of winning the vote.

Anyway, using September 1, 2014 as the reference point, price action in the GBP exchange rates have varied widely with no clear cut trend. Nearly half of the currencies have outperformed against Sterling and against the NZD, JPY, and AUD, Sterling has actually outperformed!

My point is this, it may have seemed like a broad based round of GBP weakness, but the charts indicate otherwise. Therefore, let’s analyze the two outcomes for the vote.

I believe this is the biggest surprise that has not been priced into the GBP. There is a lot of uncertainty that comes with an associated YES victory. Therefore, we will likely see broad based GBP weakness. Since the FOMC would have met already on Wednesday and assuming that Fed Chairwoman Janet Yellen continues towards a sooner than expected rate hike, then the GBP/USD would be a good candidate to sell. Otherwise, I would look to the GBPAUD as a secondary option as a few of the AUD charts are showing bullish undertones.

(If you wish to place a broad based GBP trade (either to buy or sell), you can do so by placing a GBP basket trade through Mirror. Register here for a free Mirror practice account.)

This appears to be the more probable outcome. Therefore, I would not be surprised to see a GBP rally that could be broad based and temporary. We will use the rally as a means to sell Sterling, but we will sell a strategic cross pair.

One choice to sell would be the GBPNZD cross rate near the 2.03 – 2.05 zone. At this point, the GBP would be at its richest point relative to the value of the NZD since 2012. Therefore, the rally would be overdone and at risk of a pull back.

Secondarily, the EURGBP has an interesting technical set up. We wrote about the bullish bat pattern that would offer a buy point in the pair near .7870. This risk on this trade is clear as the pattern becomes invalid on trade through .7740.

Suggested Reading: EUR/GBP Looking to Emerge From the Bat Cave