Last week, I wrote an article about a significant reversal and breakout in the USDCHF. This was backed up by a flip in SSI that also supported a bullish position. Soon after the breakout however, the USDCHF began moving sideways. I believe this resistance is being caused by the 200 Day Moving average, which is popular indicator that all traders should be familiar with.

The 200-Day Simple Moving Average is one of the most popular indicators in the world. When price breaks through a 200 MA on a daily chart, it can often be seen as a topic of conversation on financial news stations, websites and newspapers. It is primarily used to give traders and investors an overall sense of how strong or weak a currency pair is.

The chart above shows the recent price action surrounding the 200 Day MA. We see a large run up in price breaking through multiple resistance levels until it met this powerful MA line. We have had 6 consecutive days where price has temporarily broke through the 200 Day MA or price has come within 10 pips of the line before retreating lower. So this level is acting as strong resistance.

If price were to remain below the MA, it could propel it lower back into the pair’s price channel. However, a breakout to the upside could add yet another reason to buy the USDCHF. Until we witness a larger price move, we are in a state of limbo.

Indecisive SSI for the USDCHF

Ever since the stalemate caused by the 200 Day Moving Average, sentiment has moved sideways as well. After the first flip in SSI in months, we have since seen 3 flips in the last week alone. This gives some insight on the uncertainty of where the USDCHF could be headed. This can be seen in the graph below where we track both price and SSI indecisiveness. 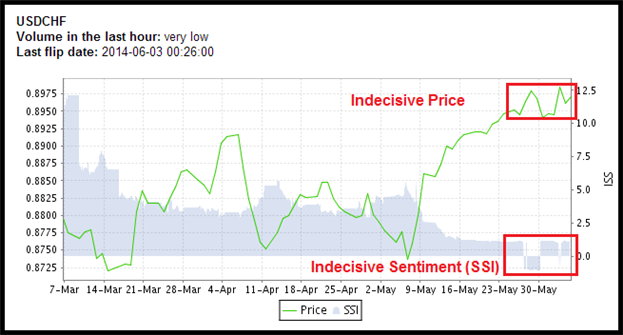 I am still partial to a long position on the USDCHF, but not as strongly as I was last week. Reducing existing trade size could be a smart money management move, or waiting for a confirmed break of the 200-Day Moving Average before buying.

The USDCHF is in limbo right now showing strength to the upside but held down by the 200-Day Moving average. As always, please apply your own analysis before trading or test trading ideas on a Demo Account until you personally feel comfortable risking hard-earned capital.