How to Trade the Gold Fibonacci Bounce

While US college basketball fans engaged in the tradition called “March Madness”, gold bulls were experiencing a little “March Madness” of their own watching the day after day decline in gold. In fact, after gold made a 7-month high of 1391.97 on March 17th, gold has lost 8% versus the US Dollar.

By stopping just short of the round number and psychologically important $1400/oz. area, gold fans ran for the hills as the shiny metal went into free-fall. However, gold appears to have found its footing at $1285/oz. This is also the 50% Fibonacci support area. Forex Fibonacci ratios are often used by traders to identify hidden levels of support and resistance ahead of time. In an uptrend, traders will look to enter at these levels of potential support. 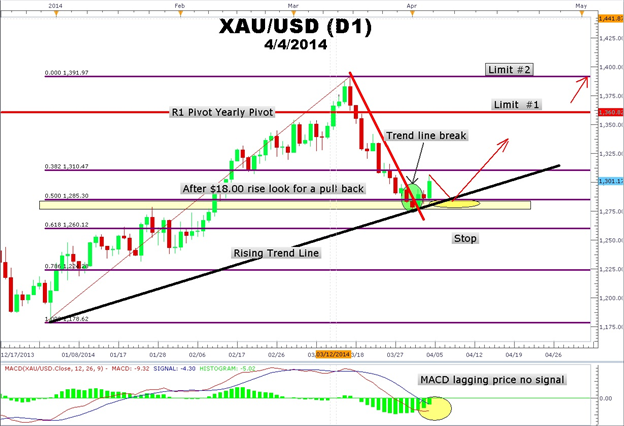 In the daily chart of gold above, notice the run up from the December 2013 lows near 1180 to the high on March 17, 2014. This $212 run was capped by a bearish outside-day candlestick pattern. The next day showed a price candlestick closing below the R1 yearly gold pivot level. Sellers “dog-piled” on gold and drove through the 38.2% retracement at 1310.47 with only a minor two-day pause before finding some respite at the 50.% Fibonacci level.

We have a three reasons why we would want to consider trading gold from the long side. First, gold has remained above the 50% Fibonacci support level for three days. Next, the sideways price action has broken through a downward supply trend line pictured in red. Finally, a bullish outside bar signals that buyers are ready to take price higher.

How to Trade this Setup

We can line up all the reasons to support a trade, but timing is still an important aspect to a trade. Too early and time is wasted, too late and money is wasted. Gold’s huge bullish move some $18.00 in one day may suffer some profit taking by the gold bulls. In addition, gold sellers who were beneficiaries of the decline may re-short at these better higher levels.

A limit could either be set at the yearly R1 pivot at 1360.82 or the previous high at 1391.97. Additionally, though lagging indicator, waiting for a MACD crossover could be that additional confirmation needed to give traders confidence in a gold bull move. The upward trending green histogram bars are something to take notice!

This article showed you how to use a Fibonacci to find a retracement level in gold. I want to invite you to enroll in our free Fibonacci Retracement Course to really grasp the Fibonacci trading concept on a deeper level. Sign our Guestbook to gain access to this course. You will automatically have universal access to other courses.