-The History of Point & Figure Charts

-Why Traders Use Point & Figure Charts

-The Construction of Point & Figure Charts

The Point & Figure or P&F charts are unique to every other chart you’ve likely used. This article will get you comfortable with the charting technique that is over 100 years old. Similar to Japanese Candlesticks, the Point & Figure charts have stood the test of time as they make recognizing congestion or trend breakouts easy.

The History of Point & Figure Charts

Unlike other charting methods, there is no one person credited for creating Point & Figure charts. Before computers, Point & Figures were adapted from a method used by floor traders in the 19th and pre-computer 20th century. The basic premise that caused P&F to be born is that there needed to be a simple method for floor traders to record price action to analyze price without unnecessary noise. Over a handful of years, two charts converged into one type of chart known as Point & Figure Charts.

Courtesy of the MTA

To make sense of the far-right chart above, it may be helpful to know what creates a new column which will be explained in detail later in the article. The chart on the right requires a reversal of 3 boxes of $1 each or $3 move against the prior trend to print a new column. As you can see, instead of price being printed, a column of X’s or O’s will occupy the chart.

The first method on the left was simply recording prices up and down without fractions which, you can imagine would become mind-numbing overtime. To make analysis less tedious and thus trading easier, a point chart above was constructed with price marked once on the y-axis and then marked an “X” or “point” for either direction when any whole figure was crosses. The Forex equivalent of this would be an Average True Range equivalent or 1XATR or 100 Pips.

How To Add Point & Figure to Marketscope 2.0

If you’re yet to utilize Point & Figure charts on FXCM’s Marketscope 2.0, you can easily do so. Please click on File -> Create View -> Point & Figure. 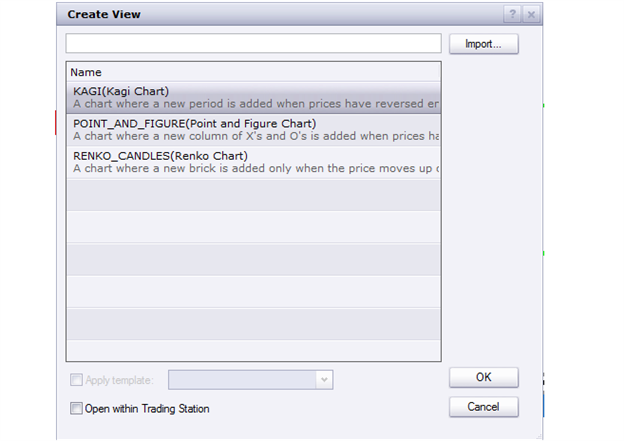 As you can imagine, a column moving higher or lower wasn’t easily recognizable and that was important for traders. Traders then combined these two methods to bring about Point & Figure charts, which you see on the right. Today, you’ll be learning how to use Point & Figures and why many find them helpful for discovering only the most important price action for the trend. The Point & Figure charts came about in the 1950s with “X”s up and “O”’s down and is what we use today.

Why Traders Use Point & Figure Charts

Learn Forex: It’s Hard to Argue that this trend is up 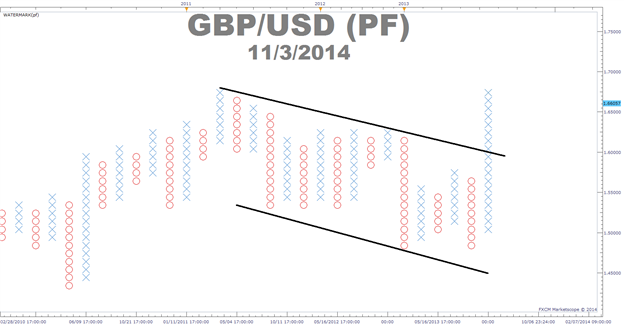 Some traders feel that Point & Figure charts are one of the great secrets of the trading world that deserve to be uncovered and utilized once again. You can come to your own conclusion after this four-part series to see if you should combine Point & Figure with your trading. One common thread among many traders who have found Point & Figure charts is that you’ll have an easier time seeing a strong trend that shouldn’t be fought until a reversal takes way first.

The Construction of Point & Figure Charts

There are 3 main components that will be needed to construct a Point & Figure charts. The components are:

Once these three components are determined, you will come up with a specific name for your Point & Figure chart like a 10X3 chart or 1ATRX3 chart for example. This name type comes from Box size X Reversal. Also, please note that higher prices will be marked by X’s and O’s for down-columns.

The reversal size will determine how sensitive your charts are. This will be determined by how many X’s or O’s the price must reverse before changing columns. The most common choices are 1-box reversals and 3-box reversals. A 3-box reversal chart will require 3x the amount of price action against the prior trend before reversing than a 1-box reversal.

Changing the box size effectively changes your time horizon and method of analysis. There are different trading signals for 1-box reversal charts vs. 3-box reversal charts. You can also make price projections with Point & Figure charts which will differ for each chart. This will be described in an upcoming article.

Learn Forex: Which High-Low-Open-Close Data Will You Use?

One last important note about not using the high or low is that you don’t know which manner they occurred. If a high produces a new X in a column of current X’s, the chart will post a new X for the new box size. If a reversal of an uptrend has happened according to your rules above, then you’ll look to the low of the day to plot the reversal. If there is no new high or reversal then you’ll ignore the day.

To answer the question, which is better? There is no clear answer however, most western methods of technical analysis like the simple moving average utilize the close price. You can choose which method you prefer but the Daily close data seems to incorporate the preference of majority of traders who utilize Point & Figure Charts for analysis purposes.

Today’s introduction to Point & Figure opens up an exciting avenue of analysis for your trading. It may be helpful for you to see Point & Figure as a new objective way of identifying price action but not necessarily a chart that you will enter trades on. The next article will divulge into how you can use 1-box & 3-box reversal charts together for a full view that many other traders are not considering to possibly bring you an edge.

To be added to Tyler’s e-mail distribution list,please click here

Claim your FREE universal membership to DailyFX Internet Courses& save yourself hours in figuring out what FOREX trading is all about.

You'll get this FREE 20 minute “New to FX” course presented byDailyFX Education. In the course, you will learn about the basics of a FOREX transaction, what leverage is, and how to determine an appropriate amount of leverage for your trading.