This fourth installment of the Forex majors yearly pivot series takes a look at AUDUSD, commonly known as the Aussie. Since trading above the 1.0600 handle area back in 2013, AUDUSD has surged some 1900 pips. This decline was not in a straight line as price made “pauses” along the way.

These pauses were great opportunities for traders to catch a “ride” on this southbound train! Forex yearly pivots helped to identify these areas of consolidation. Using Forex yearly pivots, traders had choice to enter new positions, take profits on existing positions, or pyramid profits with additional positions. 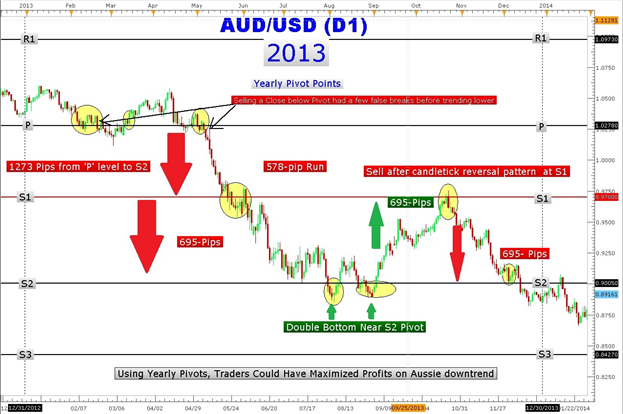 In the above chart, notice how the Aussie was in a choppy trading range for the first 4 months of the year. Notice how there were a few false breaks below the central pivot level indicated by line “P”. As price failed to make a new high, there was another big push to test the resolve of the central pivot. Finally, on May 6th a breakout below the March 4th low led to a 578 pip run down to the S1 pivot.

If Forex traders missed that move down, there was nine days of consolidation at the S1 pivot that allowed traders to pick up another 695 pips on a run down to the yearly S2 pivot at 0.9005. Traders may have been stopped out a couple of times trying to short below S2 as price snapped back up.

However, the resulting double bottom chart pattern led to a 695 pip ride back to the S1 pivot. A bearish engulfing Japanese candlestick pattern at S1 on October 23 capped the rally leading to the Aussie closing at the lows of the year just below the S2 pivot at 0.8865. 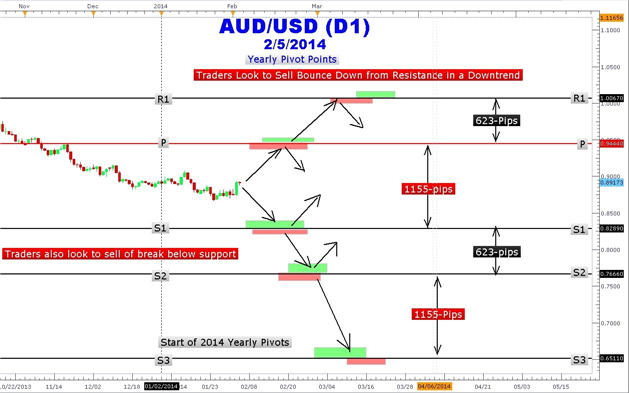 After a slow and choppy start in 2013, AUDUSD showed the direction it wanted to go; down. Once the first pivot was penetrated and cleared, AUDUSD took off in a fairly obvious direction punctuated by long, wide ranging red bars signaling that the bears were in full control. It paid to wait and stand aside for the “real” move. Fast-forward to 2014, and we can see Aussie heading to yearly highs near 0.9076.

A close above the yearly high opens up a move to the central pivot at 0.9444. If the Aussie bounces down from this resistance point, then a very good shorting opportunity has revealed itself and Forex yearly pivot traders would take special note of this level.

Remember, Aussie is prone to large retraces that look like reversals. If the pair is not trading above the October 23, 2013 high of 0.9756, then such moves higher should be treated as opportunities to short at better levels. It may take a little time and patience for price to hit yearly forex pivot levels, but the reward may be worth the wait!