Renko and Stochastics Team up for Winning Forex Trades

This is the third in a series of articles discussing Forex Renko Bars. We have gone over how to install and use this often neglected charting system. For years, Renko charts have lingered in the shadows of its cousins, the line chart, bar chart, and Japanese Candlestick chart. Even esoteric Heiken Ashi charts are better known.

But Renko is uniquely simplistic as it removes the dimension of time and volatility from the chart to allow traders to recognize the trend, make fewer trading mistakes, and stay with the trend longer. Renko also illustrates the ability of a currency to sustain consistent price moves. 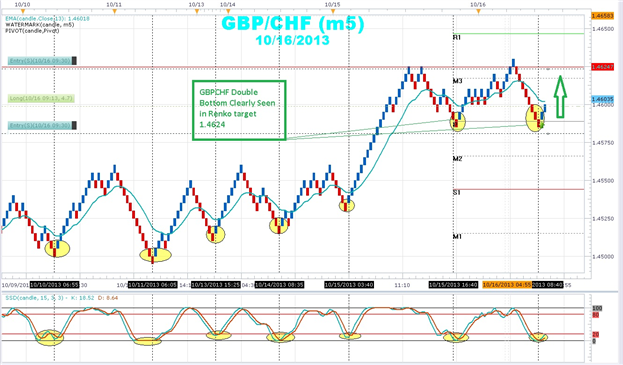 The addition of the stochastics indicator is like adding high definition stereo to an already top-of-the-line ultra high-definition television. You can trade Renko bars by themselves using the system of long after two bricks of the same color exit the trade when a brick of the opposite color appears. However, Stochastics gives an added visual confirmation that can give traders confidence in placing a trade.

Notice how slow stochastics with setting of 14, 3, 3 in the above example of the GBPCHF 5-pip step Renko chart pinpoints the exact turning points. A trader has three reasons to take a long trade; a rising uptrend, two consecutive blue bars, and stochastics crossing up from the ‘20’ horizontal reference line .The more reasons that traders can line up to support their decision to go long or short, the better the trade becomes. In addition, notice how the stochastic %K and %D lines flow smoothly from peak to valley without the erratic moves in between seen on other charts. This eliminates the guesswork and distractions allowing traders to focus on important decision making areas.

In addition, stochastics can be used with Renko to take profit on trades or to tighten stops. In an uptrend as stochastics moves above the ‘80’ horizontal reference line the indicator is in an overbought region. Traders must remember that stochastics can remain oversold for an extended amount of time and that it is not a reason to get short.

However, savvy traders may want to protect profits by moving stops just below the previous Renko “brick” or close part of the position once stochastics moves into the overbought region. The appearance of a red would be the clear signal to exit and look for the next trade.

Making a good thing better is how we can describe the addition of stochastics to Renko charts. Traders can derive the benefits of additional visual confirmation and signaling of turning points as well as money management cues. Stochastics and Forex Renko charts are a winning combination!