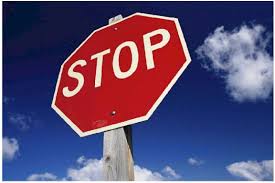 How To Place Smarter Stops

Article Summary: Placing a stop can be as delicate of a task as walking a tight rope. However, it’s important to focus on the subject of defined and methodical exits once you have a decent strategy so that you can protect your hard-earned trading capital. It’s been said good traders locate high probability entries while great traders identify exits. This article will break down exit methods.

If a trader doesn’t place stops nor has a grasp on position size, she or he won’t be a trader for long. Many seasoned traders have found stop placement to be a key point in there strategy that has taken their trading to a higher level. However, getting to this higher level is often a difficult journey that can involve being whipsawed by your trade hitting its exit point right before launching to your intended target.

While there are many challenges for trading correctly with stops, the subject is worth pursuing further so you can protect your well calculated entries. It’s important to note that there is no one-size-fits-all method when placing stops. A short term trader would be better served exiting on strength with a definitive time horizon where as a long term trader would do well to hold onto their trade until the trend has shifted.

Defining When to Exit Before

In 1957, Gerald Loeb wrote the iconic, Battle for Investment Survival, which makes the valid argument that increasing and protecting your trading capital is a “battle”. To fight this battle, Gerald recommends a 10% equity stop so that you’re account isn’t decimated from a bad decision. While we at DailyFX recommend a 5% stop, the point is the same in that you need to define an exit before you’re overly emotional with the trade because your money is at risk.

The most common methods for exiting a trade are as follows:

Hard Price Stops: This is a no-excuse price exit. If price pushes a

gainst your trade to this point, you exit the trade with no questions asked. There are different ways of determine the price exit such as the Average True Range but as you can imagine, there’s very little (if anything) preventing the market from hitting this level before moving on in the direction you perceived it would go that caused you to enter the trade in the first place.

Trailing Stop: Trailing stops come in multiple forms but their purpose is the same. Trailing stops allow the trader who has identified a good entry to cut their losses while letting their profits run in the direction of their profit target. The downfall of this method is that trend corrections can take you out of the trade before continuing to your original profit target.

Parabolic SAR: The Parabolic SAR (PSAR) is a great tool in that when the trend moves quickly in favor of your trade, the PSAR adjusts quickly to keep pace with rising prices. However, because PSAR adjusts so quickly to a big move, you can often be taken out at a normal correction. The biggest headache about this method is that if a market is a bit choppy before a big move, the PSAR will stop you out for a handful of small equity losses before you get into the big move. 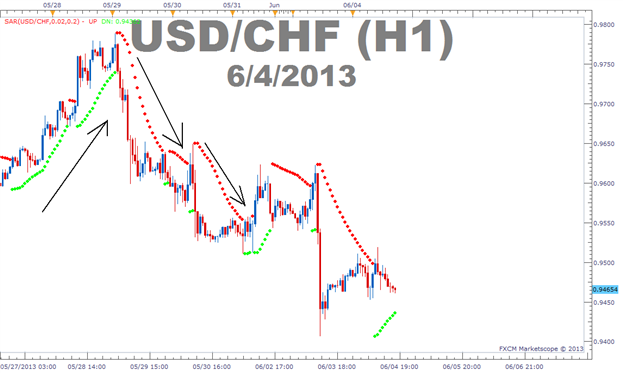 As you can see above, the red dots are recommended points to set a stop on a short trade. The arrows drawn manually show you where you would have been in the trade but then you see a few green dots below price which are quickly taken out by price and would have result in the dreaded “whipsaw”. Avoiding whipsaws is an art and something traders should focus a majority of their attention so you’re not exiting on normal price action.

There is no one way to avoid all whipsaws and therefore you should focus on trying to cut out most whipsaws which are often a result of stops placed too tight. Earlier, it was mentioned the short term traders should likely exit on strength whereas longer term traders may want to stay in a momentum trade longer to try and squeeze all they can from the move. Two preferred methods to avoid whips are to either place a stop exit below a pivot point or counter-trend support in an uptrend (opposite for downtrend) or through the use of Donchian Channels also known as the Turtle Trading Method. 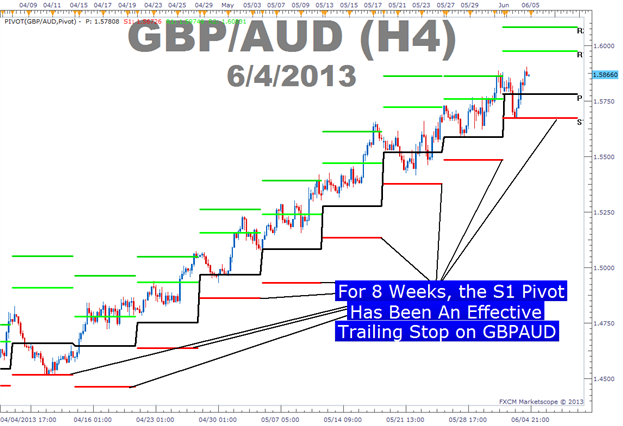 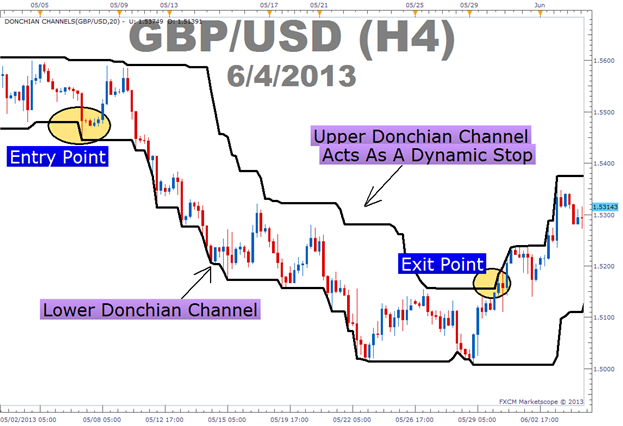 The purpose of identifying a reentry point after a stop-out is that you don’t want to miss out on a reloaded move back in the direction of the trend. Also, if you are on guard, then you can likely re-enter the move at a better price if a trailing stop has taken you out at a profit. Many traders will continue taking reentries until they hit a string of losses because the trend is in reversal mode.

Because trends never move in a straight line, once an entry has been identified the next logical key point is where you will exit. This article has examined many methods to help you manage risk amidst the volatility that this market is well known for. A reentry plan combined with smarter stops will benefit you in the long run so that the occasional whipsaws will be just that, occasional.

Would you like dozens of trade ideas every day with updated charts to identify major levels support and resistance on the currency pair you’re trading?