The Consumer Price Index, also known as CPI, is released on a monthly basis by most major economies to give a timely glimpse into inflation current growth and inflation levels. Inflation tracked through CPI looks specifically at purchasing power and the rise of prices of goods and services in an economy and can be used to influence a nation’s monetary policy. European CPI data is set to be released at the end of this trading week on Friday September 14th at 9:00 am GMT, as noted on this weeks economic calendar.

Below you will see a chart displaying the historic results of CPI (YoY) for the Euro Area. This month, expectations are set at 2.6% growth compared relatively to last year’s data. CPI as a whole has remained low despite the ECBs efforts to stimulate the economy. So what are the possible policy outcomes of this event?

Being one of the most watched economic events, CPI can heavily influence on the policies that central banks take. If CPI is released lower than expected, normally this would influence Reserve Banks to consider stimulating the economy by opting for lower interest rates or commit to new open market operations to increase the money supply. Conversely a higher reading would suggest that the ECB (European Central Bank) would be inclined to leave rates the same or potentially reconsider their current policy of monetary easing in the event of an extreme CPI reading. Depending on the outcome of the event, CPI and the policy changes that follow it have the ability to create a stark effect on the price of the EURUSD currency pair. Let’s look at the EURUSD daily chart below. 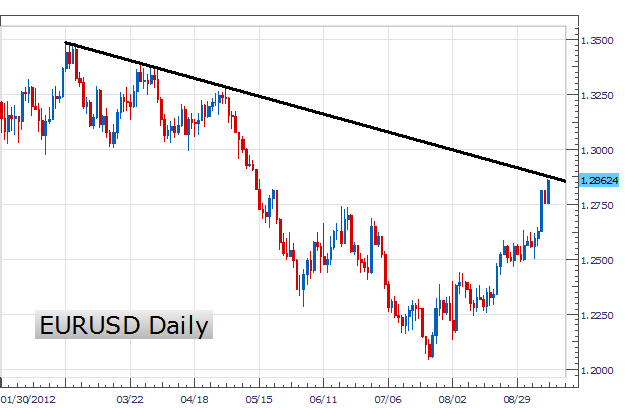 Looking at the EURUSD Daily graph above the EURUSD is currently residing at a key point of resistance. Overhead resistance is formed by connecting the February, March and May 2012 highs. If resistance breaks traders may trade a turn in the trend using a breakout strategy and entry orders. If resistance holds, traders can then begin to look for price to turn back with the prevailing trend. In this scenario traders may incorporate an oscillator, such as CCI, into their trading using overbought levels to signal potential entries.

New to the FX market? Save hours in figuring out what FOREX trading is all about.

Looking for a strategy to trade? Take our free CCI training course and learn new ways to trade with this versatile oscillator. Register HERE to start learning your next CCI strategy!