Tactics for Trade Management when Trading a Range

In this straightforward scenario when price trades at support the trader would take a long position with a stop just below the lowest wick in the range. The limit (take profit) would be set at the top of the range and the trader would let the trade play out. If all goes according to plan and price trades up to the limit, a profit of 40 pips would be gained. If price retraces and takes out the stop the trader would incur a loss of about 8-10 pips. 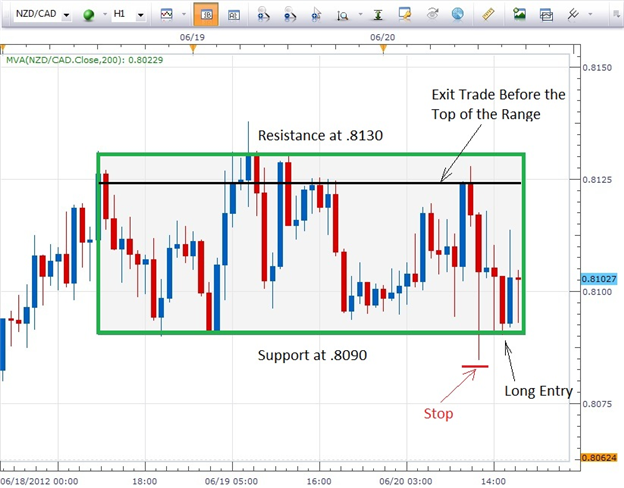 Here we have the same trade set up but we are going to increase the likelihood of taking profit by moving our limit down…a bit closer to our entry. Here’s why this can work. Notice that price has hit the very top of the range four times. (This would be each time a candle body or wick touched or pierced the .8130 level.) On the other hand, price has touched or pierced our new take profit level a total of 15 times!

By doing this we will give up some profit if the pair does trade to the top of the range. However, we are increasing our chances of having our limit hit and still achieving a solid profit.

The choice is yours… 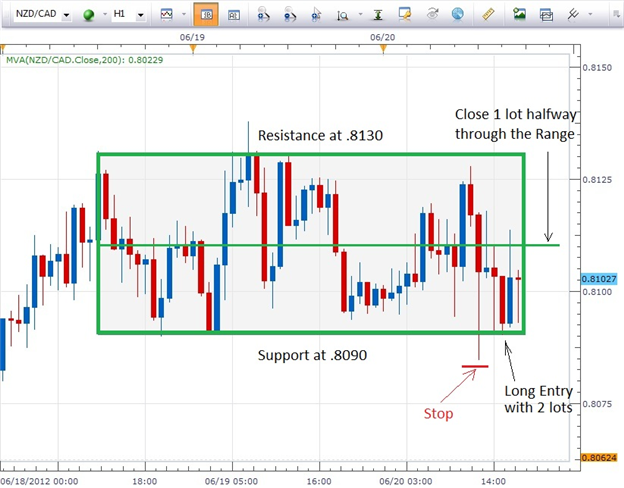 Personally, I like to trade multiple lots since it allows me more flexibility in my trade management. Keep in mind, however, that anytime we increase our position size, we also increase our risk.

For example, if our stop is set at 10 pips on the trade, with 1 lot we are risking 10 pips, with 2 lots we are risking 20 pips and so forth. To stay within our Money Management guidelines, be sure that the account size can handle the added risk.

When looking at the chart above, the set up remains the same but this time we would open our trade with two lots instead of one. (This strategy would be same whether we open two, six or ten lots.)

The flexibility that this allows is that we can close out one of the positions if the trade reaches a predetermined level of profitability.

In the example chart above a trader could close out one position when price reaches the halfway point in the range. By doing that the trader locks in the profit when that position is closed. Additionally, the stop at that point can be moved to breakeven, the price at which the trade was entered.

Now, if that second position retraces and hits our stop we are closed out of that position with no gain but a loss is not incurred either. We also have the 20 pips from the first position locked in.

Should price continue to move to the top of the range, the second position would be closed out thereby gaining the full amount of pips encompassed in the range. In the case of this example that would be 40 pips. Those pips would then be added to the profit gained when the first position was closed out at +20 pips for a net gain of 60 pips.