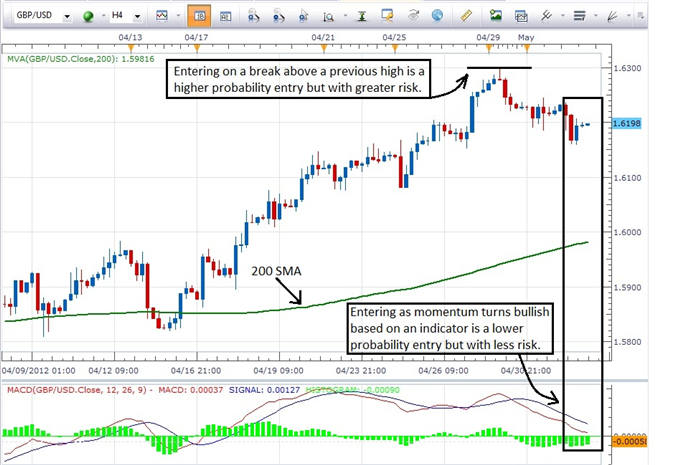 Buying the GBPUSD? Here are Two Ways to Do It

In our on-going quest to only take higher probability trades, one of our key rules (if not THE key rule) is that we only want to take trades in the direction of the trend on the Daily chart as they will have a greater likelihood of success.

We know we want to look for technical reasons to buy the GBPUSD for the following reasons: 1) price action is above the 200 period Simple Moving Average and pulling away from it; 2) price action has been making higher highs and higher lows, 3) at the time of this chart the GBP was strong and the USD was weak, and 4) on the Daily chart the pair is in an uptrend.

Now that we know the direction we want to trade the pair, there are two ways represented on this 4 hour GBPUSD chart below to enter the trade in the direction of the trend.

The question that now begs asking is which way is the best?

Either entry would be considered a technically valid entry. As far as which is the BEST one will depend on the perspective of the trader in question.

While a break above the previous high is a compelling technical reason to enter a long position, the placement of the stop (red line) below the previous low, can entail taking on a greater amount of risk.

On the other hand, when the red MACD line crosses above the blue signal line, it indicates that momentum has shifted to the upside on the pair. That can be an equally compelling technical reason to buy the pair. And, with the stop placed below the same previous low, we are taking on significantly less risk since our stop is closer to our entry.

So, in one instance (the break of resistance) we enter later with more risk but a greater probability for success. With the other, (the MACD bullish crossover) we enter earlier with less risk but with a lower probability of success.

In this case the trader is definitely presented with a classic “trade off” (no pun intended) scenario.

It is totally up to you…