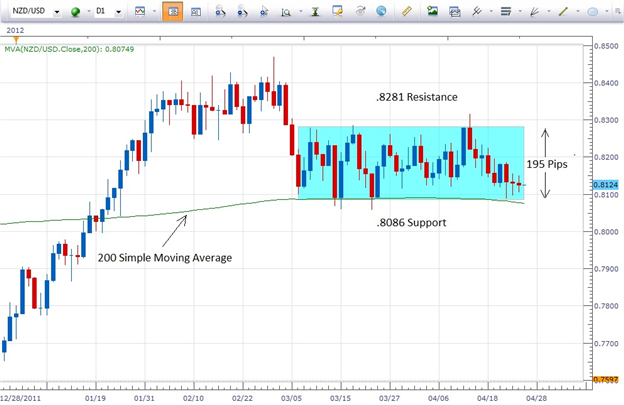 Oftentimes after a currency pair has been in a trend for a time, it will begin to consolidate or trade in a range. A trend trader can cease to trade the pair until it begins trending again or they can adjust their trading strategy so they can utilize what the market is giving them.

The NZDUSD currency pair is currently providing the trader with a consolidation zone.

The pair has been consolidating since about the first week of March. During the consolidation it has respected a support level of .8086 and a resistance level of .8281…a range of 195 pips.

To a trader who would be interested in trading the pair while it is in the range, they could buy the pair when it is trading very close to support and place a stop below the lowest wick outside the range. Should the pair continue its pattern of trading up from support, the trader could set a limit at or close to the top of the range to exit the trade profitably.

When the pair is trading very near the top of range at resistance, a trader could short the pair with a stop just above the highest wick outside the range. Should price action continue to trade down from resistance, the trader could set a limit at or close to the bottom of range to exit the trade profitably.

Since this consolidation zone is just barely above the 200 Period SMA, there is not really a strong trading bias either to the upside or the downside on this pair.

We must remember that a consolidation zone can end at any time. Price can “breakout” of that zone/range at any time. For that reason it is imperative that protective stops be in place on a trade at all times.

Speaking of breakouts, when that occurs, here is how a trader can handle it…

If price simply breaks above/below the zone, a very aggressive trader can choose to enter at that point. A break to the upside would mean that a trader would take a long (buy) position with a stop below the bottom of the range.

However, as can be seen on the chart, there are several points where price broke out of the range, both above and below it, and then moved back within the range before the Daily candle closed. In other words price “wicked” above/below the range. In each of these cases the aggressive trader who entered on those entry signals would either have been stopped out or had to endure strong movements against their position.