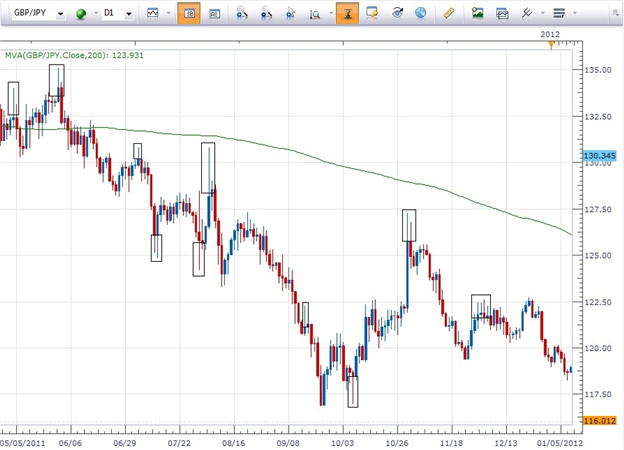 Many newer traders will tend to decide on where they will place their stop based on the amount of pips that they are comfortable losing. Maybe that number is 10, 50, 100, 200, or whatever. The point is that the number is arbitrary and, most likely, bears no relationship whatsoever to the price action that we see on a chart.

(Of course the placement of these stops must comply with the 5% rule of Money Management.)

To take this one step further and fine tune it even more, a better guide for stop placement is to bring long wicks, if they are present, into the analysis.

Note the rectangles that are highlighting some of the longer wicks on this chart. Also note that after a long wick makes an appearance, oftentimes price will move in the opposite direction of the long wick for a time.

These extended wicks, those that are longer relative to other wicks that are around them on the chart, have a story to tell.

A long wick at the bottom of the candle signifies that sellers were able to push the price down significantly…that is one aspect of what creates the long wick.

However, the seller’s numbers were not great enough to keep the price at that low level. The buyers were able to push price back up from that low level thereby showing strength. (That is the second aspect of what creates the long wick.)

Since the buyers triumphed in that sense, there exists the potential that their strength will carry forward and given that strength the price may rise.

(In the case of long wicks above the body of a candle, the opposite scenario would be true and price may fall.)

So how can a trader use this in their trading?

As always, we must first take note of the daily trend. If the trend is down, as it is on the chart above, seeing a candle (or several candles for that matter would even be better), with long wicks on the top, would point toward a stronger potential for price to move down… in the direction that the market has been taking the pair.

So, to continue with the downtrend example, if the pair retraces…that is, against the trend…and stalls at a level of resistance or a Fib level, I am going to be looking for long wicks at the tops of the candles forming along that resistance line for two reasons.

Bottom Line: Taking note of long wicks forming at levels of support or resistance, especially when they signal potential movement in the direction of the daily trend, can create a beneficial “edge” for the trader especially in regard to stop placement.