In this article we will focus on Range Trading.

At FXCM we have done quite a bit of research in the area of the profitability of our traders. We have found that traders who have experienced a greater amount success are those who trade during the Asian Trading session. Of the three major trading sessions (the other two being the London and New York), the Asian session from 8 PM – 4 AM Eastern Time is the least volatile. As a group, traders tend to do better trading during times when there is less volatility.

So what does all this have to do with Range Trading? Well, a trading strategy that does well during “quiet” times, times of low volatility is, you guessed it, Range Trading.

Since the markets tend to be less volatile during that time, levels of support and resistance are more likely to be respected by price as opposed to being broken through as they oftentimes are during more volatile trending markets. This creates a scenario where Range Trading strategies will have a higher probability of success.

What we learned next as a result of this profitability research was very interesting indeed. In addition to traders who traded the Asian Session having a greater likelihood of success, within that group, traders who traded currency pairs that did NOT have the AUD, NZD or JPY in them had an even higher rate of success.

For an in depth look at these findings, I would refer you to the article at this link… http://www.dailyfx.com/forex/education/trading_tips/daily_trading_lesson/2011/12/12/When_is_the_Best_Time_of_Day_to_Trade_Forex.html

Now, having the above background info under our belts, let’s take a look at a potential range trade that meets the above parameters. 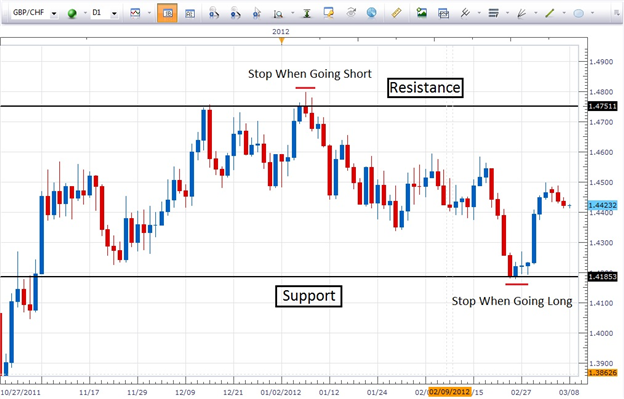 The above GBPCHF Daily chart represents a range set up that meets our parameters. Since this pair is trading in the middle of its range, we would wait until price action either trades up to resistance where we could short the pair or wait until it trades down to support where we could buy the pair.

When selling the pair our stop would be placed just above the highest wick which penetrated resistance…the red line. We would set our limit (take profit) on that trade at or just above the bottom of the range at support. The opposite would be true in buying the pair. Our stop would be placed at the red line just below support and our limit would be set at or just below resistance at the top of the range.

Let’s take a look at another pair that qualifies. In this instance we will look at a shorter term 1 hour chart of the CADCHF currency pair. 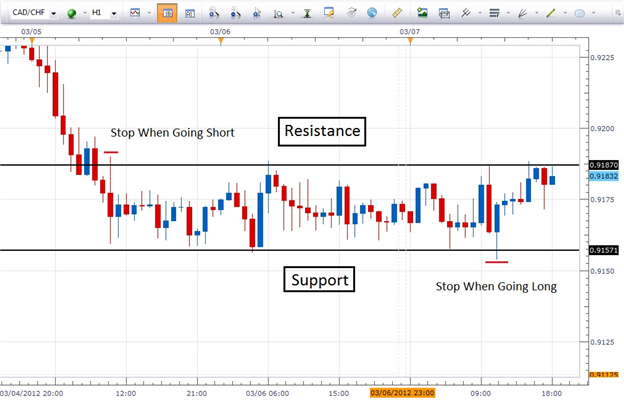 The same range trading rules that we covered above will apply on this pair.

The main differences on this pair are that price is currently trading very close to the top of the range. Noting that, a trader could choose to short the pair and place their stop as indicated by the red line above resistance. Also, we can see that the size of the range, the distance between support and resistance, is quite dramatic between the two examples.

The range in pips on the CADCHF is 30 pips while the range on the GBPCHF is 566 pips. This is to be expected since ranges tend to be wider on the longer time frames and narrower on the shorter time frames.