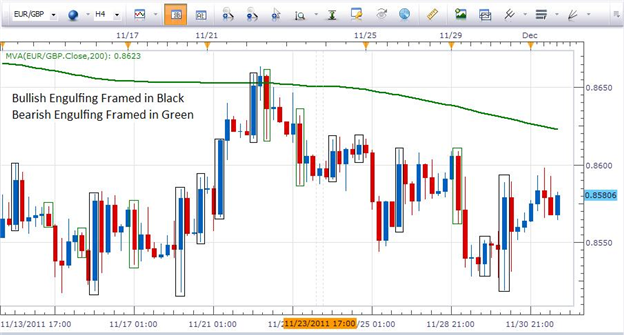 Using Engulfing Candlesticks in Your Trading

The question of how to identify and interpret an “engulfing” candle came up in our LIVE Trading Webinar the other day.

As far as rules for engulfing candles go, as long as the body of a candle "engulfs" the previous candle in terms of the body (some will say wicks as well) it would be considered an engulfing candle. As such, that can indicate that a move in the opposite direction of the candle that was “engulfed” may take place.

Just because a trader sees an engulfing candle does not mean that a move in the opposite direction is assured.

As far as being certain goes, a trader can be certain that a candle is an engulfing candle, but we can never be certain of what may transpire on the chart going forward.

Keep in mind, as is the case when interpreting candlesticks, a trader cannot make a decision regarding what a candle might be until that candle is closed. For example, the last candle on the right of the chart at this point looks like a bullish engulfing. However, when the 4 hour period closes and that candle closes along with it, based on price action between now and then, that candle may turn out not to engulf the previous candle at all. Always wait for a candle to close before making a trading decision based on it.

Lastly, take note of several engulfing candles on the chart where a move in the opposite direction did not take place after the engulfing candle closed…nothing is ever certain.