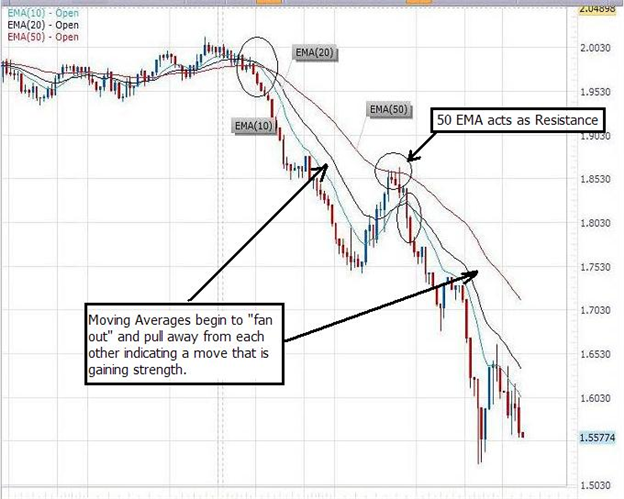 Entries Based on Moving Averages

Student’s Question:I used Moving Averages in this chart for a trade. Would this be correct?

Instructor’s Response:You demonstrate a good understanding of how to use Moving Averages in trading.

Moving Averages can be employed in trading in a variety of ways and you have chosen two of the more widely used applications. Two of the trades you circle on the chart are based on crossovers. The idea here is that as faster MAs crossover the slower MAs, at the point of the cross, a position can be taken in the direction of the cross. (Naturally trading in the direction of the trend, which you have done here, will offer higher probability trades.)

You are using the 10 EMA (Exponential Moving Average), 20 and 50 EMAs. The 10 EMA would be the “fastest” since it is based on a shorter time frame than the other two so it is more sensitive to changes in price and will move ahead of the other two.

Also, as the MAs cross one another and begin to fan out and move away from each other (as they do after each of the circled trades you have taken), that indicates a move that is gaining in momentum.

Another technique that you have employed here is using one of the MAs, the 50 in this case, as a resistance level. As price action has tested this resistance level over several candles and retreated each time, this was taken as an opportunity to short the pair again…good work.