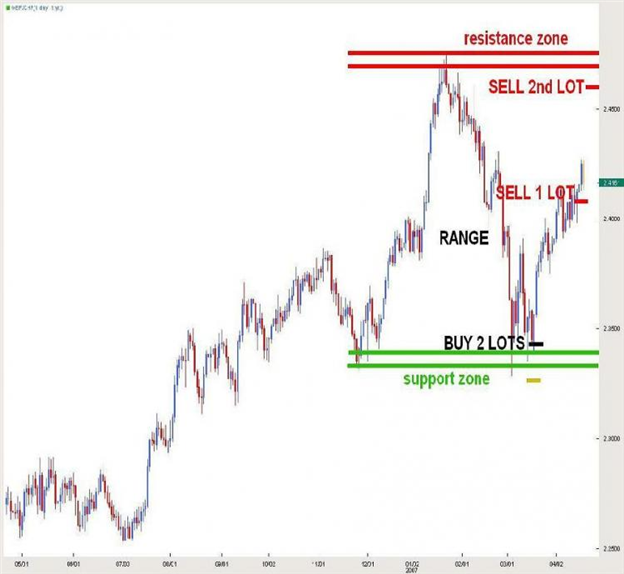 Student’s Question:In the Range Trading Webinar, a multiple lot strategy is mentioned where one lot can be closed to lock in profit while the other lot can be left open for the potential of a greater gain. Could you show how that would work with a chart?Appreciate it.Instructor’s Response:Good question…Take a look at the chart below…In a range we want to buy at support. So at the green support zone, we would buy two (multiple) lots and set our stop at the level of the yellow line…below the lowest wick that penetrated support.Then, at approximately half way through the range, we would close out (sell) one of the lots, thereby locking in that amount of profit and move the stop to breakeven on the remaining lot.We would then let the remaining second lot trade up to resistance (the top of the range) and close it out at that level or just before. That would be the ideal scenario. However, if the trade does not make to the top of the range and simply retraces all the way back down to support, we would be stopped out with a breakeven stop…in other words, no loss/no gain. But we would still have the profit from closing out the first position at the halfway point.This strategy allows a trader to lock in at least a moderate level of profit (assuming of course that the trade has moved in their favor to a certain degree) even if the trade does not make it all the way to the desired target level or limit.