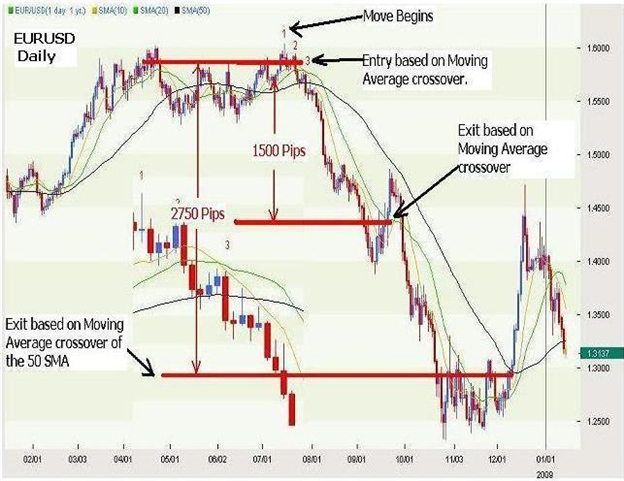 Entries and Exits Based on Moving Averages

Power Course Instructor’s Response:Your point is well-taken and anyone who has traded for a while can identify with it.All indicators are "lagging" by definition since, in some form or another, they are based on an average of price action that has previously occurred.In the case of Moving Averages, the faster moving average will provide more trading signals and give them earlier. That being said, they will be less valid than the longer Moving Averages since the longer ones are based on a greater number of data points. This is the primary reason that we recommend the use of longer term charts (at least one hour in length) since the signals provided will be more reliable than those generated from "minute" charts.Based on the chart posted, had the trade been taken at the #3 crossover, roughly 250 pips would have been left on the table from the very beginning of the move. However, had the trader stayed with that trade until the exit crossover of the 10 and 20 SMAs which occurred in late September, the gain would have been about 1500 pips. Had a trader stayed in the trade until the 50 SMA was crossed over to the upside in mid-December, the gain would have been about 2750 pips. These pip totals have netted out the pips left on the table at both the opening and closing of the trade.Trying to enter a trade right at the beginning of a move and exit right at the end, will be, as you say, frustrating. And, as can be seen on the chart, it is not necessary to be successful in the long run.