The MACD as a Lagging Indicator

The MACD is an indicator that uses exponential moving averages (EMA) to determine trend strength along with entry points based on crossovers.

Traders who use the MACD indicator often are critical of the fact that it will signal an entry after the initial move has begun and therefore leave pips behind. As such, many traders wanting to enter a trade sooner dismiss it as a “lagging” indicator.

A lagging indicator is a technical indicator that uses past price data to formulate the actions of the indicator itself. Therefore, all indicators are lagging since they are computed on trading data that has already taken place and then factored in with what is occurring.

In the case of the MACD indicator, the most widely used entry signal is when the MACD line crosses over the signal Line in the direction of the trend. Since these two lines are simply two moving averages, by their very nature the crossover will not occur until the move itself is under way. Some traders prefer this method of entry as it offers more confirmation that the move is more likely to continue in that direction however the MACD histogram can offer an earlier signal to enter.

MACD Histogram: What does the Histogram Represent?

For more aggressive traders who are not interested in the additional confirmation and are simply looking for an early entry, they may prefer this less widely used entry signal based on the MACD histogram bars. This is because the histogram bars have a faster setting (9) than either the MACD line or the signal line, resulting in a timelier trigger – see MACD crossover vs MACD histogram below.

The first point of analysis would be to pursue the MACD histogram as it moves away from the zero line (both positive or negative) - track it as its bars grow larger. The actual signal comes when the histogram no longer increases in height and produces a smaller bar. Once the histogram prints a smaller bar, traders look to enter in the direction of the histogram’s decline.

The buy signal on the left (blue) was created by five swelling red bars in a row followed by a fifth bar that closed smaller. Two bars later, the MACD line crosses above the signal line which is a traditional MACD signal. This later signal would have missed most of the move to the upside that the histogram signal would have caught.

The sell signal on the right (yellow) is a similar story. We saw fourteen bars growing consecutively until a contracted 15th bar was formed. This buy trade came several bars before the MACD/signal line cross. 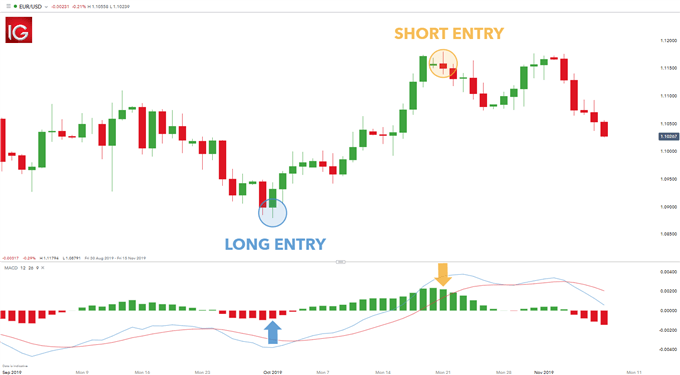 Recommended by Warren Venketas
Need confirmation to your MACD signal? Sentiment can help!
Get My Guide