There’s a strong correlation between interest rates and forex trading. Forex is ruled by many variables, but the interest rate of the currency is the fundamental factor that prevails above them all.

Forex traders must keep an eye on each country’s central bank interest rate and more importantly, when it is expected to change, to forecast moves in currencies.

This article will cover forex interest rates in depth, touching upon:

What are interest rates and why do they matter to forex traders?

Central banks have two main tasks: to manage inflation and promote stability for their country’s exchange rate. They do this by changing interest rates and managing the nation’s money supply. When inflation is ticking upwards, above the central bank’s target, they will increase the central bank rate (using the policy tools) which can restrict the economy and bring inflation back in check.

The economic cycle and interest rates

When economies are expanding (GDP Growth positive), consumers start to earn more. More earning leads to more spending, which leads to more money chasing fewer goods – triggering inflation. If inflation is left unchecked it can be disastrous, so the central bank attempts to keep inflation at its target level, which is 2% (for most central banks), by increasing interest rates. Increased interest rates make borrowing costlier and helps reduce spending and inflation.

How do interest rates affect currencies?

You (being the UK investor) are not alone in investing in the country with higher interest rates. Many other investors follow the increase in yield and so increase the demand for US Dollars which appreciates the currency. This is the essence of how interest rates affect currencies. Traders can attempt to forecast changes in expectations of the interest rate which can have a large effect on the currency. 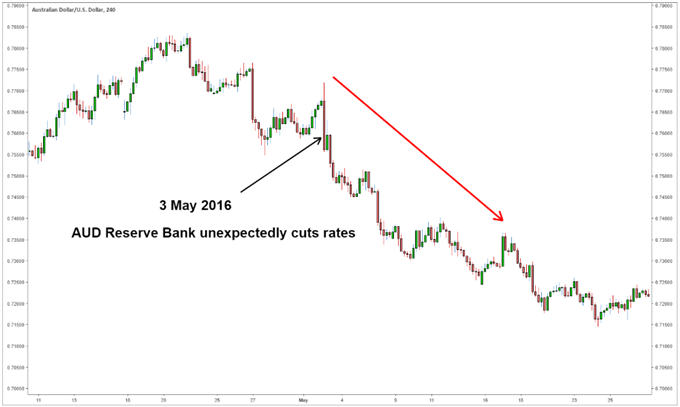 If a trader expects the US to unexpectedly hike interest rates he/she anticipates the US dollar may appreciate. To increase the trader’s chances of success, the trader can buy the US Dollar against a currency with low interest rates as the two currencies are diverging in the direction of their respective interest rates.

Interest rates and their differentials have a large influence on the appreciation/depreciation of the currency pair. The changes in interest rate differentials are correlated to the appreciation/depreciation of the currency pair. It is easier to understand visually. The chart below compares the AUD/USD currency pair (candlestick graph) and the difference between the two-year AUD government bonds and the two-year USD government bonds (orange graph). The relationship shows that as the AUD bonds yield decreases relative to the USD bonds, so does the currency. 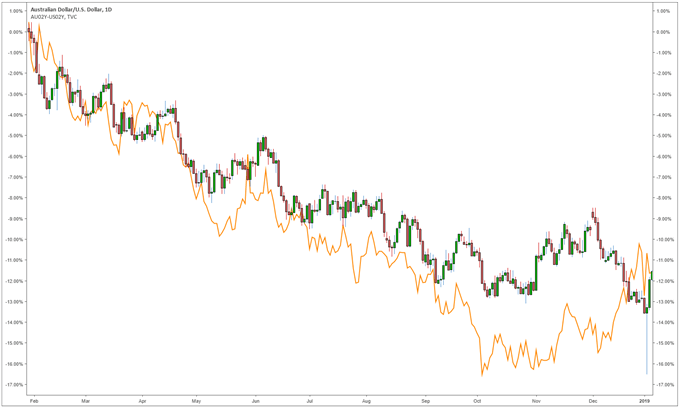 Fed funds futures are contracts traded on the Chicago Mercantile Exchange (CME) that represent the markets expectations of where the daily official federal funds rate will be when the contract expires. The market always has its own forecast of where the interest rate will be. A trader’s job is to forecast a change in those expectations.

The central bankers decide to increase or decrease interest rates based on several economic data points. You can keep up to date with the release of these data points using an economic calendar. Inflation, unemployment, and the exchange rate are some of the major data points. The trader must be in tune with the central bank policy makers and almost try to forecast what their actions will be before they state it to the public. This way the trader can reap the benefits of the markets change in expectations. This method of trading is based on the fundamentals which is different to trading using technical analysis. See our article on Technical vs Fundamental analysis to understand the different ways to analyze forex.

Forex traders can opt to trade the result of the interest rate news release, buying or selling the currency the moment the news releases. See our guide on trading the news for more expert information.

Advanced forex traders may attempt to forecast changes in central banker’s tones, which can shift market expectations. Traders will do this by monitoring key economic variables like inflation, and trade before central banker’s speeches. See our Central Bank WeeklyWebinar for expert commentary on the latest and upcoming central bank decisions.

Another method is to wait for a pullback on the currency pair after the interest rate result. If the central bank unexpectedly hiked rates, the currency should appreciate, a trader could wait for the currency to depreciate before executing a buy position- anticipating that the currency will continue to appreciate.

For more information on how to trade the forex markets see our article on forex candlesticks.