There are some basic rules which a trader can use to identify the best spots to place their stops and targets, and they should be used off your analysis, making them logical in nature. Risk/reward, as per usual, should always be at the heart of any trade.

Struggling with confidence, want to learn more about what characteristics successful traders exhibit? Here are two guides for you – “Building Confidence in Trading” & “Traits of a Successful Trader”

Use your analysis to determine stops & targets

The type of analysis or tools one uses to identify trade set-ups should also be used to determine when to exit, whether it is a losing trade (stop-loss) or a profitable trade (target). It doesn’t matter whether it’s simple support/resistance, trend-lines, slope analysis, Fibonacci levels, or any other form of analysis, the point is that you use it objectively.

Once you’ve identified a trade set-up and determined the point where the trade is likely to be proven wrong, you want to make sure you place the stop beyond that point. For example, if you enter into a long-trade at support, placing the stop below the support level significantly reduces the risk of becoming stopped out prematurely. For a short, you would place your stop above the level of resistance you’ve identified.

Setting stops prior to those levels significantly increases the odds you will get ‘picked off’. Many traders do this so they can avoid taking a larger loss. The simple solution here, is to reduce trading size to a level which allows you to place the stop in the proper place. Better to have a smaller winner, than a premature loser which eventually runs to your target. 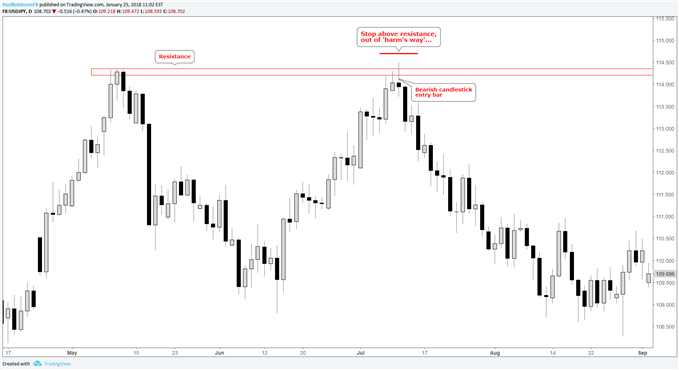 The chart above shows USD/JPY putting in a bearish key-reversal bar at resistance then turning lower. The logical spot to place the stop is sufficiently above the high of the candlestick. If price traded above then the reason for taking the trade is invalidated.

Just as your stops need to be logical, so should your target(s). You don’t want to impose your will, by saying, “this is how much I want to make on this trade” (hope), determine a fixed objective, i.e. – 50 or 100 pip objective.

By ‘looking to the left’ on the chart, that is to identify prior support or resistance, you can see where the market could potentially stop and reverse. This is a logical approach. For example, if you are long, then you want to identify where there is resistance and a possible point where you want to sell. In reverse, for shorts you would look for support where you may want to cover. 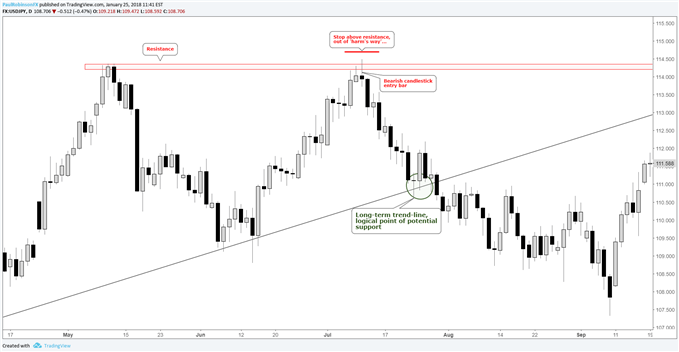 Using USD/JPY, again, as an example, there was a trade entry and stop identified, but where would the stop be? There is a long-term trend-line running higher, with little price support prior to it, making it a possible stopping point for a decline.

For price patterns (i.e. – Wedges, Head-and-Shoulders, etc.) using a measured move target can help you determine the size of a move to expect. It is based off the height of the pattern, then added or subtracted from the breakout point, depending on whether it is a long or short trade. But keep in mind, this is a projected target and it is still a good idea to use ‘logical’ levels.

For example, a bearish set-up might have a projected move of 300 pips, but major support is 200 pips away. In this case, major support takes precedence when determining the target. Stops should be placed well inside the pattern to avoid a shakeout. 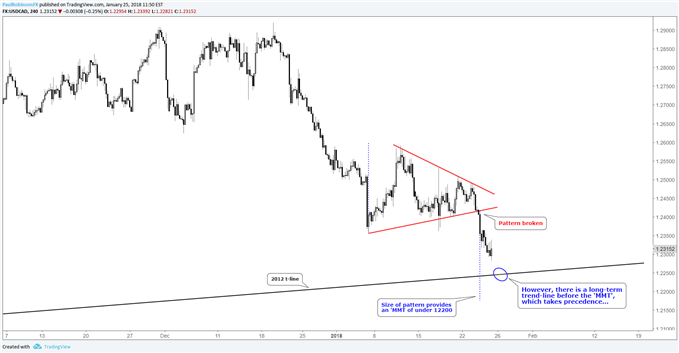 In the example above, we can see the measured move target (MMT) exceeds a long-term support line, in which case the technical level takes precedence over the projected target.

It’s also a good idea to exit ahead of key levels, as often times markets will reverse prior to reaching the precise price objective in mind. Buyers often times show up just before support, while sellers show up ahead of resistance.

Using trailing stops to extend a trade. When a market is showing considerable momentum as it moves beyond your initial target, you may want to use a trailing stop on a portion of your position. One approach, for longs, is to exit a position once it closes below the low of the most recent bullish candle.

For shorts, the trailing stop would be initiated on a close above the most recent bearish candle. Typically, if a trend is very strong you won’t see the prior directional bar taken out, and if it does, probability increases that a correction is underway. 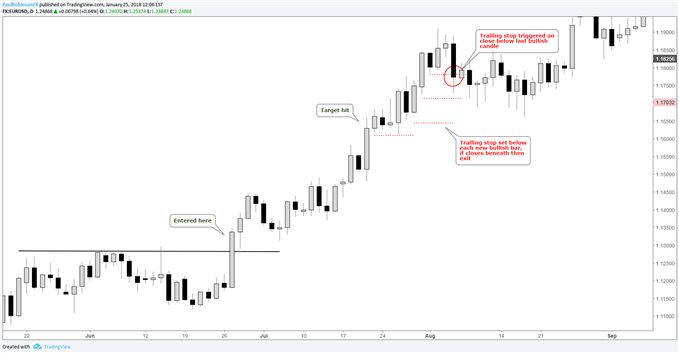 In this chart, let’s say you entered on a breakout, and your target was hit, but still thought it could continue to go higher. You could exit part of your position, or more aggressively, none at all, and then wait for a closing candlestick below the low of the prior bullish candlestick. In this example, once the trailing stop was triggered, the euro underwent a consolidation phase (correction).

Make sure you have good risk/reward

Risk/reward is at the heart of any sound trading approach. It’s easier to find quality set-ups with good risk/reward than it is to be right all the time. If good risk/reward ratios are used, you could be wrong more than right and still come out ahead. If you use a risk/reward ratio of ~1:2 or greater, you significantly enhance your probability of a positive overall outcome. 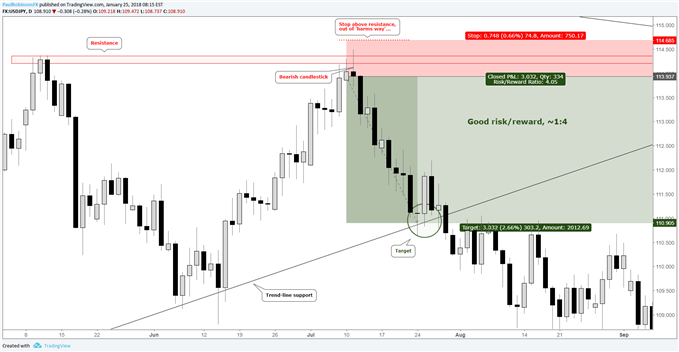 In the example above, we’ve included all aspects of the trade. The entry on the reversal bar, the stop sufficiently above it, a logical target, and the risk/reward potential for the trade. In this case, it’s a hefty 1:4 ratio, a quite favorable outcome for a winning trade.

For the full conversation and examples, please see the video above…