The down trend for AUD/USD from April 20 has been interrupted due to Friday’s non-Farm Payroll release. The bump higher is pushing AUDUSD into retracement zones which may offer some resistance.

Additionally, later on today at 12:30a EDT/2:30p AEST, the Reserve Bank of Australia (RBA) provides their latest report on monetary policy. They are expected to hold rates steady, but the news release could provide some temporary volatility. Therefore, we can use the Grid Sight Indicator (GSI) to help determine shifting momentum and potential signals in the noise after the news release. 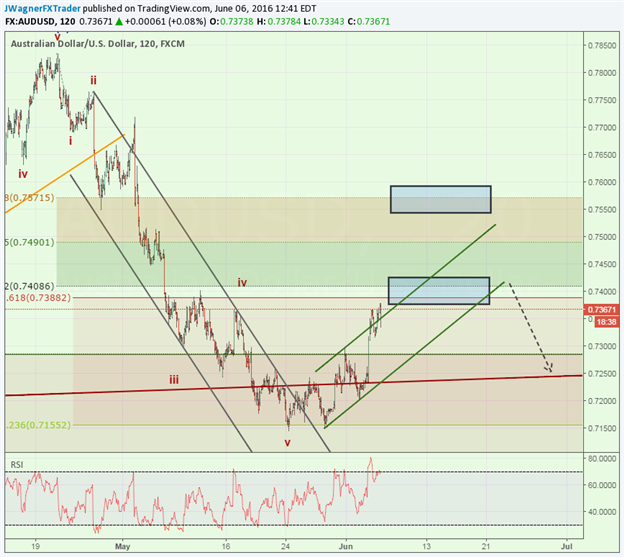 From a technical perspective, it appears the pair has sold off impulsively from an important turn on April 20. It is not uncommon for trends to be interrupted as it shakes out the weak holders of that trend. A couple of potential reversal zones we’re watching are 7385-7410 and the 61.8% retracement level at 7572.

To determine if a bearish reversal or a continuation is taking place in those price zones, consider:

Look at AUD/USD (or even AUD/JPY, EUR/AUD) through the Grid Sight website with the chart setting of ‘m3’ or ‘m5’. As price enters the potential reversal zone, see how GSI is reacting such that we want to the probabilities heavily shifted in one direction.

Note, GSI is NOT a news trading indicator. Therefore, wait at 15 minutes or so after the RBA announcement to begin seeing what the indicator is suggesting for momentum.

Depending on how GSI and SSI are behaving around the potential reversal zones can provide us clues of these resistance levels are going to hold or break.

Risk management is often overlooked but very important to trading. We have researched millions of live trades and found that traders who implemented this one technique were three times more likely to turn a profit versus those who did not implement the rule. Read about it on page 8 of the Traits of Successful Traders research.

For those that are unfamiliar, GridSight is a powerful big data indicator that can give you a look at the market by analyzing millions of historical prices in real time. By seeking out similar patterns, GSI helps you use that data to trade important levels coming up.