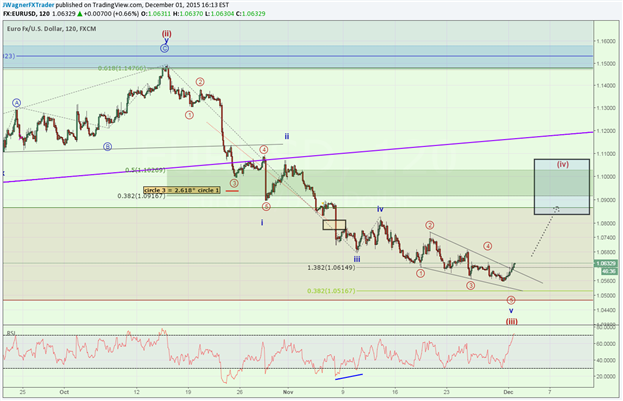 Buy or Sell: EUR/USD Stares Down A Big Week

-Bullish patterns suggest a minimal move back towards 1.08-1.09

For those who don’t closely watch the FX markets, this is a big week for the EUR/USD and a big month for the US Dollar Index. On Thursday, ECB President Mario Draghi will provide a statement regarding the ECB’s monetary policy. Economists are expecting a shift towards expansion of the QE program which could weigh heavily on the EUR.

Additionally, we have the US Non-Farm Payroll report coming out on Friday. One month ago, the NFP report was a surprise to the upside which fueled additional expectations for a Fed rate hike coming up December 16.

On the one hand, you have a central bank (ECB) which is leaning towards more easing. On the other hand, you have the Fed contemplating when to raise rates. FX traders love diverging monetary policies between two central banks as it can create strong trends. This is in large part why the EUR/USD has sold off aggressively for the past 5 weeks. However, these fundamental stories have yet to unfold and even if they do, is this the beginning of the trend or a buy the rumor then sell the news type of trade?

As we look through the technical patterns, it appears the higher probability move is for a couple hundred pips of US Dollar weakness. This could send the EUR/USD higher towards 1.08-1.09.

Using Elliott Wave Theory, we will cover a bullish pattern and bearish pattern with consideration to key levels to watch. Bear in mind, we are in a time of year where liquidity is thinner and news volatility can create riskier environments for traders. Consider market range orders that can limit the amount of slippage on trades.

Until November 18, 2015, the moves lower have appeared impulsive. However, the sustained move below 1.0615 has occurred in sloppy over lapping waves. As we pointed out in Monday’s US Opening Bell webinar, one pattern we keep an eye on in that situation is a diagonal pattern (image 1 above). Since the diagonal is appearing towards the end of a long move lower from August, we believe it is taking shape as an ending diagonal pattern. This pattern typically retraces to the origination which happens to be near 1.0830. A move above 1.1090 suggests the correction lower is complete with a likely retest towards 1.17 down the road.

A break below 1.0440 would leave the chart as labeled in Image 1 as incorrect. That is because on an immediate drop below 1.0440, wave iii would be the shortest of waves i, iii, v which is not allowed under Elliott’s rules.

Therefore, we shift the patterns towards being in the middle of a wave iii of (iii) lower. Since 1.0440 is the point of invalidation for longs, a stop and reverse order could be considered near there. 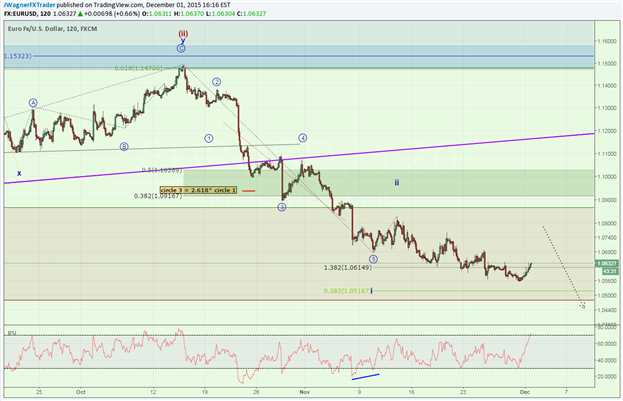 Of the two patterns above, the higher probability pattern is the bullish scenario of an ending diagonal that may have already completed. Not only is this an ending pattern in Elliott Wave Theory, but other conventional readings are suggesting this trend has matured and is ripe for a reversal higher. 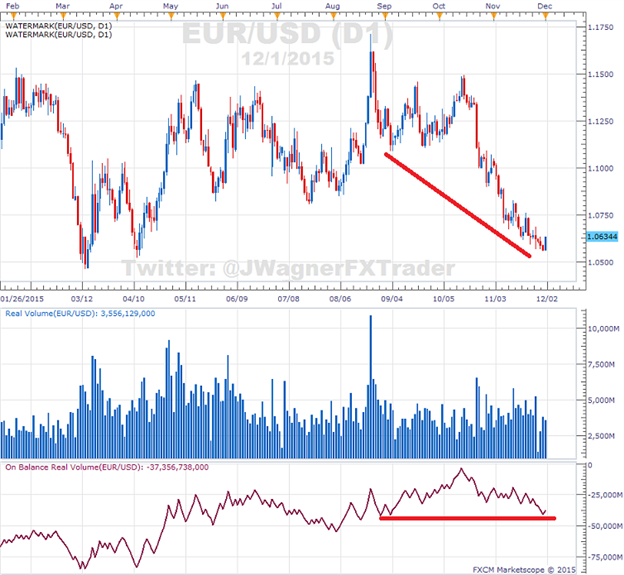 First of all, the On Balance Volume indicator has not been falling in line with the price drop. This creates a non-confirmation where price is falling and the indicator remains supported. Typically, we would like to see a sustained break in OBV and that hasn’t happened. We did just finished up a holiday week in the United States and volume is likely muted this week as well while we await the ECB announcement on Thursday and NFP on Friday. Despite those seasonality’s, this non-confirmation has been in place for 5 weeks. October 23 is when price broke below the early September lows yet OBV is still at the same levels it was in early September. 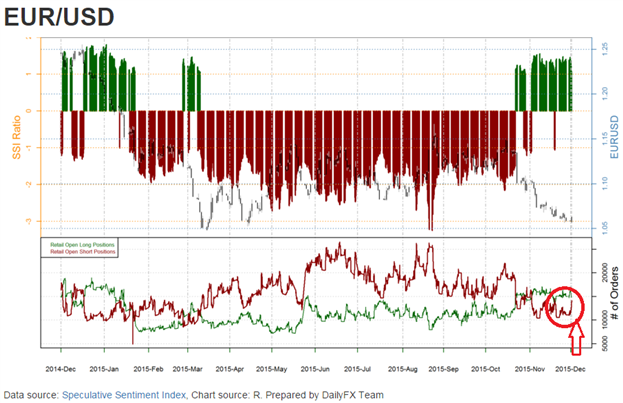 In looking at DailyFX’s Speculative Sentiment Index (SSI), we have seen the number of short traders grow while the number of long traders has held steady.

Notice on the chart above how the red line is drifting higher. As we write, EUR/USD SSI just flipped to negative -1.0001. This renewed interest in traders wanting to short EUR/USD is a bullish sign. Use our live SSI reading as a guide while the ECB news is released on Thursday and Friday. If the SSI reading moves lower and into negative territory, that would be a bullish sign. If the SSI reading moves higher, then that could lead to further losses in the EUR/USD.

Based on the patterns, OBV, and SSI, it appears the higher probability move is back to 1.08-1.09. If that move takes place, then keep an eye on 1.1090. A break above would signal a larger move higher. Otherwise, bears can consider sharpening their claws in the 1.08-1.10 zone. If the prices don’t reach 1.08, then a move below 1.0440 would signify deeper losses.

If you plan to trade the EUR/USD over the coming days, consider the impact of your trade size. Our research shows that when tweaking your effective leverage, the number of traders turning a profit increased from 29% to 40%. Page 10 of the Traits of Successful Traders Guide details it out [Free Registration].