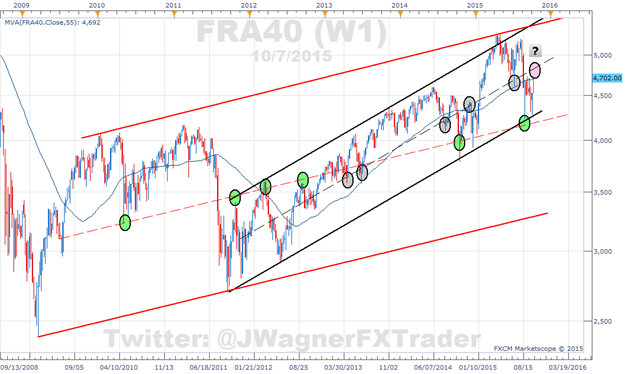 The technical picture for the CAC 40 has held nicely inside two different price channels for the past several years. We have a longer term channel formed from the March 2009 and September 2011 lows that fits well on top of the Jan 2010 and April 2015 highs (see red solid lines on chart).

Additionally, over the past 4 years, prices have been contained to a black upward sloping trend channel with a small throw over in April 2015.

Price channels are helpful technical tools because they frame the market for the trader. So long as price remains inside the channel, one can expect the trend to continue. When prices bounce outside of the channel (and they eventually will), then we can confirm a change in behavior for the traders of that market.

Since the French CAC40 bounced off the black channel support line on Sept 29 2015, prices have zoomed higher nearly 6%.

A natural question these channels present is how one can use them despite the wide variation in price from high to low? Said another way, the price difference from the bottom to the top of the channel could run 20%. What are the symptoms of a trend change BEFORE the diagnosis can be confirmed through a break of the channel?

A break of the mid-line.

On the chart above, the red dotted line corresponds as the longer term median line. We’ve circled in green those instances where prices bounced higher or were rejected by the mid-line. We can tell if the market thinks the channel and mid-line is important if we see several instances of the mid-line providing levels of support and resistance.

We have 6 instances on the red mid –line. Remember, the market is pausing at these levels BEFORE the trend channel could even be formed. So the market thinks they are important levels to watch.

Additionally, the black mid-line has acted like a wall 6 times as well. There is no magic number to the number of instances the mid-line will reject or support prices. However, we can use these lines to indicate near term sentiment.

For example, it appears prices are poised to retest the bottom side of the black mid-line near 4820 (pink circle). We would anticipate this touch to offer some resistance. If prices break above the black midline, then they’ll likely continue to the top of the channel near 5400.

On the other hand, a rejection at the black midline would likely cause a retest of the August/September 2015 lows near 4300. A break below those lows would push prices outside of the black channel and then pressure the red mid-line. So a break below 4300 would have very bearish implications.