From the 2014 low, EURUSD has moved over 1250 pips. If you remember, back in March when we were in the 104/105 range, parity (a term used for currencies at a quality or 1.00) seem to matter of time or a matter of when not if. Now, due to a variety of market forces the euro has strengthened beyond many people’s expectations and has been baffled many year in estimates of where this pair would end. Thankfully volume and sentiment have helped clear away some of the smoke of confusion, allowing us to combine price patterns to volume and sentiment in order to gather clarity.

As noted above, this was a big blow to those expecting a move to 1.00 by year end and many did not think it would take that long. Another form of resistance, in addition to the 200 day moving average, was price resistance around 1.1460/30. Since late February of this year, EURUSD was able to get near that level only to come crashing back down. However, we recently broke above that level as well showing resistance shattered across the board from a technical angle.

The New Carry Trade...And Its Unwind

One of the key powers of the strong directional trends in the FX market is the carry trade. In no uncertain terms, the carry trade is borne out of central bank policy and low interest rates so that investors can borrow cheaply in one currency in order to use their skills of identifying upside trades and using that borrowed money to invest. However, the ugly truth to the carry trade is that the unwind or reversal of the initial trade whereas the low yielding currency is aggressively bought back is sharp and ruthless.

As you can see above, in October 2014, the euro dollar took a decidedly negative turn as the DAX ran higher. This chart overlaid EURUSD to the DAX to show you a visualization of money being borrowed to invest. In fact, the inverse correlation of EURUSD and the DAX was it strongest reading over 30 days since 2003. As you walk to the right of the chart visually, you can note that as the DAX started to move lower and trades were closed out, EURUSD began to move higher. In other words, if you get a grasp on one of these markets, you likely have a pretty good handle on the other.

Markets are nothing if not erratic however, there are a few key things to look for in terms of volume, sentiment, and price patterns. First, if you look at volume, you can see we not only broke through resistance on Friday and Monday, 200 day moving average and price respectively, but did so on high volume. This type of move favors follow-through. Now, markets do not move in a straight line and pullbacks are expected but the current directional bias is higher. 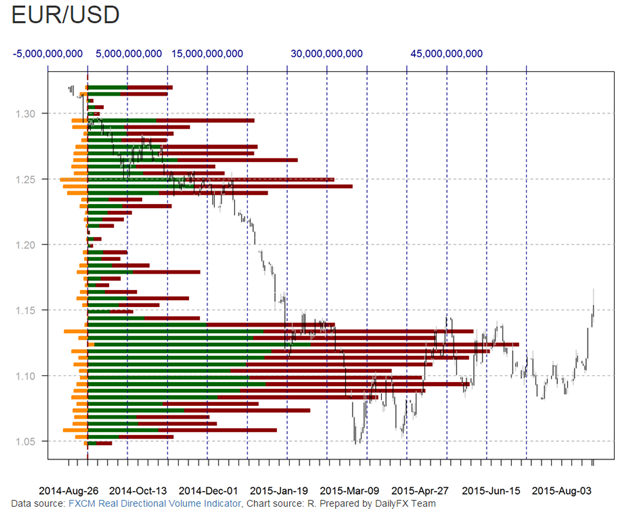 From a pure sentiment perspective, where we look for aggregate retail positioning as a contrarian indicator, EURUSD has been flashing by signals from the 1.0808 bounce. On the chart below, you can see the red bars showing retail open short positions largely outweigh retail open long positions, which favors further upside. 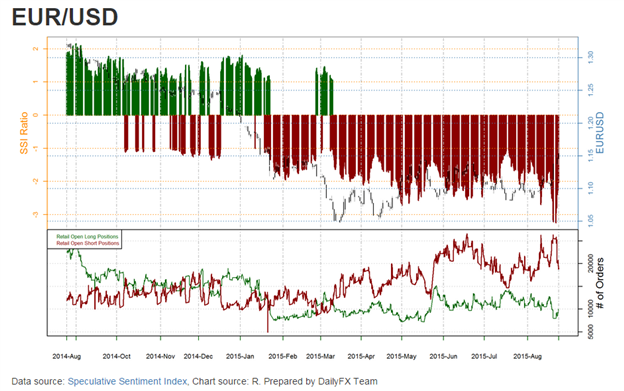 The 4hour EURUSD chart above shows a very clean range breakout or more specifically a potential double bottom price pattern. In my experience, some of the best trades are a reversal of another failed pattern that was a potential double top around 1.1460/30 on EURUSD. What was missing from the double top pattern though was the break down and close below the 1.08 18 level whereas we did just receive earlier this week a close above the 1.1430 double bottom neckline.

When trading a double bottom, the neckline is the point that validates the pattern however, the neckline can be broken on a retracement even if the pattern is still in play. A double bottom pattern extends the price range above the neckline for a target, which on EURUSD would provide a target of ~1.2050. Given that this Price pattern is validated by sentiment and volume, adds conviction but certainly doesn’t guarantee a profitable trade.

Alternative Scenario: there are no certainties in trading and a false breakout is always a possibility. If we get a break above 1.1560, along trade will be entered with a stop below the recent low and overall pattern invalidation on a close below 1.1214. A close below 1.1214 would favor the false breakout scenario and turn her attention back down to the March and April lows of 1.04/05.

What Volume & Sentiment Say about AUDJPY near 18-Month Lows

What to Learn From NZDUSD Posting Highest Volume Day in 2015