A New Way To Manage Risk When Trading FX

-Deciding When to Exit a Trade

-An Example of the Divided Stops

Trading any market combines two things very uncomfortable to any sentient being and that includes traders. First, acceptance of being wrong is hard for any person to do, which is a key to survive in trading because if you’re unable to admit that you’re trade idea is wrong and you’re best to exit the trade, you’re likely to hold on to a losing trade that could take you out of the game. Second, which is the different side of the same coin, is losing money which no matter if you speculate or not, losing money that you once had is difficult.

Deciding When to Exit a Trade

While losing money and admitting one is wrong is hard, it is the straight and narrow path that traders must travel should they survive the formidable years. Traders are then tasked at having a trading plan, which encompasses key decisions on every trade. These decisions include trade size, what to trade, when to enter and when to exit.

Learn Forex: Deciding To Exit a Bad Trade Is Key 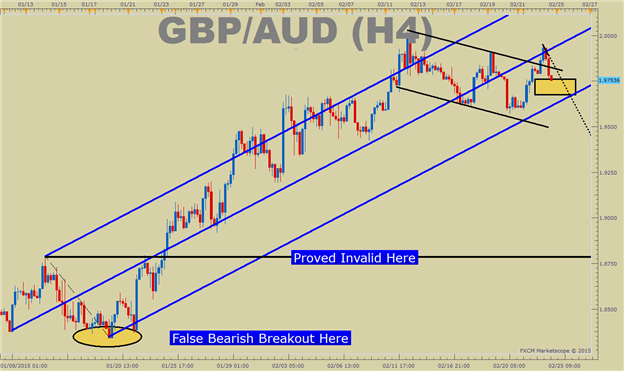 Of the chart above, you can see a “bear trade” trap which is only clear in hindsight. A temporary lower low, which may have been seen as a smart trade turned out to be a common correction or pre-trend pattern that was followed by a strong move in the direction of the prior trend. If you’re new to the market, it won’t be long until you find yourself seemingly entering at the worst price before the trend changes directions and if you’re experienced in the market, you know it’s a common occurrence and a reason to decide before you enter the trade at what point the risk has diminished the prospects of the reward.

Some traders may decide not to set a premeditated stop loss. Instead, they decide only after they exit the trade, where or when they will exit. The problem with this view, although some have successfully employed this approach, this risks being swayed by present loss to not cut the losers short but rather let them play out and potentially turn. As you can see on the chart above, the point of invalidity, shown as a lower high, was broken and resulted in a 1,250 pip move that would have wiped out many traders with any use of leverage. This is one example, but shows how predetermining an exit can be helpful as opposed to waiting for the market to “move back in your favor.”

A Different Methodology to Managing Risk

Risk must always be managed or put another way, losses must always be limited. One way to manage the risk that is difference from the traditional model taking yourself out of the trade once a clear level is breached is to reduce exposure if the market moves against you without breaking your “uncle point”. Of course, you can always reenter a trade but as traders, risk management is the number one job.

Reducing exposure, also known as harvesting losses, is a way to stay in a trade you believe will continue in the direction of your entry but that you’d like to lessen the risk on. Many traders don’t want to completely exit because nothing has fundamentally changed but the risk feels greater than when they entered or they want to free up margin to try out other trades. In this case, finding small levels of soft support in an uptrend that you’d unload a third or some small portion of your trade, can help you to scale out if the trade doesn’t work or simply free up capital for other enticing trends.

An Example of the Divided Stop Approach

Up front, it’s important to understand that this is not a strategy to encourage further risk. The max risk should remain a small percentage of your overall account, such as 5%. The advantage of this methodology allows a trader to be flexible in their exit while reducing the risk of exposure when the market moves against them. This has been called harvesting stops with the idea of planting stops on different parts of the set-up.

Here’s an example with USDJPY

The chart above shows a very popular trend that has since stalled that of USDJPY. The argument we’ve made is that a one-off stop where you’re entire position is exited may be exchanged in favor for a multi-staged exit so that you may remain in the trade, albeit with a smaller trade size, but with less exposure and the potential to catch the opportunity you first recognized.