Trading the Breakout after a Triangle Correction

-What Do Triangles Mean?

-When Do Triangle Corrections Occur?

-How to Trade the Following Breakout

Have you ever felt like the market has no idea what it wants or where it wants to go? This is often seen on the chart as a trendless sideways move with a lot of overlap and no clear direction. However, if you step back, you begin to recognize a pattern that can provide clues as to the next possible move with a favorable risk reward ratio.

What Do Triangles Mean?

Triangles are a trendless or corrective pattern that allows bulls and bears to find equilibrium after a strong trend. Triangles can happen after uptrend or downtrend and they often mean there is one more punch in the direction of the trend. Another benefit to recognizing and trading the breakout after the triangle is that triangles provide very clear profit targets.

Triangles can be easily identified by drawing trendlines off of converging highs and lows until a breakout occurs. If the trendlines are not converging, then it’s best not to trade it as a triangle. If you have trouble identifying the important highs, you can use a tool like fractals. Fractals will identify the highest high or lowest low over a 5-bar period as seen on the XAUUSD chart below. One thing to ensure is that what you label as the end of the triangle or ‘e’ wave cannot surpass beyond the ‘c’ wave extreme or something else is at play.

Triangles Are Easy to Spot, Knowing How to Trade Them Is What’s Important 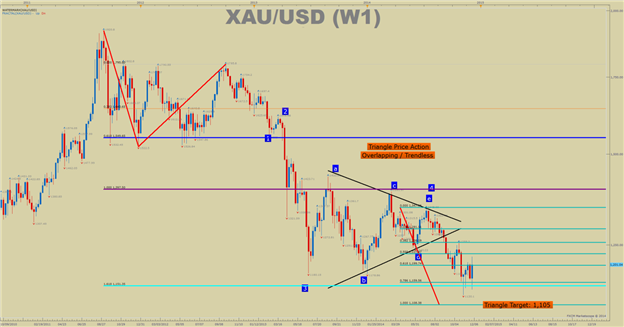 You’ll likely notice we’ll specifically discuss trading the breakout from the triangle as opposed to entering during the triangle hoping to catch the breakout because a lot of margin can be used up while waiting for a triangle to break and some triangles can take weeks, or months, or years to breakout.

Because of the drawn-out sideways price action, it’s best to label and identify key points of the triangle. For simplicity sake, let’s use Elliott Wave labeling which labels corrections with letters and triangles specifically with a-b-c-d-e for the key points.

Recommended Reading: How to Understand the Three Building Blocks for Trading Elliott Wave

USDMXN was a 5-year Triangle

When Do Triangle Corrections Occur?

How to Trade the Following Breakout

Once the overall trend has been identified as higher or lower and the trendlines have been drawn, we can look to where we can place protective stops and respective profit target ranges. Once a breakout has been identified, an entry in the direction of the overall trend can be entered with a stop set to be trailed below the final higher low of a triangle, or lower high in a bearish environment with a profit target determined by the width of the triangle or a prior trend measurement.

The width of the triangle is the orthodox target when trading triangle breakouts. However, another method is to look at the distance traveled earlier in the trend and look for an equal move. For example, EURUSD has just broken out of a triangle to print multi-year lows and we can use either the width of the triangle for a target or the distance traveled on the first leg of the downtrend that begin in May to June and use that as our target.

Big Picture EURUSD – Downtrend Since May

The profit target range for the EURUSD breakdown from the triangle is from 1.2260-1.2020 but that’s not a point to start buying because an extension could be underway. Either way, the triangle helps us see that the trend is reaffirmed and we should wait for key price action pivots to break against the overall trend before adjusting our biases.

Want to put this Article’s Theory to Practice?

If you’d like to practice taking little bets after identifying sentiment extremes, you can set-up a FREE FXCM Demo account here.