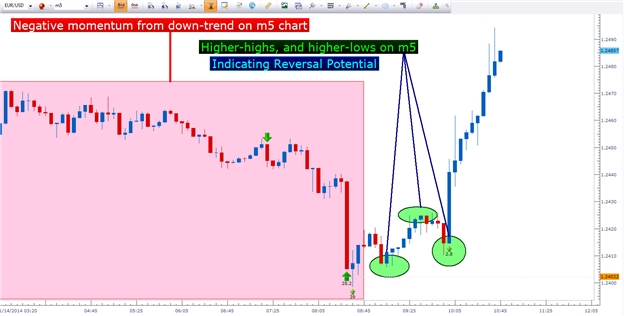 One of the most attractive aspects of trading with price action is the cleanliness that can be had from this form of analysis. With most technical indicators, which are inherently lagging, there’s going to be a element of disconnect to contend with that lag; periods where indicators simply ‘don’t work’ because history doesn’t always repeat itself.

This is why we can’t just trade with RSI and buy every time it crosses over 30 or sell whenever it crosses over 70 and expect to do very well. Indicators are simply mathematic formulas that show that something ‘may’ happen; aka an ‘indication.’

Price Action can offer the same benefit, providing an indication of what ‘may’ happen; but because we strip away the additional lag presented by most technical indicators the trader has the opportunity to look at entering in the early portion of the move without having to wait for the lag of an indicator to ‘catch up.’

As a note – the purpose of this article is not to dissuade you from using indicators. Indicators can certainly be used in a trading approach; but this ‘lagging’ nature needs to be recognized and planned around else the trader runs a massive risk of ‘chasing their own tails’ by trading on a lagging indicator based on another lagging quantity (price itself).

By trading with price action, traders are looking to the ‘least lagging’ indication of what may happen.

The candlestick wick is one way of looking to play on these themes. But before we talk about how to trade them, it’s important to understand what creates a wick within a candle.

Imagine for a moment that you’re watching the five-minute EURUSD chart, looking to trade in the direction of the trend. And all morning, the pair has been selling off, so you’re attempting to line up a short position. But like a light switch being turned on all-of-the-sudden, this negative momentum that you’ve been watching all morning on the five-minute chart stops and the pair begins rallying to the up-side. On this five-minute chart, higher-highs and higher-lows are made as EURUSD begins looking like it may put in a bigger picture reversal. The below chart illustrates this concept:

If you scroll to the hourly chart, you’ll see that same reversal setup, albeit with a significantly different format. By examining a longer time-frame, this reversal is then going to show up as a long or extended wick. We show the hourly chart of the same setup below: 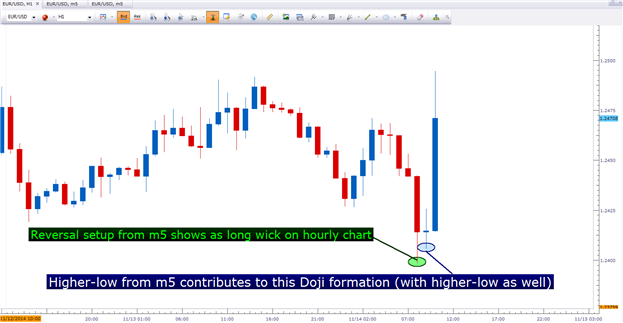 How to Work with Wicks

Now that we know what creates wicks, let’s look at how one might go about handling them; because not all wicks are created equally.

Wicks merely show us reversal potential. Reversals, in-and-of-themselves, can be dangerous beasts. By trading a reversal, we’re in-essence saying that ‘something is going to change.’

Rather, you want to use additional analytical components to help decide which wicks are attractive and which aren’t.

But before you ever trade on a long wick, you need to know how to manage the risk of such a situation. The entire allure of trading a reversal is the ability to look for an outsized move as ‘something changes.’ But if that something doesn’t change and if the reversal doesn’t hold, you don’t want to hold your trading account hostage to just one ‘bad’ idea that didn’t work out.

So stop placement is of utter importance, because if that reversal doesn’t work – you want to be out of the trade before matters get considerably uglier.

The beautiful part about trading a wick is that stop placement is pretty much built-in. The stop goes below the wick; so that if the reversal doesn’t hold you can cut the trade. But if the reversal does play out, you’re stop should, by logic, remain unfettered. That way, if you’re buying in a reversal setup but the market goes on to make ‘lower-lows’ and ‘lower-highs,’ pretty much the opposite of what you want to look for by being long, you can exit the trade before even ‘lower-lows’ and ‘lower-highs’ come into the market.

How to Pick the ‘Right’ Wicks

As mentioned previously, not all wicks are created equal. Some wicks can be great opportunities to get into positions while others simply aren’t going to work.

Proper risk management can help traders work with this situation to actively avoid The Number One Mistake that Forex Traders Make. As in, if the reversal doesn’t play out, the loss can be mitigated… but if the reversal does ‘work,’ the trader can look for a gain that’s, at least larger than the amount of risk taken on.

But which wicks should a trader look to trade and which should be ignored?

Traders should look for wicks offering reversal potential in the direction of the bigger-picture trend. We discussed this in the Three Price Action Rules to Build Around article, and alluded to this premise previously in our examination of EURUSD from the m5 chart up to the hourly time-frame.

Multiple Time Frame Analysis can help traders get multiple vantage points or views of the same market. A longer time frame can offer that bigger-picture that can enable trader to see which wicks are attractive and which they might want to ignore.

Traders can look for wicks to develop at or around these intervals in the effort of buying the higher-low in an up-trend, or selling the lower-high in a down trend. The stop is placed underneath the wick (for long positions – or above the wick for short positions), and the trader can then look for a profit target at least as large as the stop distance to actively avoid The Number One Mistake.

The chart below shows a reversal setup in EURJPY on the 30-minute chart. Notice how near-term resistance formed as indicated by the long line (and signified by long wicks highlighting sellers taking advantage of new higher-highs in EURJPY).

But just because resistance has been seen, it doesn’t mean that the up-trend is over… it may merely mean that there is a pause in the trend, and this can be a phenomenal situation for those looking to buy in the trend.

How to Play a Long Wick with Price Action Analysis 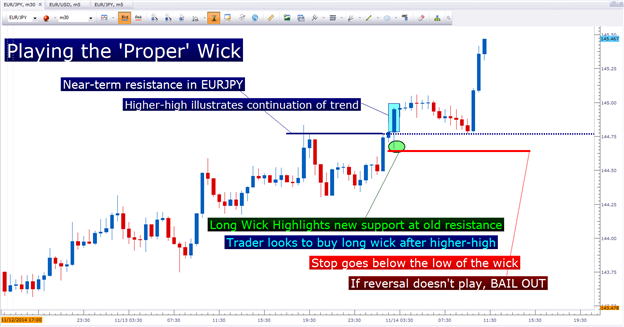 Price Action can be a fantastic addition to the trader’s arsenal in looking to accomplish this goal.

In our next article, we’ll get into more depth behind specific formations and price action setups that traders can look to utilize in their approaches.