What the Momentum Slow-Down Means for US Dollar Bulls

-Where Did We Come From?

-Where Are We Now?

-What’s Supportive and Contrary to the USD Bull Story?

A little over a year ago, the hottest trade in the world was the Japanese trade. This trade was made popular by multiple hedge fund managers who extolled the benefits of selling JPY and buying USDJPY or other JPY crosses like EURJPY & GBJPY. The excitement came and went but after May 2013 the JPY has had a series of ups and downs and while making for good trades, the fervor has slowed down from the 2013 glory and now the USD is on the main stage.

Main Point: The USD is taking a breather from its breathtaking run up from the July 1st lows. Since the beginning of the month, we’ve seen a correction that many people are convinced is only a correction and new highs will be seen soon. Today, you’ll receive a few key levels to watch on the charts as well as fundamental components that can help you see whether the Momentum will pick back up and new highs will be seen or a drop is forthcoming.

From Where Did We Come?

Let’s go back and start with last summer and run through a quick USD tour. In 2013, the Fed’s tapering of QE was expected widely and markets were buying the USD aggressively then Sept 18th happened. The taper that was, wasn’t as the Fed decided the time wasn’t right to begin tapering. This caused the USD to drop because the Fed was not confident enough in the global economy to begin the taper and ended up engaging in the taper in Dec. 2013 with an expected date to end in Oct. 2014. In July, traders lined up in the understanding that the end of QE was coming as the taper wined down and the logical next step would be rate hikes, which traders like because rate hikes suggest strength and yield.

Where Are We Now?

Now Oct. 2014 has come and on Thursday, October 16th, the following line came out from a Bloomberg Interview with non-voter but common hawk, James Bullard:

This statement definitely caught markets off-guard and suggested that the Fed that was hesitant to start the taper is equally hesitant albeit in less respects to end it. Why, you may ask? The global economy is putting up a lot of red flags. Europe, China and other large economies are showing a sharp decline in economic indicators and if you’re familiar with Intermarket analysis’ concept that every market is related then you can understand why the Fed is cautious, which begs the question if another downturn is upon us, what happens to the USD and will the Fed end QE3 only to engage QE4 or will they leave the rest of global economy behind and start hiking rates months after the scheduled end of QE3? Either way, the path that lay before them could be as difficult if not more so than the one that lay behind them which could leave the US Dollar in an indeterminate state until further direction is found. 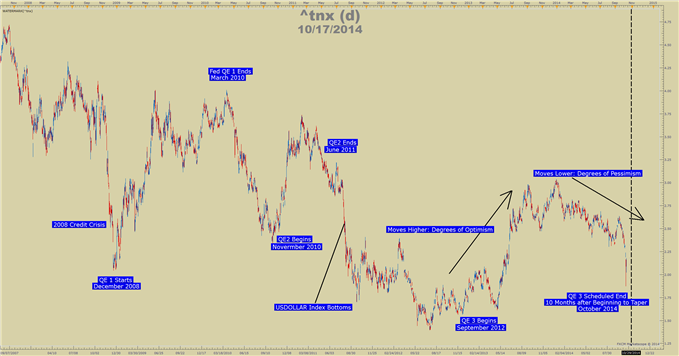 Many FX traders understand the importance of US Treasuries to the FX market and one reason is that it is a great barometer of market confidence. The chart above is the yield the 10-yr pays, which is inverse its price so that a higher price of 10yrs creates a lower yield. Yields pushing progressively lower to the bottom right of the chart suggest people are running into US Treasuries at an increasing clip because they are uncertain that the global economy can pick up in the coming years regardless of the fact that the price, inverse from yield above, is trading near-all-time highs.

Recommended Reading: How & Why Treasuries Matter to FX Traders

What’s Supportive and Contrary to the USD Bull Story?

So today, we’re at the starting line again albeit a different one. The Federal reserve has the option open to leave the world of QE that began in December 2008 behind them and take the path toward normalization of rates and guidance. This outcome would favor further upside for the USD and the US Dollar’s great run that started July 1st, 2014 could have much more upside similar to late 1997 when a multi-year breakout was just getting under way. The major next steps may sound too extreme but framing them this way will allow you to see macro themes and potential trades.

Bull Story that would induce Higher-Highs and many traders would look for the low hanging fruit of buying USD vs. economies like the Eurozone with an increasingly dire outlook. The bullish outlook for the USD could be played against any other Central Banks that are gloomier than they have been and are looking to weaken the currency in order to support their economy. We’ve heard the likes of this from banks like the Reserve Bank of Australia & New Zealand, which could continue to see their currency fall against the USD if the Fed takes the hawkish actions of ending QE and rate hikes.

If you’re comfortable with volatility and you still want to buy USD even with rate hike expectations dropping but don’t like the JPY, you can play USDMXN which just hit 2014 highs.

Lean how to manage your trade so the trade doesn’t manage you. You can register for our FREE online course here.

While the stage could be set for a further rally, you need to be careful of air coming out of the balloon that has lifted up the USD since July. That air coming out could be the expectation of a rate hike dissipating and there is credible evidence of that happening. For example, the US 2yr Treasury yields point to a disbelief in any rate hike now until 2016 as it traded as low as 0.2416% on October 15th, 2014.

The chart above shows a trend filtered momentum indicator called Ichimoku. Traders can use Ichimoku as a guide through the volatility that is likely to follow in the USD. Looking at the chart above, if the US Dollar index breaks down below the monthly low and the bright green line known as the lagging line follows, you will likely have a renewed selling interest. Whether this would be a longer term decline or shorter-term multi-week decline would depend on the economic backdrop.

If this breakdown on the chart happens and risk sentiment continues to drop as seen by drops in oil and or stocks, then USDJPY sell may be a clean play as JPY often strengthens in times of global economic weakness.

If the USD breaks down and multi-year trends continue, and there’s no-guarantee that it will, another potential risk-on play would be AUDUSD or NZDUSD that could bounce nicely on a risk-on move.

Either way, it’s key that you keep an eye on inflation numbers across the world’s largest economies and keep an eye out for Central Banks’ plans and outlook over the next few years.