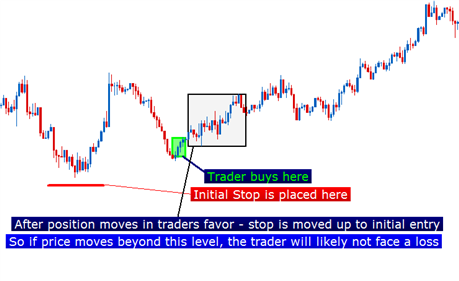 If you were to ask ten new traders what it would take to become a professional, or even just profitable; you’d likely get at least 9 responses dealing with the entry or strategy for entering the market.

After all, it’s only logical to imagine that if one were to find profitability, they’d need a system or a way of buying before prices move up or selling ahead of a decline.

It’s only after countless hours and numerous trades will one often realize that the key to profitability entails much more than just finding good setups. The future is uncertain, and most systems or strategies will have a period of bad performance. This is just the nature of the beast.

Equally if not more important are the concepts of risk and trade management. We discuss risk management at length in DailyFX PLUS webinars, Educational articles, and in our 360° Program.

In this article, we’re going to discuss trade management.

The Importance of a Plan

Another topic that we discuss at length in DailyFX are Trading Plans and the importance of having one. While the idea of being able to just follow ‘gut instinct’ and reactions can be attractive, we have to take a realistic look at matters of trade management.

Human beings can’t tell the future; and being in a trade or a position doesn’t make that any more likely. So, rather than placing a trade and just ‘hoping’ for the best, traders should take a plan-of-attack into each setup.

The Beauty of the Break-Even Stop

We can’t help it: As human beings, we are wired to try to win; it’s in our DNA. This is why most new traders will, at some point, suffer from The Number One Mistake that Forex Traders Make – because they try to do whatever they can to win on each and every position. As traders, we’re constantly facing this conundrum of ‘greed and fear.’

This desire to turn each and every trade into a win is not a good thing. This means that traders (especially new ones) will let losers ride for way too long while shutting down winners way too quickly. Some trades just need to be closed before a short-term idea becomes a long-term problem. We discuss this premise in the article, How to Lose Properly.

One defensive method that traders have to off-set this behavior is the break-even stop.

The break-even stop is the act of the trader adjusting their stop-loss order to the entry price on the position after the trade has moved in their favor. Doing this means that, even if the position turns around and evaporates the profit in the trade; the trader is taken out at their entry price.

Taken from The Break-Even Stop; prepared by James Stanley

This is designed to help offset that ‘fear’ that traders will often feel while in a winning position. Many traders close out winners too quickly when these are usually the situations where you want to try to be greedy.

The break-even stop allows a trader to rest comfortable with the idea that, worst case scenario; they still have protection on the trade.

To Scale, or Not to Scale

At the forefront of the trade management discussion is the topic of scaling. There are two ways to scale a trading position.

You can scale into a position by incrementally adding to the lot.

Or you can scale out of a position by incrementally removing pieces of the lot as the trade works further. But before considering to do either, keep in mind what we mentioned about the importance of a plan. We’ll discuss scaling out in our next article, Trade Management 102.

‘Scaling in’ can be dangerous… It be an excuse for traders to add to a losing position. This can be disastrous; because if the position is showing you a loss already that means your initial analysis was incorrect. And if that move continues, adding to this losing position can only exacerbate the cost of being incorrect.

Rather, scaling in can be a strategic way to enter the market with a concentration on risk. We discuss this topic at-length in the article How to Scale In to Positions.

Let’s say, for instance, that a trader wanted to buy GBPUSD with a 200-pip profit target. The trader can simply place the entire lot on the entry of the trade; or they can impose a ‘scale-in’ approach in an effort to take less risk on the entry.

So, rather than putting on the entire position at the outset of the trade, they can put on 1/4 of the lot; and then wait to see if the setup will work. After the setup gains a pre-determined amount (this could be 10 pips, 50 pips, or 100 pips), they can add in the next ¼of the lot. And after another positive movement in the trader’s direction, they can look to add in the third quarter of a lot, and then later the fourth. 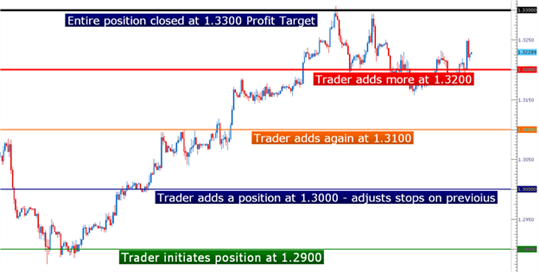 Taken from How to Scale In to Positions; prepared by James Stanley

The benefit behind this is that if the initial setup doesn’t work out as the trader had anticipated, they only take a loss on the 25% of the position. They don’t add the second until they have a decent idea that the initial analysis has proved beneficial.

Additionally as the position moves in the trader’s favor as they’re scaling in, they can look to move the stop from the previous scale to break-even; thereby further limiting risk of the entry. As the trade continues to develop while the trader is adding pieces to the lot, stops can be adjusted further in-the-money to protect more and more of the unrealized profit in the position.

In our next article, we’re going to examine a much more exciting prospect: Taking profits by scaling out of positions; one of the only ways that traders can balance the greed of looking for a larger profit with the prudence of taking some risk off of the table.