How to Trade in Stretched Markets

So the past week has brought in a maelstrom of volatility. For many traders, this is a very, very good thing. Volatility to a trader is like opportunity. Low volatility environments means range-bound markets offering limited upside, combined with choppy or direction-less trends that can confound swing traders and position-builders alike.

As proof – take a look at most of the popular hedge funds and how they’ve performed over the past 18 months. It hasn’t been pretty.

But as summer has begun to fade into fall, volatility has found its way back in the market thanks to ECB-action, middling economic performance out of Japan, and improving data out of the United States; leading many to believe that interest rate hikes might not be too far off in the future.

These facts have helped to provide some nice moves for traders to work with… but it can present a challenge moving forward. With markets stretched, it can be difficult to find a comfortable entry – and further – with the potential for volatility that’s been seen thus far, traders have to account for the potential for that volatility to continue or perhaps even increase.

In this article, we’re going to look at a market that is beginning to look quite stretched and how traders might be able to approach it in an effort of taking a risk-conscious strategy into the environment.

This is the theme that I’m personally most excited about right now; and the reason is the fundamental implications driving the move combined with what these types of themes have shown us previously.

In 2012, Shinzo Abe offered hope to the people of Japan after a two-decade deflationary spiral had engulfed the economy. This was marked by an extremely strong yen that made it extremely difficult for Japanese companies to remain competitive.

How might a strong currency destroy an economy? We covered that in the article, The Nucleus of the Forex Market; in which we showed how a strong yen made it more difficult for Japanese exporters to do business overseas. For an export-based economy, this can wreak disastrous consequences; as evidenced by the value of the Nikkei from its peak in the late 80’s going into the 2000’s.

The Nikkei Crash (as evidence of Japanese economic weakness)

Taken from The Nucleus of the Forex Market

In the summer of 2012, hope was rather dismal for the economy of Japan. The economic pressures of the previous 20 years had turned political, and turmoil had reared its ugly head with Japan’s top ranks. The country went through six different prime ministers from 2006 to 2012, and the future looked rather bleak.

Hope sprang from the campaign of Mr. Shinzo Abe; a man who had previously held the post of PM but had resigned in shame amidst scandal(s) in his cabinet. Mr. Abe based his campaign around economic initiatives designed to end and reverse the two-decade deflationary cycle.

Mr. Abe proposed three different ways to turn around the Japanese economy that became known as the ‘three arrows’ approach in an effort to address monetary, fiscal, and structural issues within Japan. The three arrows were/are fiscal stimulus, monetary easing, and structural reform.

The first two arrows were launched in Abe’s first few weeks on the job; but traders didn’t wait for Abe to take office to begin pricing these moves into USDJPY. The fiscal stimulus and monetary easing were very similar to the QE program embarked upon by the United States; and just like the US flavor of QE, these policies saw considerable weakness come into the currency.

The third arrow of structural reform is considerably more difficult; and this has been somewhat of a struggle thus far. So much of a struggle that Japan’s economy, and further their markets have yet to illustrate signs of recovery.

The most recent GDP print out of Japan was a 7.1% annualized contraction; and traders have begun to look for another round of QE out of Japan. Japanese economists including Mr. Kuroda at the head of the BOJ have begun alluding to the benefits of Yen weakness… this has created price movements showing anticipation of future intervention.

Will there be another round of intervention in Japan? Nobody knows, including those at the BOJ. We’re in a ‘wait-and-see’ mode.

But one thing is clear, and that is the trend in USDJPY. This market has moved higher so quickly that the chart is now appearing stretched; and trading in these environments can be even more daunting than a low-volatility type of environment.

How to Trade in a Stretched Market

The first thing we have to realize is that the market is stretched for a reason… and until prices move back to their previous range, we have to imagine that those reasons may continue to exist, and further – that these moves may continue in that direction.

But just as with any other environment we don’t want to blindly seek out reward without at the very least investigating the risk or cost of a position. We looked at this topic in How to Manage Risk with Price Action.

Traders have two ways of trading in a stretched market, and the way that they should look to is based on how aggressively they want to treat the trade.

Necessary for trading in a stretched market is risk management and the ability to get out of the position if it becomes clear that the trend will not continue.

The aggressive trader has a fear of missing out. This fear can be dangerous because it can be costly. But if a market is really hot, and if a move is going to continue – this aggressive mannerism of entering a position can allow for entries while the more conservative manner might not.

The aggressive way of entering a market is moving down to a shorter time frame to find a recent swing low. Traders can then place their stop under that swing low so that if this move doesn’t continue at the brisk pace the trader is looking for – the position can be closed before a bigger reversal may come into the market.

The chart below shows the setup in USDJPY on the hourly chart, along with recent swing lows that can potentially be used for stop placement. Notice that there is an aggressive and conservative support level offered, so traders can approach USDJPY in an aggressive manner with either conservative, moderately aggressive, or aggressive risk management.

Trading a Stretched Market in USDJPY 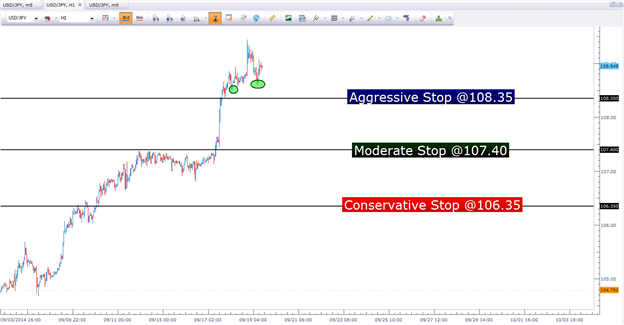 The conservative method of trading in stretched markets involves patience; and using the same support levels we looked at in the aggressive method but rather than entering a trader (for fear of missing out), the trader waits for price action to move towards a prior swing low so that a more affordable stop can be placed.

The best case scenario of the conservative method would be waiting for a ‘higher-low’ to develop so that the trader can place their stop below the previous low, allowing for somewhat of a cushion in the position.