If you can get a clean understanding of the typical patterns that develop before the trend resumes, you can find yourself entering at incredibly favorable entries with an excellent risk: reward ratio. This series of articles takes a look at common patterns that are known as trend corrections and can be applied to any time frame you trade.

Recap of the Prior Pre-Trend Patterns Discussed

The two patterns we’ve looked at so far are sharp zig-zags, which are 3-wave patterns against a prior trend that doesn’t make a new low and will often move into a Fibonacci retracement, and Triangles. Triangles are a congestion pattern that take up a decent amount of time but usually end with an aggressive thrust out of a triangle. A key note about triangles that we discussed was that the move out of the triangle can be the last move of the trend so you should be cautious of trend termination after the thrust out of the triangle is completed.

Triangles are clean and easy to read, however being caught with an open trade during a triangle while anticipating a breakout can be frustrating. For that reason, the article discussed key technical levels that can help you seen what a triangle is likely over and the trend has resumed.

The name may not be exciting, but the flat correction is a clean pattern that can help traders clearly define and take advantage of risk. Also, the flat correction can take the form of an intra-trend double-bottom, which makes it easy to spot and trade. This type of move often happens after a strong or extended move but once broken, a stop can be put under the correctionary low or you can trail your stop with each new swing low. 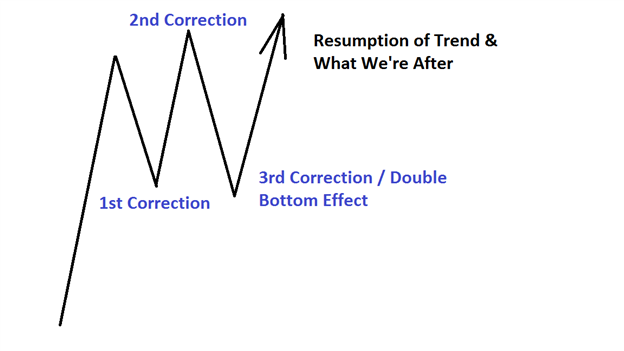 What’s important to see is that after a strong move higher or lower, the market goes into a period of consolidation or range environment. Cable or GBPUSD has had a handful of very clean flat corrections within the overall trend. You’ll notice that price makes no major moves higher or lower and looks to trace out the flag pattern, which is a traditional technical analysis pattern before resuming the trend.

All three of these instances took place on this chart and a variation of these three will happen more often than one would think as you look for these flat corrections to take place on the chart before the trend resumes.

There are clear benefits and a few drawbacks to trading the easily recognizable flat pattern. The benefit is that it is easy to recognize in bull and bear markets and the risk is very clear when you believe a correction has ended. The drawback is that if you’re entering on a break of ‘b’, you might have a hard time finding a trade with a good risk: reward ratio if you’re putting your stop below the recent pivot. For that reason, I like to look for the corrective move within the leg of the trade you’re about to enter.

You’ll notice above that you have two options for placing a stop when you recognize an entry. The path you choose will likely depend on your risk tolerance. If you’re looking to risk less, you’re likely going to choose the corrective high labeled as the “conservative stop”. The conservative name is due to taking on less risk to see if the trade works out in your favor.