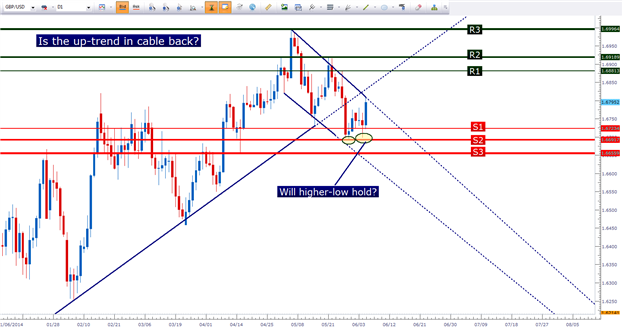 Pairs of Interest for NFP

The European Central Bank finally came through with the action that many around the world have been waiting for. The bank moved the deposit rate (the rate paid (now charged) on funds held at the ECB by member banks), into negative territory while also triggering a stimulus program with the intent of producing growth in the economy.

Initially on the announcement, the Euro drove lower towards 1.3500 until prices began reversing on the turn-of-a-dime. An hour later and prices had already rallied 150 pips higher to 1.3650.

The reality is that the stimulus program that was announced was largely disappointing in size and scope. While the initial excitement of the announcement helped to drive the Euro lower against most currencies, the momentum could not last as prices went directly back towards their pre-announcement levels.

But we’re not out of the woods yet. Tomorrow morning (8:30AM ET), the United States Department of Labor announces the number of Non-Farm Payrolls added in the world’s largest single economy, and this could certainly help to promote trends and promulgate price movements. In this article, we’re going to look at three setups of particular interest going into the monthly market mover known as NFP.

GBPUSD – Is the up-trend back in order?

Lost in the shuffle of this morning’s excitement was the non-announcement from the Bank of England. Since July of 2013, Sterling has been one of the strongest currencies in the world for quite a few different reasons. As is tradition in a trending market, the fundamentals have led the technicals. Improvements in UK data have seen traders bid the cable from a low of 1.4812 in July of last year towards the 1.7000 psychological level.

However, since that approach towards 1.7000 (which came just a few pips short of hitting ‘the big number’), prices have come down.

Weakness in the US Dollar on the back of Non-Farm Payrolls could see the pair move back towards its previous up-trend, and using the recently inset support could allow the trader to seek out aggressive risk-reward ratios.

USDJPY – Will the range hold?

One of the more consistent quantities of 2014 has been the range that’s been seen in USDJPY. After another spate of Yen weakness to open the year (similar to the year prior), the pair has been locked in a relatively tight range for over four months.

Many retail traders attempt to avoid ranges when, in fact, it may be a more operable environment to look for trade ideas; especially if you extrapolate the mania that can ensue in an environment like we had this morning.

On July 23rd, USDJPY fell below 104, eventually setting a low at 100.747 on the 4th of February. Since, we’ve had only a brief instance of resistance being tested with price action staying within a well-heeled range. 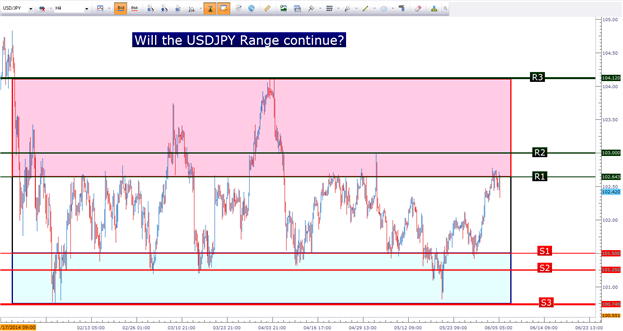 USDCNH – Is the Dollar preparing to rip?

One of the biggest macro-economic fears of 2014 has been the potential collapse of Chinese property prices. It’s even to the point where some investment banks have called the alarms as increases in real estate prices have begun to slow in many Chinese cities.

But like most other Central Banks around-the-world, the People’s Bank of China hasn’t been content to sit on the sidelines to watch the economy recess. The PBOC has added liquidity to the system on a number of occasions, and what was one of the strongest trends of 2013 has put on a massive reversal: 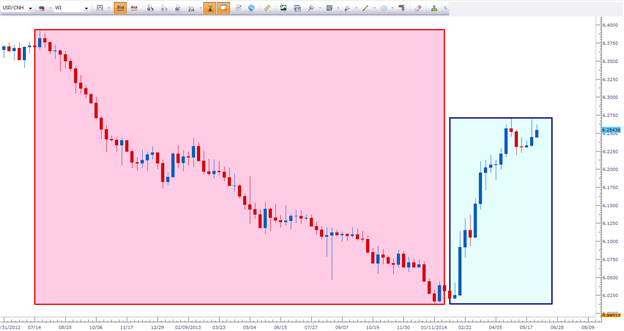 As we saw in the article, The Nucleus of the FX Market, currency weakness is important for export-based economies like China (and Japan). So the desire for a weak Yuan is obvious, and if the US Dollar is in a pattern in which strength may continue, USDCNH is an area where traders may be able to look for comfortable trends should these fundamental drivers continue. 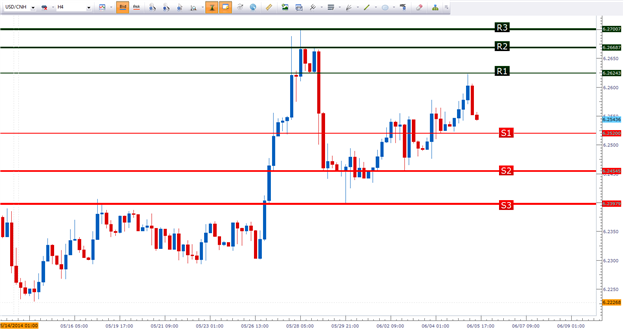