An Uncommon Risk-On Set-Up with Ichimoku

On Tuesday, April 15th, many traders who focus on Japan heard something they wanted to here. On the surface it sounds bad for the outlook of Japan but it was enough to encourage traders around the world to look at this event as a potential trigger for the next round of QQE from the Bank of Japan.

Learn Forex: Global Equity Markets All Spike at the Same Hour on the Same News 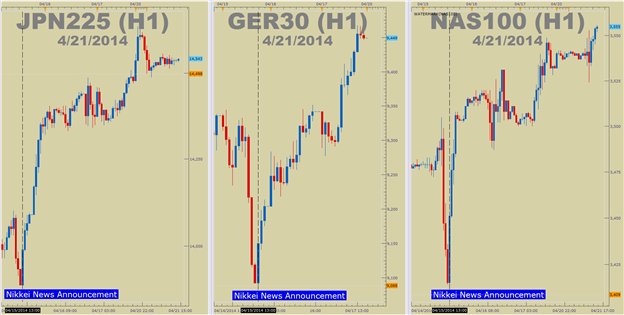 Here was the news that shocked markets into risk-on around the world:

This was enough to keep traders focused on the same stimulus that’s been in play for a long time, Quantitative Easing. The argument went like this. Because Japan will downgrade their economic assessment, the road has been paved for the Bank of Japan to introduce another round of Quantitative and Qualitative Easing or QQE which is a powerful force to push equities higher and push down the home currency, the Japanese Yen.

The Risk-On Effects of CHF

Many traders know the Japanese Yen & the US Dollar as a risk-off currency. This means that in a risk-off environment, many institutions in Japan sell global equities and rush into Japanese Government Bonds or JGBs. In addition to the incredibly large institutional money in Japan, money managers all over the world look to safety from the US Treasuries, which are seen as some of the safest in the world and to buy US Treasuries, one must do so through the USD. Therefore, in times of extreme risk-off, you’ll often see the USD strengthen through US Treasury purchases or JPY strengthen through JGB purchases.

Another key currency to strengthen in times of duress is the Swiss Franc (CHF) In fact, the CHF strengthened so much in 2011 that the Swiss National Bank had to step in to prevent the CHF from strengthening too much and hurting their export portion of the economy. Many attribute the flat inflation figures in Switzerland that make the “Swissy” as a global risk hedge.

However, the risk-off environment that favors CHF longs makes a risk-on event favorable to sell the CHF. The question then becomes, what is a favorable currency to buy against the Swiss. This brings us to a Strong Weak comparison that shows how AUD or GBP may be a favorable set-up.

Learn Forex: Strong Weak Comparison with a H4 Chart Against the 200-dma

While there is more than one strong currency, the strongest currency across the majors has been the Australian Dollar based on relative price action. After having a rough 2013, the Aussie is making up for lost ground. When Ichimoku is combined with AUDCHF, you’ll recognize that a bullish environment was just confirmed for the first time since Oct. 2013.

Before we breakdown the Ichimoku set-up, you should look at the other factors at play on AUDCHF. First and foremost, you’ll notice that the 200-dma (yellow) has currently stopped price. However, if that breaks, you’ll notice an upward channel (blue lines) as well as an Inverse Head & Shoulders (yellow circles) which is a bullish reversal pattern. This confluence of different chart patterns shows you that many traders who utilize different charting methods could be chasing AUDCHF higher in the near-term.

If this is your first reading of the Ichimoku report, here is a quick run-down on buy side rules:

Now that you're familiar with a budding opportunity on AUDCHF with Ichimoku, feel free to try this information out on a FREE Forex Demo Account with access to multiple markets.

Claim your FREE universal membership to DailyFX Internet Courses & save yourself hours in figuring out what FOREX trading is all about.

You'll get this FREE 20 minute “New to FX” course presented by DailyFX Education. In the course, you will learn about the basics of a FOREX transaction, what leverage is, and how to determine an appropriate amount of leverage for your trading.

You can instantly register for free here to start your FOREX learning now!

What is the IBEX 35 Index and what influences its price?
Advertisement