Many Forex traders lump Stochastics together with other oscillators like RSI and CCI which are used to find overbought and oversold conditions. When a currency pair is oversold, traders look for a buying opportunities while if it is overbought, they look for sell trades.

Though Stochastics can be used to find these overbought and oversold regions, George Lane, the man credited with inventing Stochastics, had a different purpose for the indicator. He noticed that “…momentum changes direction before price.” So he created Stochastics not to follow price or volume. He created Stochastics to follow, “…the speed or momentum of price.”

Below we can see an example of a GBPUSD uptrend on a 4-hour chart. Higher swing highs and higher swing lows can be observed from the middle of March to April of this year. After making a high of 1.6819 on 4/9, GBPUSD has been in a corrective decline that accelerated to a low of 1.6655 on 4/15 before rebounding back to 1.6723 the same day. 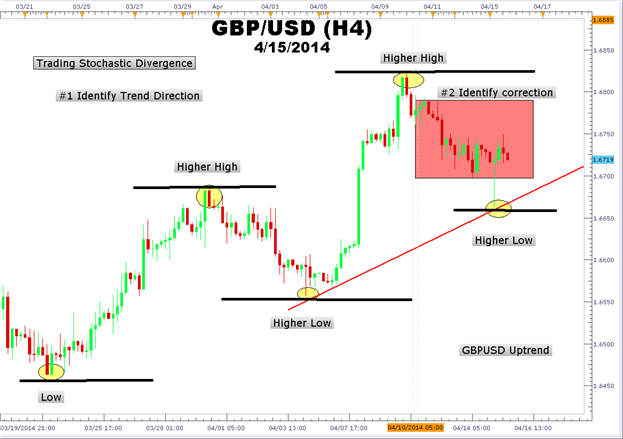 Find Extreme Move in Price not Confirmed by Stochastics

Usually, as price move lower, Stochastics moves lower as well. However, if price makes an extreme move lower while Stochastics moves higher, then we have positive divergence. This disagreement between price and Stochastics often foreshadows a price reversal. Before traders can jump on this signal to buy, additional confirmation is needed. 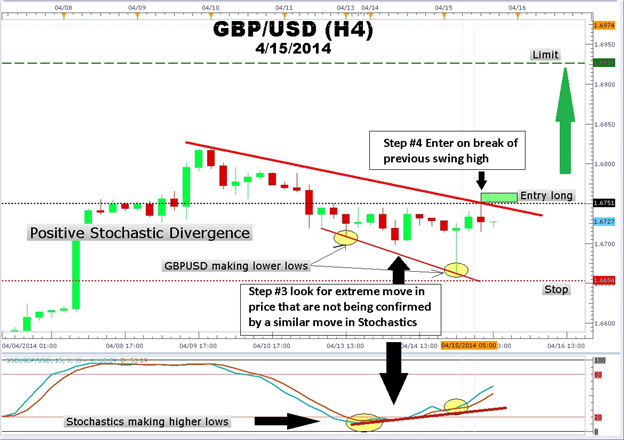 Traders can get long on the break above a previous swing high or prior level of resistance. If GBPUSD is able to close above the red downtrend line and the swing high in the 1.6751 area, we would have confirmation that the divergence signal was valid. If GBPUSD is not able to break and close above the red trend line, then the divergence signal would be invalid and we would move on to another trade.

Since no strategy can guarantee profits, traders should use stops and limits to minimize risk and maximize profits. Placing a stop below the last swing low is one place to locate a stop. However, due to the length of the wick on the doji Japanese candlestick, traders may want to place a stop at the halfway mark of the candle. A limit that is equal to two times tthe number of pips for the stop could be set

As you are able to identify more Stochastics divergences on charts, you may want to reinforce your learning with practice trades. Use a Free Forex Demonstration account with FXCM. In this way you can develop your trading skills with the market in real time!

I want to invite you to enroll in our free Fibonacci Retracement Course. Stochastics can be used along with Fibonacci to find turning points in the market. Sign our Guestbook to gain access to this course. You will automatically have universal access to other courses.