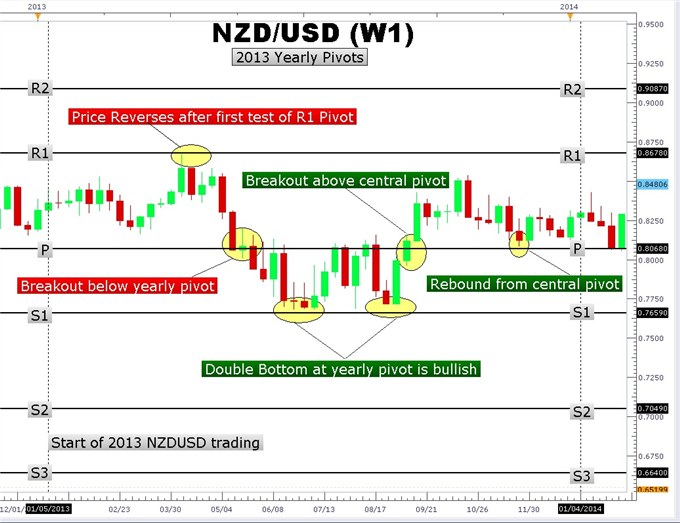 First of all, let’s take a quick trip back in time to take a look at how forex yearly pivots worked to create an operational trading framework for NZDUSD price action. As 2013 NZDUSD trading got underway, price action was trapped in a fairly tight range for the first three months of the year.

The Kiwi was unable to stage a successful rally from the central pivot. Price broke below the pivot and collapsed another 409-pips down into the area of the S1 pivot at 0.7659. From the yearly S1 pivot, NZDUSD staged a couple of rallies in July and August back to the central pivot forming a very visible double bottom chart.

This double bottom bounce form the S1 pivot led to a powerful 831-pip move into the 0.8500 handle. As you can see, yearly pivots marked the beginning of powerful moves. But could forex history repeat for NZDUSD in 2014? 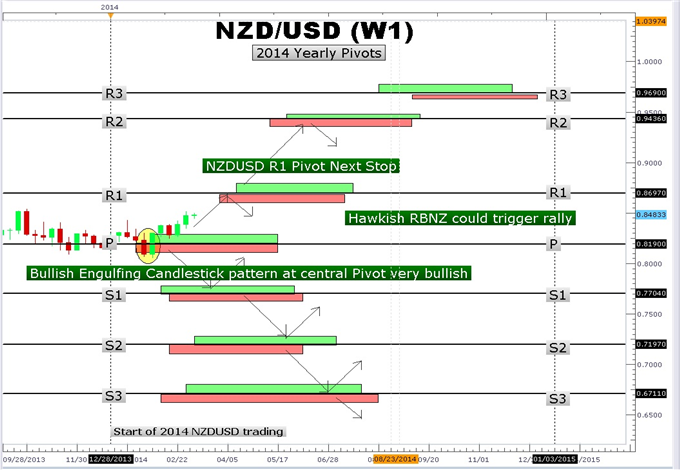 Unlike 2013 where NZDUSD got off to a slow start before rallying, Kiwi immediately moved down to test the 0.8190 yearly pivot at the start of 2014. After two weeks of trading at the yearly central pivot, NZDUSD broke out with a bullish engulfing candle. NZDUSD has been up trending ever since and currently sits at the 0.8468 area.

This is roughly the midpoint between the R1 pivot at 0.8697 and the central pivot at 0.81900. The bullish engulfing candlestick pattern is a great reversal candlestick pattern. It represents a shift in the overall market sentiment from bearish to bullish. A daily close above the R1 yearly pivot could open a path to 0.9436.

Today at 4:00PM ET the Reserve Bank of New Zealand (RBNZ) coming out with their rate decision. It is widely expected that New Zealand’s central bank will hike rates 25 basis points from 2.50% to 2.75%. This will be the first rate hike since 2010. Investors and traders usually follow yield; NZDUSD could move higher toward the R1 pivot at 0.8697.

On the other hand, if the RBNZ fails to raise rates, we could see a Kiwi sell-off back toward the central pivot at 0.8190. Though Forex traders only put yearly pivots on their charts once, yearly pivots can produce several good trading setups over the course of the year.