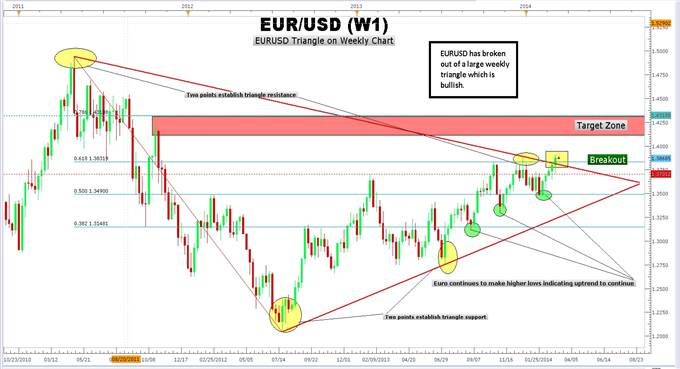 Despite geo-political instability, courtesy of Russia and the Ukraine, slow economic growth, and joblessness, the Euro has been extremely resilient. In fact, the Euro has been one of the strongest currencies pushing to 2011 highs for the second time in three months. Since hitting a low of 1.2041 on July 21st 2012, the Euro has rallied over 30%. This surge has broken above a key 61.8% Fibonacci level at 1.383. In addition a triangle chart pattern resistance line was breached as well.

Notice that on April 30, 2011 the Euro hit a high of 1.4938 and over the next 15 months proceeded to decline almost 2900 pips. Taking a Fibonacci retracement from this high to the July low reveals levels of hidden resistance. These levels clearly show where the Euro has reversed its rebound and then broken out higher to the next Fibonacci level.

The 61.8% Fibonacci level is a very significant level as Euro sellers may have considered it the last place to make a stand to push prices lower. These sellers may have found some comfort in the overhead resistance downtrend line, originating from the 4/12 high, would back up their efforts to sell the Euro short.

The next level of Fibonacci resistance is the 78.6% level which is located at 1.4318. With little in the way of resistance above the 1.3920 area, Forex traders will be looking for an accelerated move into the 1.4120 to 1.4318 area. Weak US retail sales on March 13th or lower Consumer Confidence and PPI on March 14th could be the news needed to spark this move higher. The Euro is considered the 'anti-dollar' and usually responds positively to negative US economic numbers. On the other hand, better than expected US economic data could trigger a move back below the 1.3642 February 22nd low would cast doubt on bullish advance. Remember to always use stops.

This article showed you how to use Fibonacci to trade GBPJPY bounce. I want to invite you to enroll in our free Fibonacci Retracement Courseto further your understanding of Fibonacci. Sign our Guestbook to gain access to this course. You will automatically have universal access to other courses.