Is the Job of a Forex Trader to Know the Future?

“The objective is not to buy low and sell high, but to buy high and to sell higher. We can never know what price is “low.” Nor can we know what price is “high.” Always remember that sugar once fell from $1.25/lb. to 2 cent/lb. and seemed “cheap” many times along the way.”

Many traders understandably want to know what is going to happen tomorrow. Of course, we have no ability to know what tomorrow’s close will be or where the exact pivot in price will be. This is why we key in on important price action and fundamental developments. Being on the front edge of this type of information can help us get an idea of whether a trend will continue or more importantly if the edge with which is entered the trade is beginning to wane and whether or not we should scale out of the trade.

Get Real about What We’re Trying to Do

Because we don’t know the future, we can only rely on one thing. We can only embrace that trading is about the odds of being in a good trade and in addition to that, increasing our odds so that we can make money trading the Forex Market. Naturally, we like to increase our odds that the trade will be successful by entering in the direction of a trend off a clean correction that is losing steam with a system like Ichimoku or moving averages.

However, we know that not every trade will be a winner so we fight to protect our trading capital. In fact, learning where to appropriately take losses which Gerald Loeb names as the most important single investment device to insure safety of capital should be referred to as the truth of trading. Therefore, what we’re really trying to do in the end is use the present information or price action as well as developing fundamental story to build up a trading idea that would allow us to profit in the market while not risking too much of our account on any one trade.

Entries Should Be Built Upon Evidence

To expand on that point, you should note that after first fighting to protect your trading capital you should enter into trades that are showing incremental evidence that the trend is continuing to build. As James P. Arthur notes in his market Truisms & Axioms, “Commandment #1: Thou Shall Not Trade against the Trend.” Knowing that we should not trade against the trend, we can look for a solid fundamental backdrop that aligns with a technical opportunity to enter in the direction of the trend at a favorable level while picking a point to protect your capital.

Learn Forex: In a Clear Uptrend like USDJPY, It’s best to be Neutral or a Buyer

The purpose of the argument to be long or neutral is that there is a driving force behind the trend. Most often, the driving force is a developing fundamental imbalance which favors the currency being bought over the one being sold. Therefore, trading against the trend is a hard and risky way to make money long-term which is our key goal. Once the evidence is clean and worth risking your capital in order to grow it, you can look to enter into the trend with decent profit targets that will likely lead to leaving money on the table.

Preserve mental Capital by Taking Money off the Table

This short article is to encourage you as a trader by improving your odds even when the future is not known. You were just introduced to the argument that because you do not know the future, you should look to enter into the direction of the trend when credible evidence presents itself at a favorable price of the market. The last key thing you should be comfortable with as a trader who doesn’t know the future is having an ability to either leave money on the table or miss a trade that doesn’t feel right to you. 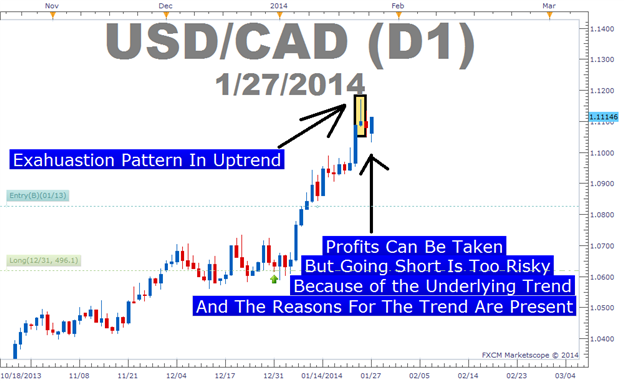 One of the most famous investors of the 21st century, Bernard Baruch made the famous and appropriate comment, “I made my money by selling too soon.” This quote backs up another saying in trading that the one who leaves the most money on the table, leaves with the most money. It’s tempting to hold onto a trade that is trending but when your target is hit, you should get out without hesitation because what you wanted out of the trade was done.

Neither you, nor the next trader, nor the biggest bank trading desks on Wall Street know the future. Therefore is important that you stay away from chasing highs or lows because we don’t know what will be a high and what will be a low. Also, you should look to enter a trade in the direction of the trend when the proper amount of evidence according your trading system is present and be ready to exit the trade when your target is hit as opposed to being around for the big reversal when crowd psychology takes over and every one leaves the trade you were riding.