The trend is our friend. We all know it, but matters aren’t as simple as noticing a prevailing trend and accordingly buying or selling.

If it were, you would like not be reading this article right now.

The fact of the matter is that trends change, or reverse; and when they do this can become a costly endeavor as new trends can form. If we’re on the wrong side of the move the trade may continue to bleed our equity until the trader has to inevitably waive the white flag to close the position.

Just one or two of these types of bad trades can wipe away the gains from numerous successful ones, and this isn’t something that happens rarely. This is The Number One Mistake that Forex Traders Make, losing far more when they are wrong, on average, than they win when they are right.

This is one of the areas where price action can present so much value. What follows is a methodology that traders can use to identify trends, assimilate risk-reward ratios, and look for entries into position in which the trader can look for trends to continue.

While there are numerous ways to detect or diagnose trends, there are far fewer ways to detect reversals; which is, after all, what the trader wants to look to avoid. The simple fact of the matter is that the future is unpredictable whether we’re using moving averages, oscillators, or price action.

Some trends continue, others do not; and as a trader we’ll never be able to predict which will happen until after the fact. All that we know is that up to that point in time, a trend had developed for some reason. It might have been a fundamental shift in an economy, or perhaps a major technical level was hit that greatly changed the supply and demand in that market.

And it’s exactly because trends and future price movements are unpredictable that traders should look to utilize favorable risk-reward ratios (in which the trader looks to profit more than they risk on each individual trade). This way, if the bias that has been seen in the market continues, the trader may profit handsomely… but if a reversal or correction is afoot, the trader can mitigate the loss on the position and look for greener pastures elsewhere.

One of the luxuries of price action is that it has this facet built into its logic.

If a currency pair is trending higher, it will often make the move in a format similar to ‘two steps forward, one step back.’ Rarely does a trend develop in a straight line, and it’s this exact gyrating nature of trends that can allow traders entry opportunities.

Up-trends are defined through price action by a series of ‘higher-highs,’ and ‘higher-lows.’ 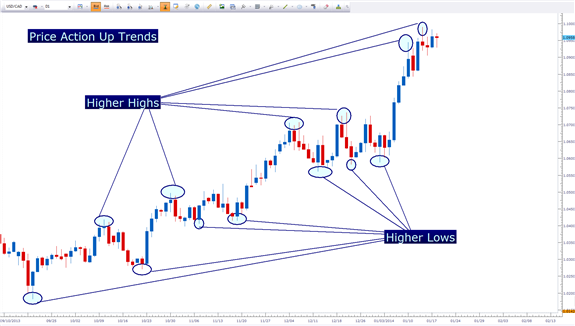 Down-trends are exactly the opposite of up-trends, but utilize the same ‘two steps forward, one step back’ type of logic that up-trends show. Down-trends will often show up on the chart as a series of ‘lower-lows,’ and ‘lower-highs.’ 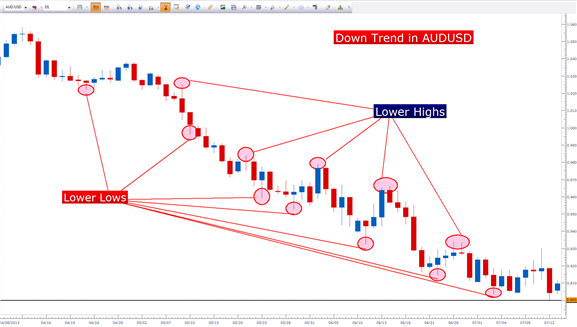 While grading a trend via price action isn’t necessarily going to predict future price movements on the chart, it can allow the trader to dial in on the setup to look at the most risk-efficient way of placing the entry.

Traders are often best advised to trade in the direction of the trend ONLY; under the premise that the identified bias that has been seen in the market that has brought on that trend may continue. And because we’re looking at the gyrating swings that prices put in during these trends, the entry methodology is built in.

During up-trends, traders want to look to buy shortly after a ‘higher-low’ has been made.

During down-trends, traders should look to sell shortly after a ‘lower-high’ has been set.

After that, the traders focus should then move to the risk-reward of the setup.

Because the trader is looking to buy after a recent ‘higher-low,’ the risk management of the position is somewhat of a given. We examined this topic in-depth in the article, How to Identify Positive Risk-Reward Ratios with Price Action.

After all, if a trader is buying an up-trend, and prices go on to make a ‘lower-low,’ a reversal may be coming into the marketplace; and the question that needs to be asked is how long the trader wants to hold on to the trade when the market might be moving in the opposite direction?

Traders buying up-trends can look to place their stop under the most recent swing low; so that if a reversal does come into the marketplace the trader can bail out of the position at a minimum of a loss.

Buying after ‘One Step Back’ 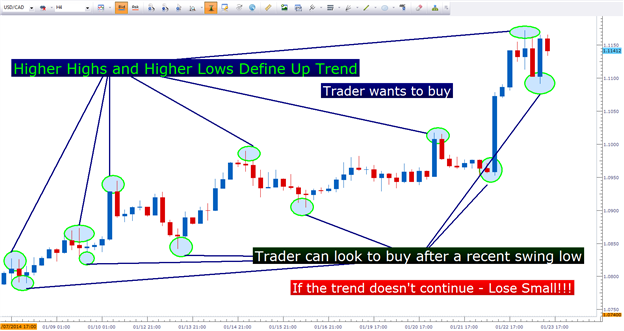 Traders selling down-trends can look to institute the same type of logic: Placing stops above the most recent ‘swing-high’ so that if the down-trend reverses and a ‘higher-high’ is made, the position is closed as the trader looks to mitigate their loss.

Entry into the Position

After the trader has diagnosed the trend, and found a favorable risk-reward ratio where they can feasibly look for a bigger profit than the amount they have to put up to risk; the trader can then move on to the entry into the position.

We looked at this topic in-depth in the article, The Price Action Trigger.

To enter into the position, traders can incorporate Multiple Time Frame Analysis to get a more granular and detailed look at recent price action.

And since traders already know the direction they want to place the trade based on the trend that was seen on the longer time frame, the shorter time frame can be an early sign of potential trend continuation. And since traders are looking to enter after a recent retracement (buying after a ‘higher low’ was set, or selling after a ‘lower high’ was made), the shorter time frame can bring in the luxury of being able to use price action logic to enter the position.

When prices on the shorter time frame begin showing a series of higher-highs and higher lows (after a recent ‘higher-low’ was made on the larger time frame), the trader can look to initiate the long position with a stop below the most recent swing-low.

If trading a down-trend, traders can look to sell after a ‘lower-high’ was made on the longer time frame as prices in the shorter time frame begin making ‘lower-lows,’ and ‘lower-highs.’