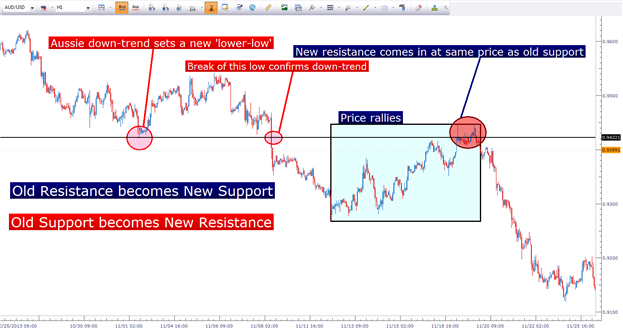 The Three Tenets of Price Action

As traders, our job is not easy.

Price action can be a valuable tool for the trader. The benefits of price action are numerous, and we looked at some of the highlights in the article Four Simple Ways to Become a Better Price Action Trader.

In this article, we’re going to discuss three of the most pertinent themes of the study of price action.

One of the greatest aspects of price action is that its logical. Trends rarely develop in a straight line… usually an up-trend is a series of higher-highs, and higher-lows; while down-trends are often series of lower-lows, and lower-highs.

More interesting is the fact that in an up-trend, as prices are making higher-highs and higher-lows; the resistance from the previous ‘higher-high,’ can, in many cases, become a similar price level for the next ‘higher-low.’

In essence, previous resistance has become new support when prices are trending higher. Let’s take a look at the recent down-trend in the Aussie-dollar as an example:

Tenet #2 The past cannot predict the future, but it can help work with probabilities

One of the inherent difficulties of technical analysis is that the past is not always going to be indicative of the future.

Things change…trends reverse… and new information finds its way into the market at a break-neck pace.

So, we can look to buy up-trends cheaply, or to sell down-trends expensively in the effort to get the probabilities on our side as much as possible.

If we see that the Aussie is trending lower or that the Sterling is trending higher – it’s not enough to simply buy or sell and ‘hope’ that profit produces itself. We need to be tactical in an effort to avoid The Number One Mistake that Forex Traders Make (looking for advantageous risk-reward ratios).

We outlined this approach from the perspective of a swing-trader in the article The Four-Hour Trader, a Full Trading Plan.

Traders can use price action to look to buy up-trends cheaply, or sell down-trends expensively

Taken from The Four-Hour Trader, a Full Trading Plan

While looking for risk-efficient entries won’t help you tell the future any better, it can mitigate the damage from the trades in which you are incorrect, while looking to maximize the benefit when you are on the correct side of the move.

As human beings, we can’t help but think in round numbers…

For example, if I ask someone how much they paid for their automobile, they’d likely round the amount up or down to give me an even number. As in, most human beings won’t respond with an exact dollar and cents amount… they’ll often just say ’39 grand,’ or maybe something like ‘40k,’ but rarely will someone respond with an amount like $39,256.23.

The reason is because, as human beings – most of us wouldn’t care about the $256.23 in the response… we just wanted a ‘ballpark’ type of answer, and as people we value simplicity.

This comes into trading as well.

Many traders will place stops or limits around whole numbers; like the price of .9000 on AUDUSD. And when the price on Aussie ripped down to .9000, those sitting orders changed the order flow (and the price) massively. 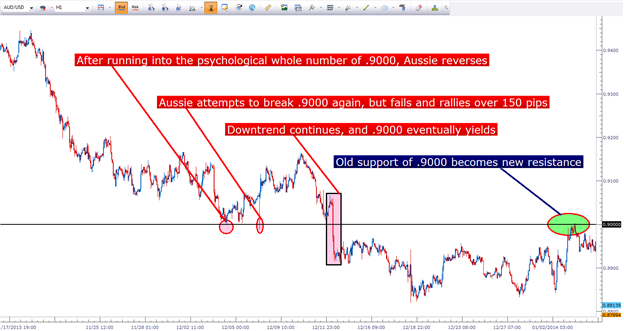 Notice that on two separate attempts, price reversed at the .9000 level; and on the third attempt support of .9000 eventually yields as the down-trend in Aussie continues.