"You have to minimize your losses and try to preserve capital for those very few instances where you can make a lot in a very short period of time. What you can’t afford to do is throw away your capital on suboptimal trades." -- Richard Dennis

It’s easy to over simplify trading. Many traders think that trading is a two pronged game made of very simple rules. Rule 1: Guess or know where the market is going next based on superior analysis and Rule 2: Place a trade in the direction of your analysis and depending on how good you are the bigger the better. Of course, it isn’t that simple.

Why Trade Size Is Tempting

New traders all too often look for the ‘can’t fail’ system or Holy Grail of analysis. It’s easy to feel that once you’ve found the Holy Grail, then you can amp up the trade size to immediate riches. It’s important to understand, this is a short-term recipe for excitement and long-term recipe for disaster. The reason is that one bade trade with too large a trade size can set you back, days, weeks or months.

Learn Forex: Regardless Of My Conviction, Trade Size Needs To Stay Limited 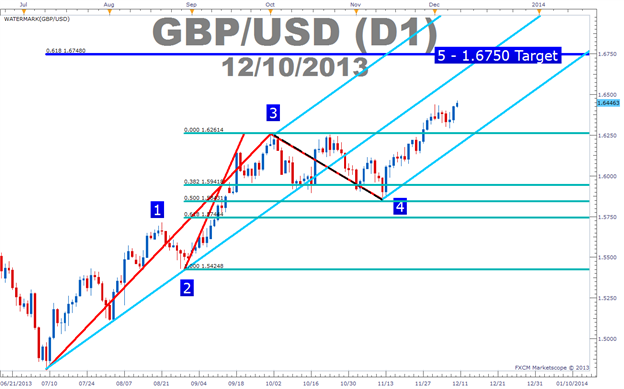 This chart of GBPUSD could give you very clear conviction that GBPUSD could move higher. There is an Elliott Wave count that looks to be taking GBPUSD higher along with a Fibonacci Expansion moving showing a 1.67500 target, the UK economy is fast improving, and the Speculative Sentiment Index is at -3.29 showing 67% of retail traders are short (this is a contrarian buy signal). However, despite all the confluence that is happening on this chart, there is no certainty in the end.

The key issue is that many traders need to avoid is the belief that once they have figure out how the markets work then they’ll be ahead of the markets and can capitalize on that by placing trades with a lot of leverage. The temptation needs to take a cold shower because there are thing beyond your control that can take the best ideas and see them fail and your account drop.

Bottom Line: Traders should look for confluence or for an objective edge before entering a trade but no strategy should lull you into trading to large trade size because one outlier event or miss placed analysis can hurt you possibly beyond repair.

Why Too Large A Trade Will Likely Eventually Cause Ruin

Of course, it’s great to find a trade where everything comes together. Maybe, a large disparity develops where a central bank like the Reserve Bank of New Zealand begins discussing raising interest rates while another discusses lowering interest rates or QE. That type of monetary policy disparity is the type of fundamental set-up that many traders crave.

However, regardless of the background behind the set-up, it’s easy to think that now is the time to go “all-in”. However, there is always risk in a trade because you don’t know the outcome and as Mark Douglas pointed out in his seminal book, Trading in the Zone,” The market can do anything at any moment because every person who trades is a market variable. That means you will never learn enough to anticipate every possible way that the market can make you wrong or cause you to lose money.”

It may help you to think of the “rogue traders” that have worked for banks like JPMorgan, UBS, Société Générale, or Barings (since sold due to the bad trader). These traders had the same emotional make up as you do and knew that a big trade would pay-off big. However, the risk got out of hand and the market went the wrong way which cost their banks billions and them their ability to trade again.

Bottom Line: Your emotional makeup will make it tempting to trade large when you think the stars have aligned for your trade but think of others before you who acted on that temptation and brought down major institutions and careers.

Risk: Reward with Proper Trade Size Is a Safer Path

If you wanted to sell a trading system, the quickest and easiest way (this is not a recommendation) would be to tout a very high win%. Win percentage or the ratio of winning trades to overall trades makes you sound like you’ve cracked the code to the markets. However, because even Wall Street’s biggest institutions that devote millions of dollars in a research and analysis desk have losing quarters, it’s not a matter of if you’ll lose but rather how much of your hard earned equity will you give back to the market when you do?

Learn Forex: USDMXN Made an Impressive and Surprise Break To the Downside

This may seem like a pessimistic question but it is important that you have a plan when the market goes against your trade. A recent example was after the December NFP when USDMXN broke a major trendline to the downside off a positive NFP as the fed is considering tapering which is overall US DOLLAR positive and likely negative for EMFX like the MXN. I bring this up because I placed a losing trade on USDMXN but my loss was limited to 2% of my account capital because I knew that I didn’t know what the future would bring even with the confluence that was present. Even though a loss was taken, it was a good trade due to the risk to reward or reward sought on risk taken.

The longer you trade; you’ll quickly realize that the ability to survive trendless markets is part skill and part science. The skill comes from knowing that there are trending markets and there are ranging markets and if you’re familiar with which market you trade best, you’ll be able to focus on the skill set that favors your success and stay away from the market environment where your edge dissipates. Lastly, you’re survivability will be in larger part to your ability to manage risk. When you’ve learned to manage risk, regardless of your expertise in analysis, you’ll be able to weather the storm and be there when the market that favors your expertise.

Bottom Line: You can only ignore how much risk you’re taking for so long. Eventually, you’ll need to decide how consistent you want to be in the markets and long-term consistency and success will come from an appropriate method to manage risk while seeking reward on every trade regardless of how many favoring factors are behind the idea.

Trading FX or any other market is overloaded with tempting but disappointing shortcuts. Of course, a shortcut doesn’t necessarily represent the best bath. What’s worse, when you believe you’ve found a shortcut, you’re likely to increase the trade size which only requires one trade to not play out like my USDMXN trade which if overleveraged could have wiped out a successful end to 2013. The better and safer path overall is to focus on the limited risk in relation to the reward you’re seeking on every trade.

Have a Happy & Safe Trading This Holiday Season & Beyond.

Are you new to the FX market? Learn to trade like a professional with DailyFX!

Signup for this free “Trade like a Professional” certificate course to help you get up to speed on Forex market basics. You can master the material all while earning your completion certificate.