Trading the Strong and the Weak

Many traders in the currency market have yet to learn one of the best things about trading Forex… And it’s not that they don’t know, as much as it’s something they don’t yet realize: And what I mean is: You can be wrong, and still win. This is one of the great parts about trading two-sided pairs.

Let’s say, for instance, that you expect weakness in Euro, for whatever reason. And let’s say that whatever expectation you had didn’t come to fruition; i.e., you were wrong. So, rather than weakness, the Euro saw strength.

But what if you traded Euro weakness through a short EUR/USD position, and the US Dollar got even stronger than the Euro when your analysis proved incorrect…

Well, EUR/USD would go down because USD got stronger than Euro, and even though you were wrong – you could still win in the trade.

The Value of a Two-Sided Pair: You can be wrong and still win in the trade 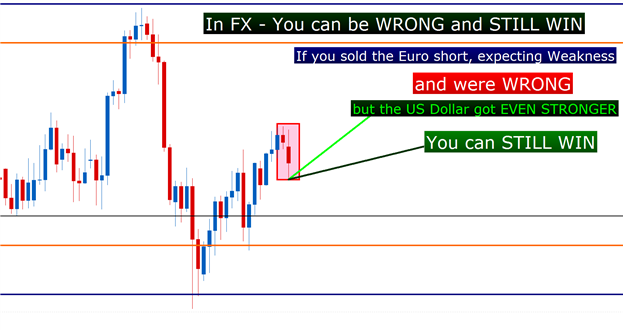 Traders have an extra dimension to every one of their positions in the FX market. If you want to trade a stock, you basically have two ways to voice your opinion – you can buy or you can sell. In the Forex market, if you decide you want to sell Euros, you have a plethora of ways to do it. You can sell Euros against US Dollars or Japanese Yen. Or perhaps you wanted something a little more conservative, in which you could choose nearby trading partners using British Pounds or Swiss Franc.

In the FX market, it behooves the trader to add that additional step to their analysis; after deciding that they want to buy or sell a currency, then moving on to choose which currency they want to use to create the most favorable setup possible.

The Importance of Strength and Weakness

The flip side of the above scenario is that we can be right and still lose. Let’s use the same scenario, in which you’re looking for Euro weakness, and let’s say that Euro zone GDP comes out much weaker than expected. So - you were right.

Sure, the Euro should get weak; but let’s say in this scenario that the weaker-than-expected GDP actually increases investor’s hope for an extension of QE3 and a later-than-expected tapering of QE purchases from the United States. In this case, the Dollar may get much weaker than the Euro; and even though Euros may weaken against Sterling, or Australian Dollars, or Japanese Yen; if you’re trading EUR/USD – you were right and you are still going to lose.

So, if you’re going to trade a currency for weakness, you want to match it up with a currency with which you expect strength to give yourself the best probabilities of success. This way, if your idea doesn’t work out, you still have a chance of winning the trade if the other currency in the pair performs as expected.

Strong/Weak Analysis in a Strategy

Trends develop from deviations in strength and weakness… if the Euro is stronger than the US Dollar over a period of time, prices will be trending higher. That’s one of the great parts about technical analysis; it will give us an honest depiction of strength and/or weakness in each pairing over whatever time frame that we want.

Unfortunately, those deviations don’t always continue; which is why traders need more than just technical analysis to trade in markets, as we outlined in The Complete Trading Approach.

There are multiple ways of grading a currency’s strength or weakness; and we outlined two in the article, An Easy and Advanced Way to Find Trades in the FX Market.

Strong/Weak Analysis to the Scalper

This brand of analysis is extremely common for short-term traders (commonly called ‘scalpers’ in the FX market).

The allure of such a system is logical: If traders are able to find longer-term trends, or ‘bigger-picture’ moves, they can look to scalp inside of those moves in the direction of those trends.

My own scalping strategy that I call ‘Fingertrap,’ looks to do just that; as I outlined in the article Short-Term Momentum Scalping in the FX Market.

Scalpers are often best served by identifying trends on the hourly and/or four-hour charts so that they can look for that momentum to take their trade(s) on the shorter-term chart to profitable territory.

Scalpers can look for pairs with the greatest strength/weakness deviation on the hourly chart, and then look for a short-term pullback in prices.

After the retracement has finished, as the pair moves in the direction of the general trend, traders can look to enter in that direction; anticipating that the longer-term trend may win out.

Traders can look to trigger in a variety of ways. An oscillator on the shorter-term chart can be an excellent entry mechanism, as can a cross of a moving average.

Scalpers can use strong weak to find the trend; and enter using indicator triggers 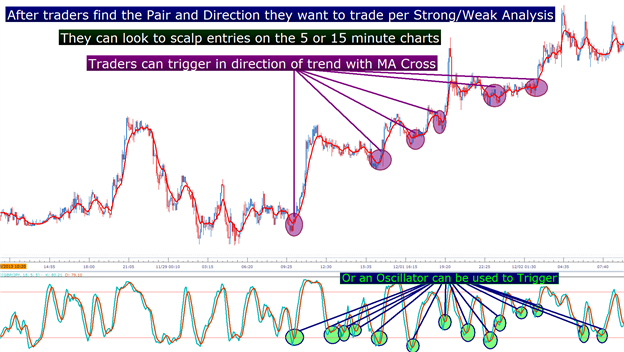 Strong/Weak Analysis to the Swing Trader

Swing traders take a slightly different view on markets than the scalper, but the approach is often similar with longer time frames being used.

We outlined such an approach in The Four-Hour Trader.

Swing traders can look to the four-hour, and daily chart to grade trends and determine biases that they may want to work with. And like the scalper, they often want to wait for prices to pull back in those trends so that they can look to buy low, and/or sell high.

Traders can look for pairs with the greatest strength/weakness deviations, and look to trade those pairs in the direction of the trend after the currency pair retraces.

Traders can look to trade in the direction of the trend, triggering with an Oscillator or moving average entry as seen above; or by using a price action formation such as a Bullish Hammer as outlined in The Four Hour Trader.

Image taken from The Hammer Trigger for Bullish Reversals

Traders with a long-term fundamental viewpoint often have this bias based on their own macro-economic analysis. Perhaps they expect weakness in Europe due to structural problems with debt obligations, or maybe they’re looking for weakness in the Yen under the expectation of another round of Abenomics.

These traders can use Strong/Weak analysis for a couple of different purposes.

First and foremost, these traders can use Strong/Weak analysis to properly voice their trade opinion in the first place.

If you want to look for weakness in Yen, marry the currency up with something that you expect to get stronger. Dollars have been popular lately, as has the British Pound. Just as we described above, this could give the trader the best chances of success simply by voicing his trade idea in the cleanest, most proficient manner possible.

But longer-term fundamental traders can take Strong/Weak a step further with actually timing the trade.

Let’s say that our trade above decided to buy GBPJPY in the expectation that Japanese weakness would bring another round of QE, while expecting strength British Pounds on the back of an improving UK economy.

So the trader that wants to go long GBPJPY can trigger into the position with Strong/Weak analysis.

The longer-term trader wants to perform their analysis at roughly similar times each day; allowing them to make apples-to-apples comparison with market dynamics.

Even though the longer-term fundamental trader differs in vantage point and outlook from scalpers and swing-traders, it doesn’t mean they ignore risk management; and they too should look to ‘buy low – sell high.’

Longer-term fundamental traders can wait for the British Pound to show weakness, and/or the Japanese Yen to show strength; amounting to a pullback or retracement in the pair.

After at least two days of retracement, the trader beings plotting an entry to get long. On the first day that shows strength in the pair (GBP goes up by more than JPY or JPY goes down more than GBP); the trader triggers the position, risking a percentage of their account on the trade idea as a stop.

They look at the position each day whilst performing their daily analysis, adjusting the stop as appropriate if the position moves in the traders favor.

After a trader has a profitable position, they can use those profits to finance additional positions should the trend continue moving higher. This is the way many of the greatest traders have speculated, turning big moves into huge gains, all financed by one initial position.