How to Adopt a Positive Trading Mentality

Learning to trade is like anything else in life where experience is often the best educator. It takes time to get where you want to be as a trader.

This is The Number One Mistake Forex Traders Make; and this is something that we can all fix by adopting the right mindset, and sticking to our plans.

You have to read between the lines

Why 50%? Well, likely it’s because of simplicity. It means you won more often than you lost; which could be a very, very rudimentary manner of grading success.

In trading, this couldn't be more misleading. This is just like we saw in The Number One Mistake: In many cases, traders won well over half the time… like in GBPJPY, traders won 66% of the time. 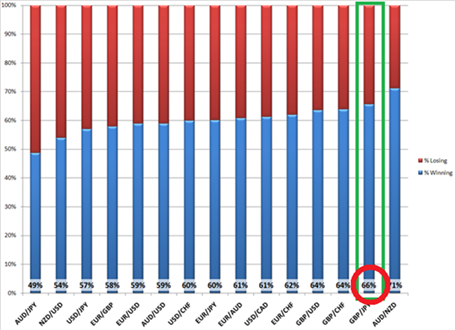 So, if we take a 66% winning percentage in GBPJPY and apply the rudimentary logic in which 50% success rate was the determinant between success and failure; we’d be misled pretty badly.

Because these traders in GBPJPY, despite winning nearly two out of every three trades, still lost money…

It’s because they were SO wrong in their losses, and not ‘very right’ in their wins.

The biggest winning percentages can be made worthless with large losses

But if you think about it, this is really just default human nature. Think about the last time you woke up in the morning, opened your platform, and saw an overnight loss of 200 pips staring you in the face.

First, you probably felt a small punch to the stomach; this is natural.

Then, you probably started trying to rationalize with yourself. “Well, it can come back. Maybe I’ll just give it a little more room to work.”

Later, after this didn’t work you, you begin bargaining: “Well, if this comes back to my entry price I’ll close it out… and I’ll never trade without a stop again!”

This is an example of being greedy, when you should probably have been afraid. This trade showed you a loss; and the analysis that put you into the position in the first place is obviously no longer valid.

So, just because you opened the position 200 pips ago, you have to make those pips back in that single trade?

This one may come back. And the next one might even come back to your entry price, too. But eventually, one of those trades is going to get away from you.

Let’s look at the other side of the coin. Let’s say that you wake up in the morning, and you see your trade placed last night is up 50 pips. This is one of those little ‘oh ya!’ moments that you get in the morning in which you’re probably too tired to do anything; but it still feels good none-the-less.

But, as you think about it – you don’t like the idea of giving up this 50 pip profit. After all, markets can be chaotic, and these 50 pips can go away just as easily as they collected. ‘What the heck, nobody ever went broke taking profits, right?’

This is fear. This is fear when you should be, in fact, greedy. This trade has shown you that you’re right, why would you want to cut the gain short?

Certainly, there is the chance that the position can come back to haunt you, but once again – we’re playing probabilities here, and this is one of those situations that you’re winning! This is when you want to be greedy.

The Importance of Positivity

Trading involves forecasting future price movements in an effort to make money off those predictions. You can use something like the strategy we outlined in The Potent Combination of Fundamentals and Price Action to get the probabilities on your side as much as possible... but the risk of failure is going to be part of every trade you take.

There is just one problem: No human being can tell the future.

Likely, that negativity will persist. And if future trades end up failing, the negativity grows and gets worse. Eventually, trading isn’t fun anymore and you no longer want to do it.

Don’t worry, this happens to everybody. This is usually the make-or-break moment in a trader’s career that determines whether or not they’re going to continue striving for profitability or whether they’ll look for greener pastures elsewhere.

All because someone beats themselves up for not being able to tell the future!

If trading profitably isn’t based around Prediction, then what?

If you look at matters rationally, you have to admit that you will never be able to tell the future; which means that any individual trade can work against you and cost you money.

Deductive logic then dictates that trading profitably is a numbers game; just like many other ventures in life in which probabilities dictate results.

This is just like sales, or sports, or weather forecasting; anything in which ‘chance’ or probability plays a role. And just like any of those other areas of life, if you allow just one or two failures to ruin your frame-of-mind, you’re not going to be very good on subsequent attempts.

So, you can’t allow yourself to get bogged down from the inevitable negativity that comes with losing. You have to adopt a more proactive way to look at markets.

An easy way to look at the ‘sunny-side up’

Each time you enter a trade, assume that you are going to lose.

I know that this sounds funny; maybe even stupid or self-defeating. But after you’ve done this long enough, you can see the value in preparing yourself for the worst case scenario, and here’s why: Because you are going to see the worst case scenario. And if you aren’t expecting it, it’s like that shot of negativity that we mentioned above.

This does something else that's pretty important: It ensures that any loss you take in a position will be minimal. Because if you are looking at each trade as an expenditure of capital for a chance (and only a chance) to make more, you’ll likely be more conservative with that capital.

When you enter a position, look at the amount you have risked as a sunk cost that is being paid for the opportunity to make money on that trade. The trade may work it, or it may not – but the amount you put up to risk is a cost of doing business in search of opportunities.

The following analogy that many may be familiar with can be easily adapted to trading:

You own a small clothing store and you’re looking to make a profit. Well, the first thing you’ve got to do is get some inventory, because you can’t sell ‘nothing,’ right?

So, you have to spend some money to make some money, and you buy some inventory to sell at your store.

Likely, some items will remain unsold, so some of what you bought will end up being unprofitable. But the garments that do sell are what allow you to pay your overhead, put some money in your pocket, and put food on the table; while allowing enough to re-invest in the business so you can move through the cycle all over again.

Just like a small business owner, it is your job to find profitable opportunities. Some of those opportunities won’t work, and some will. But if you allow the ones that don’t work to affect you, you aren’t going to want to spend much time doing this.

But looking at each trade as a simple opportunity, and assuming that each time you enter a trade that you are paying a ‘sunk cost’ for that opportunity, it can allows you to get much more enjoyment out of markets by being pleasantly surprised when you win, and shrugging off losses as just another opportunity that didn’t work out this time.

This is business… and it’s just a numbers game.