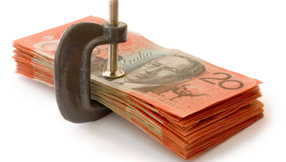 -We go over the five most common bearish reversal patterns in the forex market.

-Traders can look to these setups to institute strong risk-reward plays.

One of the more exciting technical setups in the Forex market has to be the reversal. After all, as human beings - we’re wired to look for these setups. As evidence, simply look at the efficacy of The Speculative Sentiment Index during really long trends.

Like when AUD/USD moved over 1000 pips in a few months earlier in 2013, and retail traders continued to stay long looking for prices to move back to the previously-defined range on the Aussie.

This is just one example, but this happens all the time. That’s why SSI is such a fantastic contrarian indicator.

But nonetheless, there are better way to look for reversals in markets that to simply fade a strong trend and ‘hope’ that it reverses. This is where price action can come in. Reversals are, by nature, counter-trend trades; because after all, we’re looking for price to reverse from its recent trajectory.

To look at it purely as a counter-trend position, however, could be doing a great deal of disservice to the strategy.

Looking at Reversals in a Different Light

A reversal may seem daunting when considering that we’re looking for the entire tide of the market to completely reverse course; but what if we look at timing from a different scope?

Multiple Time Frame Analysis can help us get a different vantage point on the market.. We can use longer time frames to define the general trend; and a shorter time frame to get more precise and look for sub-trends and retracements.

So, for example, let’s say that there has been an uptrend in a currency pair, such as the recent move in GBPUSD.

After the uptrend sets in, price continues that familiar price action gyration of making higher-highs, and higher-lows. It’s when price is in the process of making new ‘higher-lows’ that things start getting interesting. Because it’s in that range of time that traders can start looking for reversals of the short-term trend, for a return of the long-term trend.

How to Trigger Entries

Much like we looked at in the article, Using Price Action to Catch Swings in The Forex Market, traders can utilize a 4 step process to institute this strategy. Also as we explained, indecision (congestion, consolidation, etc) in the market often see multiple indecisive candlesticks form before prices begin making significant movements.

Reversals can be similar. We may see multiple reversal formations or patterns form before the actual reversal takes place. Meaning, these entry triggers are like many other indicators available to the trader; they are simply indications and need to be accompanied by strong risk, trade, and money management.

Below, we’ll focus on Bearish Reversal patterns, and we’re going to show the five most common in the Forex market. We’ll also explain how each pattern can be approached, and what traders may want to look for when triggering the trade. In our next article, we’ll tackle bullish reversal formations.

The Bearish Engulfing Pattern says quite a bit about price movements during that candle’s period. This is a single-bar candlestick that has a higher-high, and a lower-low than the previous bar. This pattern is also called an Outside Vertical Bar.

A Bearish Engulfing Pattern before a Massive Reversal

This candlestick can be traded by looking for momentum to continue in the direction that the candle has printed. In this case, we’re looking for Bearish Reversals, so the trader can look to go short after this candle prints, with a stop above the high, and a minimum risk-reward ratio of 1-to-1.

Traders can also utilize a break-even stop, so that if the reversal doesn’t end up panning out, the trader can see the position closed before a loss is incurred.

The Shooting Star formation is another candlestick that says quite a bit about the technical environment.

A shooting star is a candlestick with a long wick on the top of the candle, and a full, bearish body at the bottom of the candle. The picture below will illustrate further.

The Shooting Star in front of a strong bearish reversal 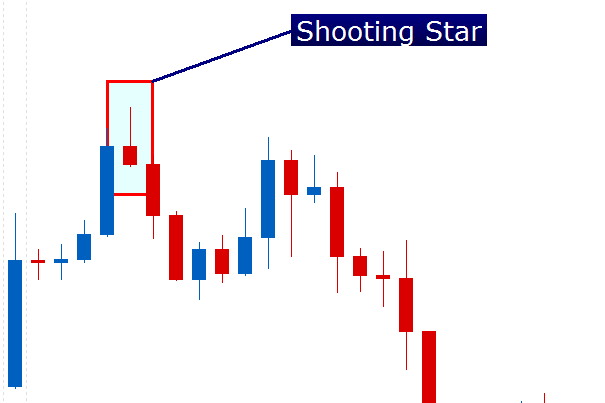 This is another reversal pattern that will often show up around the top a trend. The Hanging Man is noted by its bearish candle body, with long wick to the downside of the candle.

During this candle’s formation, price was offered lower only to see buyers come in to support. If the momentum that initially triggered the bearishness that sparked this candle can come back, the reversal will set and the trader can begin riding the new trend at a very early stage.

A Hanging Man Formation in front of a Bearish Reversal 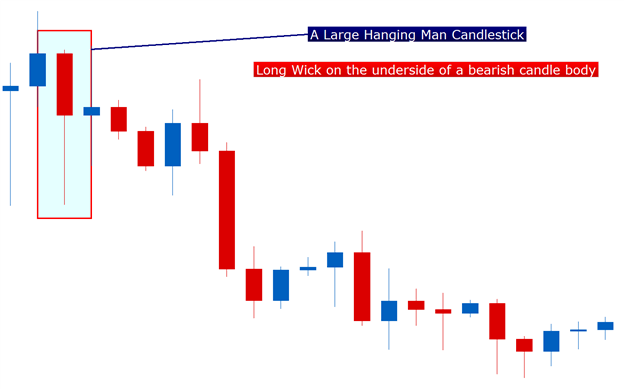 The Evening Star formation is a three-candle pattern that will also often show up at the top of a trend.

As a matter of fact, the first candle in the evening star formation is a large bullish candle. The second candle is where things begin to get interesting, as this should be an indecisive candlestick. And that could be an inside bar, a spinning top, or any variation of the many dojis that exist.

Whether it’s a long-legged doji or a traditional doji that would make the evening star formation more precise with the title of the Evening doji Star. 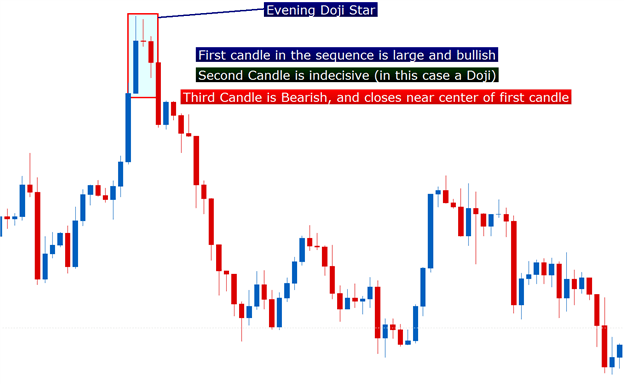 This formation highlights long wicks that stick out from recent price action, much like Pinocchio’s nose. It also serves in telling the trader when the market was lying; or more precisely, when market prices were so far off from where they should have been, that the initiation of a reversal took place.

Its attraction is logical... The Bearish Pin Bar has a wick that is at least the size of the candle body sticking out of the top side of the candle; and that wick should stick out from previous resistance.

During the candle formation, price ran very high on a relative basis, only to see sellers come in with a brutal correction that more than traversed the open of the candle.

If a long wick is sitting atop a candle body less than half the size of the wick, but yet the candle does not stick out from price action, then it’s not a true pin bar. That’s known as a ‘fake pin bar.’

The Pin Bar is traded in much the same way as the shooting star formation. Traders can look to place their stop above the ‘eye’ of the pin (shown below), and then can look for profits at least the size of their initial stop.

Where should I place my stop loss and take profit?