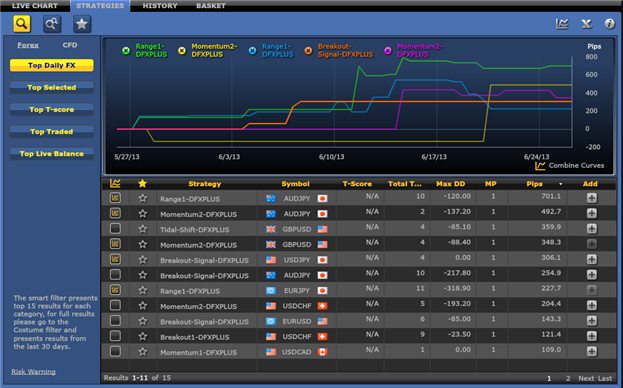 Summary: Over this four-part article series, we’re going to introduce and explain the basics of system trading. In our first article, System Trading 101, we introduced the concept of using systems and strategies. In our last article, System Trading 102, we looked at risk management of a systems-based approach. In this article, we look at system evaluation, and on our next, we focus on diversification of a portfolio.

Probably the most important part of employing a system trading approach is choosing the right system or types of systems to speculate in the market.

There are a variety of ways of determining what the ‘right’ system should be. We’re going to go over a few of the popular metrics to take into account below.

A Word of Warning about Statistics

If you’ve been in the market long enough, you’ve surely seen the disclaimer that ‘past performance is not indicative of future results.’ By nature, many of the statistics that we can use to determine the viability of a strategy are based on past performance behavior.

This introduces an element of statistical sampling. Take, for instance, presidential election polls. During major elections, polling is very common amongst news organizations to get an idea for who may win an election. But, polling the entire voting body would be difficult to impossible. So, instead of polling every voter multiple times ahead of an election, sample polls are taken. The goal is to get a sample that is as representative as the voting populace as possible.

If a poll were to be taken of an upscale neighborhood only, the poll will likely not reflect the true results of the election as only a portion of the voting public are being analyzed. Or conversely, if only the down-trodden neighborhoods are polled, the consensus is unlikely to match the actual results as the sample is, once again, not properly representative of the entire voting body. Or perhaps a reporter goes out on to the street and asks just five people how they are voting. Well, now we are looking at an extremely small sample size that may not be representative of the group as a whole.

All of the above are ways that sampling can introduce problems into analysis. And because of this, it’s often important for traders to:

Match the Nature of the Strategy with the Desired Market Condition

While recent performance of a strategy may be misleading if market conditions are to change, such as breakout strategy showing massively successful results when volatility quiets and markets become considerably more range-bound, matching the design or nature of the strategy to the desired market condition can be one of the more proactive ways of choosing which systems to utilize.

For instance, in our System Trading 101 article, we looked at an example of a trader employing breakout-related systems in USDJPY in anticipation of volatility around an upcoming news announcement.

An easy way of doing this can be done with the DailyFX PLUS Trading Signals, which are organized by target market condition.

With the DailyFX PLUS Trading Signals on Mirror Trader, traders can match a strategy designed for the market condition that they anticipate taking place.

When choosing a system based on past performance, it’s important to see the ‘forest from the trees.’ That is, it’s important to avoid the scenario above in which a reporter expects to predict a presidential election by polling a mere five people.

Surely, those five that are interviewed have an opinion, and can cast a vote like anyone else in the voting body; but by checking with only five, our reporter runs the risk of making an assumption based on an extremely small sample size.

This can happen often with system trading, as traders check only the recent performance of a system before deciding to trade with it. And while a system may be showing amazing performance over the last couple of weeks, or months – it doesn’t mean that performance will continue.

It is of the upmost importance to use a sample size that is large enough so that we can properly analyze the strategy; and if not enough data is available, it’s important to discount the available statistics as being ‘unclear.’ As in, the strategy MAY perform as it looks to have performed, but it also may diverge from recent performance.

As we had discussed in System Trading 102, risk management could be of extreme importance to the system trader since multiple trades and positions can be opened in a short amount of time, and the trader may not be pulling the trigger for each and every entry.

One of the more prominent elements of risk management is in the risk-reward ratio of a system. Improper risk-reward ratios were found to be The Number One Mistake that Forex Traders make, and to the system trader, this mistake can end up being catastrophic.

As instructed by the DailyFX Traits of Successful Traders research, traders should always look for a minimum of a one-to-one risk-to-reward ratio. So, if $1 is being risked – the trader should make absolutely sure that the strategy is looking to gain at least $1 in return.

This information can often be found under the ‘average win,’ and the ‘average loss,’ information of the strategy. In the graphic below, we take a look at the ‘Range 1’ system for AUDJPY, as found on Mirror Trader at the time of this writing. 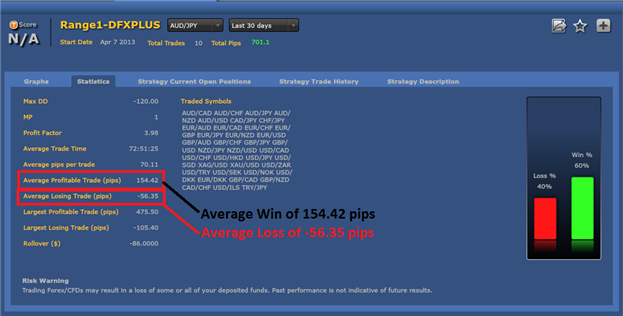 Risk and Reward is one of the most important quotients for grading the potential effectiveness of a strategy.

The other element of a strategy’s profitability after risk and reward is the win/loss ratio. This is what newer traders often focus on, unaware that poor risk-reward ratios can completely nullify even the best win/loss ratios.

In System Trading 102, we looked at such an example. Assume that a trader utilized a 10 pip profit target with a 1,000 pip stop. As long as the market continues doing what the system anticipates it to do, the strategy’s performance can look fantastic. After all, a 1,000 pip stop could take considerably longer to be met than a 10 pip profit target. But as soon as those stops start getting hit, the viability of the strategy starts going down massively.

And every stop that gets hit wipes away the gains of at least 100 wins. So, this strategy can show a 99% win ratio, and still be a massive loser. And if the strategy happens to win at only 95% or 98% - both aggressive winning percentages – the strategy as a whole will still lose money. 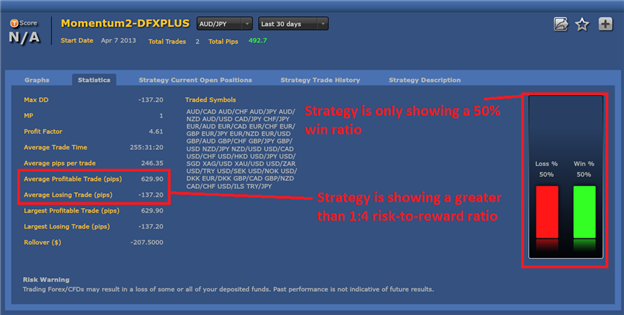 In an effort to work around the complications that can be produced by examining the above two statistics, traders created another number to analyze in an effort to grade a strategy’s effectiveness.

If the data comprises a large enough sample, this can be hugely beneficial to traders as it takes into account both average winning percentage, as well as the average risk-reward ratio.

A good rule of thumb for traders looking at profit factors is to attempt to find strategies with a profit factor of 2 or greater; showing that they’ve won 2 dollars for every 1 that was lost in the observed period.

Want to learn more about Mirror trader? Join us for a live walkthrough Wednesdays at 3PM Eastern Time.

New to the FX Market? Save hours in figuring out what Forex trading is all about.

Take this free 20 minute ‘New to FX’ course presented by DailyFX Education. In the course, you will learn about the basics of a Forex transaction, what leverage is, and how to determine an appropriate amount of leverage in your trading.